It’s that time of year again …

The time of year when we wind down one year in anticipation of the next by taking a final look back at the best of the best content published here at Copyblogger during the last calendar year. It’s become an annual tradition.

But first, I want to highlight the best Copyblogger moment from 2014.

And it’s an easy one to pinpoint.

It’s the moment when our entire team received an ovation at the conclusion of Authority Intensive in May (see image above, taken by Godhammer).

I’ve never been prouder to be a member of the Copyblogger team, and I can’t wait to have an even better experience in May 2015 at Authority Rainmaker.

I hope you’ll join us.

And now, without further ado, here are the best posts published on Copyblogger in 2014, as chosen by our staff and by you (based on your visits and shares).

Favorites from the founder and CEO

Let’s start with recommendations from the man who started it all nearly a decade ago, Brian Clark.

And for those, I will direct your attention to the sidebar. See where it says “Popular Articles?” That list is curated by Mr. Clark. So anytime you want to know what he thinks is an especially excellent Copyblogger post, just browse that list.

I’ll highlight five here that didn’t make it onto other lists below:

As for other editorial team picks …

Sonia has come to dread lists like these, where she’s asked to choose between so many of her favorite posts. (Because all of her children are gorgeous, of course.)

Here’s a sampling of great posts that didn’t come from the blog’s editorial team, and that are well worth your attention.

I speak for our entire staff when I say we hope Demian doesn’t read that last little note. It might go to his head. 😉

Kelton also added this commentary: “And of course every Rainmaker.FM episode/post.”

Which leads us to …

To access every episode of Rainmaker.FM, click here. A few you absolutely do not want to miss are:

And now to hand out some hardware …

(Note: To qualify for one of the awards below, the post had to be published in 2014.)

The above post also wins the Repurposing Award for 2014 — as it was comprised of repurposed ideas from the archive while also being repurposed itself into a popular podcast series on The Lede.

The Post That Attracted the Most Visitors from Google: 12 Examples of Native Ads (And Why They Work)

The Post That Attracted the Most Visitors from RSS Readers: Here’s How Elizabeth Gilbert (Bestselling Author of Eat, Pray, Love) Writes

The Post That Attracted the Most Visitors from Google+: SEO is Dead: Long Live OC/DC

The Post That Drove the Most Traffic from an External Link: A 3-Step Formula for Captivating Your Audience With a Few Opening Lines

The Most Popular Post with “Damn” in the Headline: Why a Legendary Album and a Viral Hoax Should Inspire You to Create Content That’s Worth a Damn

The Most Popular Case Study: How One Veteran’s Podcast Built a Million-Dollar Business

The Most Popular Podcast Post: The Lede: How to Write a Magnetic Headline (in Under 15 Minutes)

The Podcast That Featured the Most Laughter: The Lede: Hangout Hot Seat with Brian Clark

The Most Popular Post That Closes with an Animated GIF of Emma Stone: Should Your Site’s Design Be Sexy or Smart?

The Post Most Likely to Freak You Out When the Post Image … Moves: 3 Ways Your Web Design Can Better Connect You to Your Audience

The Post Most Likely to Draw the Ire of Mark Cuban: Why Shark Tank is Terrible for Your Business

The Most Popular Parable by Robert Bruce: The Decline and Fall of The Great Gate (and to the chagrin of us all, this was also the only Robert Bruce parable of 2014.)

And here are a few additional posts I personally loved that deserve one final shout-out (and read-through) in 2014:

There were a lot of great ones to choose from, but the one below was clearly the winner, from our April Fools post 3 Ways to Write a Damn Good Syllable: 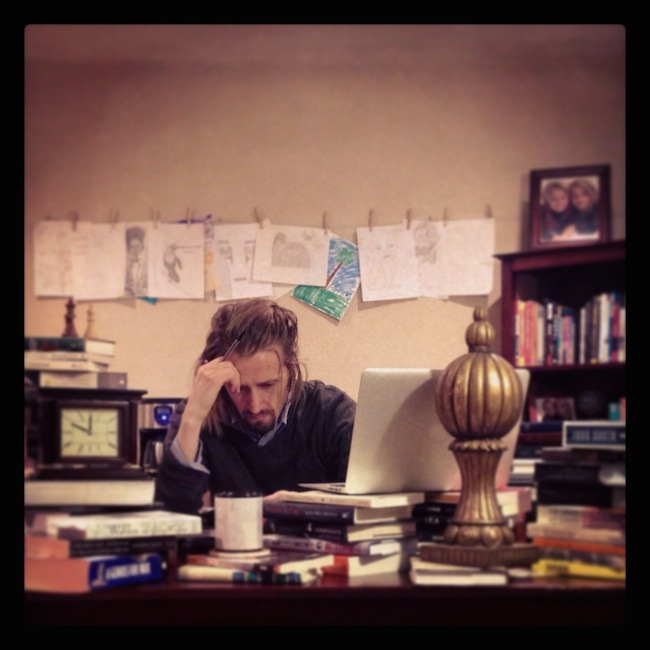 That picture might as well be Demian right now, as he puts the finishing touches on Copyblogger’s Cost of Online Business Report, which will be out early in 2015. Stay tuned …

In the meantime, thank you for helping make 2014 such a special one for us here at Copyblogger.

Programming note: Sonia will be here tomorrow with final thoughts to carry you triumphantly into 2015.

We’d love to hear about the posts you enjoyed the most this year.

Join us over on our LinkedIn discussion group to share your own favorites!

Previous article: Here’s How Daniel Pink Writes
Next article: My Challenge to You for 2015: Only Connect