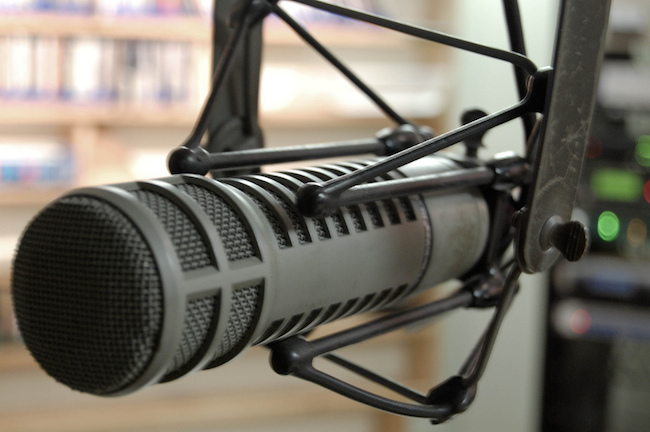 He couldn’t shake the feeling that his real calling was still out there — that there must be a way for him to feel excited to go to work every day.

He took a leap of faith and launched an interview-based business podcast called EntrepreneurOnFire. Within its first few months, the podcast became a top-ranked iTunes business podcast and earned a coveted spot on the “Best of iTunes” list.

The podcast is now the cornerstone (and biggest lead generator) of a thriving business that regularly brings in six figures each month.

Is John excited to go to work? You bet he is.

I sat down with John and asked him to share the secrets of his success and how he turned a unique idea for a podcast into the business of his dreams.

Ignoring the skeptics and launching a crazy idea

Back then, John was a real estate agent who spent a ton of time in his car. He passed the time by listening to podcasts, but noticed he finished weekly podcast episodes faster than his favorite podcasters could create them.

He wondered if other podcast listeners experienced the same problem.

One day, John had a moment of life-changing inspiration that started with a simple question. He asked himself, “Why doesn’t someone create a business podcast that publishes episodes seven days a week?”

The idea stuck, and John started taking steps to create a daily business podcast with useful content for entrepreneurs and business owners.

However, the production schedule required to publish seven-day-a-week podcast episodes was daunting. And he encountered many naysayers.

John’s advisors told him the idea would fail. They looked at the market and said, “No one else is doing this. There’s no way it will work.”

But John has always subscribed to the “blue-ocean” strategy of business — so his mentors’ doubts actually confirmed his decision and made him even more determined to get his daily podcast off the ground.

After three months of intense work, John launched the first episode of the EntrepreneurOnFire podcast in September 2012. He kept his word and published a podcast episode every single day — no matter what.

In the first few months after his launch, John snagged some early wins. iTunes listed the podcast as “New and Noteworthy,” and he landed interviews with high-profile guests, like Shark Tank’s Barbara Corcoran and author Tim Ferriss.

EntrepreneurOnFire grew a big fan base of loyal listeners. As it turns out, John’s big idea wasn’t so crazy after all.

Of course, once you have a great, marketable idea, you’ve got to get organized and implement that idea in a smart, scalable way.

Over time, John built the online structures he needed to build an EntrepreneurOnFire empire — not just a podcast.

He launched a blog, where he published posts that provided advice for entrepreneurs trying to grow or monetize their businesses. He also built an email autoresponder series called The Fire Path, and weekly newsletter subscribers grew to more than 14,000 people.

John built his business on the basic rules of smart content marketing — providing free, relevant content to his audience on a daily basis.

His audience members love him for it.

As the podcast grew in popularity, John attracted a number of sponsors willing to pay for exposure to his audience, and he quickly grew his sponsorship income to $46,000 a month. And while it definitely made sense to take on sponsors for his show, John didn’t want sponsorships to be his only source of income.

So he listened to his audience, figured out what they needed most, and provided it. Now he sells a number of products and services to serve his community members.

Last year, EntrepreneurOnFire started publishing monthly reports detailing the business’s income and expenses. Here are some of their biggest streams of income for June 2014:

After John’s initial inspiration struck, he immersed himself in the launch of the new podcast.

Within one month of my ‘aha’ moment — which literally came out of nowhere — I had quit my job and hired my mentor. Within three months of that, I launched my podcast.

John’s goal was to provide as much value as possible with his podcast interviews and attract people who liked his content and message.

One of the primary benefits about taking immediate, bold action is that you see results quickly, which helps you gain momentum and motivation to keep going.

Once John launched the show, he attracted an amazing community of like-minded people who supported his mission and loved his content. He called them the “Fire Nation,” and once his community started to grow, he became even more driven to provide them with top-notch content.

Secret #4: Listen to your audience

John had an existing client base when he was ready to create (paid) products and services. His audience members already knew and trusted him, and they appreciated the great content he published every day.

But before he built anything to sell, he listened. John then created solutions for his audience’s problems.

Listening to my audience has shaped every [inspiration] I’ve had in my business. They speak, and I listen. I kept hearing that they didn’t know how to start their podcasts and they needed support because they felt alone.

John published his ebook, Podcast Launch, in early 2013. After that, he created and launched a membership site, Podcaster’s Paradise, which provides how-to information and professional support for podcasters.

Now he has a suite of products and services that are custom-made for his entrepreneurial fans.

John made critical connections early in his podcasting career.

He hired a business coach right away, and she introduced him to key players in their industry. Those connections have shaped John’s journey with EntrepreneurOnFire.

He realized that many successful entrepreneurs all have large platforms of fans and followers. When he published his interviews with entrepreneurs, those guests shared the episodes with their audiences via email and social networking sites.

In 2013, I was a guest on John’s show. Before, during, and after my interview with him, I noticed John’s incredible organization and how he used templates and systems for every aspect of his podcast process. For example:

It was the easiest, smoothest interview I’d ever done, and I remember thinking, “John Dumas is going to take over the world.”

Clear systems for every aspect of John’s business enable him to publish a podcast seven days a week.

What’s next for this wildly successful podcaster?

When it comes to business strategy, John recommends that entrepreneurs FOCUS (Follow One Course Until Success). John and his team expand and promote their existing products.

Since the EntrepreneurOnFire podcast is still the engine that makes their entire business possible, they continue to create killer daily content for their fans.

So, what is John’s advice for other podcasters and online marketers? He says:

Just start! So many entrepreneurs let fear and the unknown stand in their way of building their dreams. You have to make a lot of sacrifices, and there are a lot of times when you’re going to want to give up.

Are you ready to turn your wild idea into reality?

It’s your time to start

What’s the first step you can take to build your online media business?

Let’s go over to Google+ and discuss taking action!

Are you ready to build your online empire like John?

Then you’re going to need a solid, secure, easy-to-use foundation.

Check out Copyblogger’s Rainmaker platform, which gives you everything you need to start an attractive, functional, secure website.

It’s a blank canvas you can use to create dynamic media, including a podcast, coaching business, or information marketing venture — anything you want.

Get started with Rainmaker today.