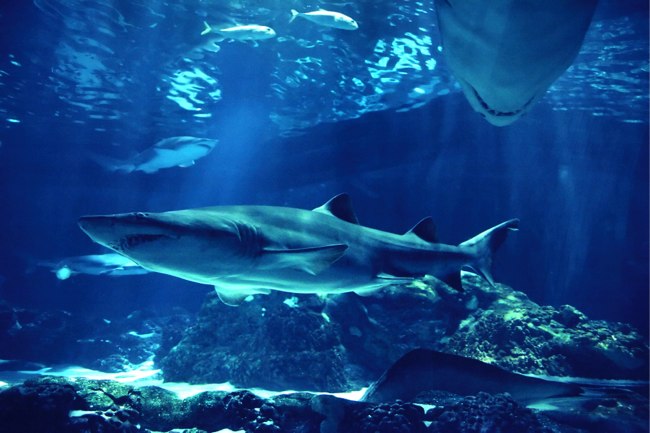 Maybe they’ll take away my Entrepreneur’s Secret Hat and Decoder Ring for saying this, but I hate Shark Tank.

My husband and son like it, and every time it comes on, my teeth start to grind and my eye does that little twitchy thing.

I’m not saying the investors don’t give some decent advice. They do. And most of the Sharks seem like reasonable people. (With Kevin O’Leary doing his duty as designated villain, obligatory on most reality shows.)

The fundamental premise of Shark Tank is that people who have had big wins in business will automatically know more about your business than you do.

And underneath that is the part I really hate — the idea that some of us just have that “entrepreneurial gene,” and some don’t.

The Sharks have had some significant wins, so they’re “smart.” And as a small business owner? You’re just some fool who’s naive enough to think you can make a go of it on your own.

And so contestants audition for the right to go begging, hat in hand, to a handful of appointed gurus who might deign to take a large chunk of their business in exchange for a small amount of money. If they’re very very lucky.

Owning a business is something normal people do

You don’t have to have some kind of special gene or supernatural ability to start and run a successful business.

(And of course, those of us who do business online have some nice advantages in terms of costs, complexity, and scalability — which makes running a successful business even more doable.)

The traits you need to be a successful business owner aren’t the kind you read about in glossy business magazines, or their blogs.

The biggest trait you need is plenty of is stubbornness, but that can be boosted with the right support and encouragement. And it’s best when it’s paired with a solid ability to look realistically at the situation in front of you, and figure out the wisest next steps. (The right support can be useful there as well.)

I have known incredibly successful entrepreneurs who can barely tie their shoes. (No, not the crew I work with now, this group are all pretty awesome.) 🙂

But they knew their business. And they knew what it took to be successful. On balance, moments of entrepreneurial delusion notwithstanding, they understood their audience of customers and what that audience needed.

Once you have that, everything else is just a matter of hanging in there and figuring stuff out.

As always on “reality” television, a big part of the entertainment value comes from feeling superior to the deluded contestants.

Entrepreneurial is, after all, something of a synonym for “unemployable.”

But you don’t need a Shark Tank to find your blind spots.

The litmus test between delusion and confidence is your audience. If they’re following, sharing, and connecting with your content, you’re on to something. If they’re paying attention to you and they actually buy something, that’s your green light. Move forward with confidence.

For example, on the show Kevin rolled his eyes at brother and sister founders of Pipcorn for selling their specialty popcorn at $5 a bag, when regular old popcorn is maybe $1.50 a bag.

Apparently he’s never been inside a Whole Foods. Where Pipcorn was, in fact, already selling plenty of bags of their fancy popcorn. You know, on that aisle in Whole Foods where all the $5 popcorn is.

The most brilliant investor isn’t as smart as your audience about what’s going to make your business work.

I heard a piece of advice last year that blew me away. It comes from business coach Dan Sullivan, and it’s this: The first duty of every entrepreneur is to protect your confidence.

That, I believe, is where that “mindful stubbornness” comes from.

When you’re in negotiations with someone you shouldn’t be working with, that person may “neg” you — put you and your company down in order to make themselves seem like someone you need. It’s a technique used by the creepy “Pick Up Artist” community, and it’s also used by unethical marketers. (“Buy my product and maybe your friends won’t hate you so much!”)

Investors are not necessarily smarter than you are about your audience and customers. And thinking that they are can destroy a great little business. I’ve seen it happen first-hand more than once, and it makes me angry when it does.

Protect your confidence. And if a potential partner “negs” you, it’s an unmistakeable sign that you need to go the other direction. The negativity will corrode your business faster than any cash infusion can build it. Don’t look back.

In the immortal words of Annie Lennox, everybody’s looking for something.

In the Shark Tank universe, the contestant “wins” if they get a deal, and “loses” if they don’t.

But “failed” contestant Julie Busha of Slawsa saw through this, and wrote about it on her blog:

They like to invest in businesses where they can give added value (Daymond wants to plug something into his overseas manufacturing pipeline, Lori wants to get an item on QVC, Mark & Robert want tech…and of course, Kevin wants a royalty). ~ Slawsa on Shark Tank

By Busha’s own analysis, if she’d made a deal, she would have “won” the game — but at a grave cost. She would have given away part of her business to a partner who didn’t really have anything to add.

(This is the part where I tip my hat to the integrity of the Sharks for not making a deal where they didn’t add value — even though they thought the product was excellent and were complimentary of Busha’s business skills.)

If you don’t have what your partner wants, there’s no deal to be made. Don’t obsess. Move on and find a better fit.

Try not to squander your energy or confidence thinking about a business partner, promotion partner, or customer who “just isn’t that into you.”

The way that Shark Tank is amazing for their contestants

I said above that Julie Busha didn’t “win” the show, but of course she did.

She was asking for $150,000, which she didn’t get. She did, however, get eight minutes on prime-time television on a popular show — and in the form of content, not advertising, so viewers were actually paying close attention.

She gave up no equity in her business, but received millions of dollars’ worth of advertising. Or more to the point, content, which, as we know, works a whole lot better than advertising.

So as an advertising and promotion vehicle for small business, I guess I don’t hate Shark Tank after all. In fact, I see an awful lot of the “failed” company products on the shelves of my local stores. And I notice them, because they had an eight-minute pitch to show me exactly why they were cool.

But I still don’t want you listening to anything Kevin O’Leary has to say. That guy doesn’t know beans about your business.

What do you think? Join the discussion here in our LinkedIn discussion group.

Previous article: 10 Essential Tips for Creating Mobile-Friendly Emails
Next article: Adaptive Content: A Trend to Pay Attention to in 2015