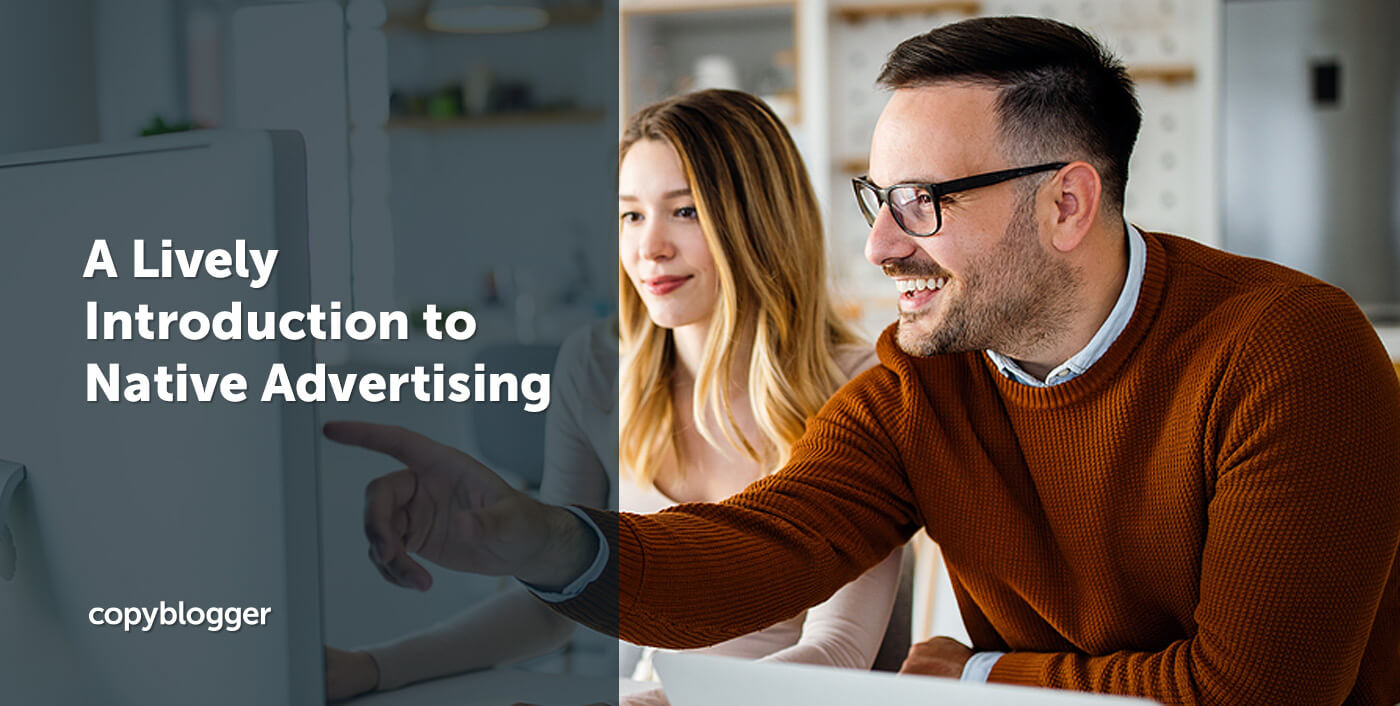 Despite all the hype, native advertising remains a fuzzy concept, even for people who work in content marketing.

So, given the lack of awareness (and people mistaking it for other things, like sponsorship), we thought it would be a good idea to give you a lively introduction to native advertising.

We’ll also walk you through about a dozen examples of native ads — and why they work.

What is native advertising?

I didn’t originally consider promoted content — such as sponsored posts in Facebook or promoted tweets — to be native advertising. I’d include in-feed ads and Google AdWords text ads in that claim, too.

Facebook and Twitter fail this definition because neither are publishers. The same is true with Google AdWords. They do not have a conventional editorial branch to speak of.

In Twitter’s and Facebook’s case, this is user-generated content that brands pay to reshare. None of these are pretending to be publisher-produced editorial content. In Google’s case, it’s just an advertiser paying to get in front of an audience.

However, Sharethrough’s definition of native advertising disagrees with me. I confess, after further research, they’ve got a point.

There is a sense that this species of advertising — sponsored posts and promoted tweets — is native because it appears in the social stream or among search listings.

So, in the advertising taxonomy, promoted content would be related to advertorials. But, in my opinion, it has to be a different genus because it’s not editorial.

In other words, I’m admitting I was wrong. Sort of. 😀

You’ll see more on this below.

How does native advertising work?

“Good native ads are content that’s about the reader, watcher, or listener. But ultimately there’s an actionable goal for the advertiser.”

Therefore, the experience for the user is different from their typical experience with copy and design that is obviously an ad. A blatant ad is more disruptive, because it looks out of place next to the publication’s regular content.

12 examples of native ads (and why they work)

Once you see some smart native advertising examples, it’s much easier to understand why someone might choose to use this type of promotion.

Let’s take a closer look at some native ads you’ve probably come across yourself.

Let’s start with the basics: the advertorial.

David Ogilvy’s “Guinness Guide to Oysters” is the quintessential advertorial. When people talk about advertorials they usually mention this ad.

At a quick glance, it looks like editorial content. In other words, if you removed the brand name, it would fit the style of the publication.

The Guinness Guide, however, is a print ad, which leads to this question: would an advertorial work online? Let’s see.

This is IBM on Atlantic:

As you can see it’s labeled “Sponsor Content.” And except for the header and navigation bar, it is embedded among other IBM content. Yet it matches the editorial and design style of Atlantic.

Is this an advertorial? No. There is not a clear call to action. It is, therefore, sponsored or branded content.

The article sits on the Gawker root domain and the design and editorial style match Gawker’s.

Yes, an advertorial can be a video, which is exactly what The Onion has done through their Onion Labs creative agency.

They’ve created videos for companies such as Southwest Airlines and Microsoft.

I think it is safe to say the Atlantic’s failed Scientology experiment embedded the term “native advertising” into our collective advertising consciousness.

Before their experiment, the earliest search for the term “native advertising” appears in February 2011, and it didn’t climb into double-digit searches until November 2012.

Here’s the advertorial in question, one they pulled shortly after it was published:

Why did they pull it? This is what the critics claim Atlantic did wrong:

They also forgot a clear call to action.

The joke, however, is on Scientology and not Atlantic. The religious organization is just a poor advertiser. In fact, I’m surprised Atlantic bowed to the pressure. If the ad was so sneaky, why did so many people complain?

Sponsored content is what a publisher creates and then a brand pays for. This is what The Onion did for H&R Block.

There is no clear call to action, so this content serves as brand awareness.

An offline example of sponsored content is Mutual of Omaha’s Wild Kingdom. The insurance company Mutual of Omaha footed the bill for production. No call to action, just brand awareness.

In the print world a single-sponsor issue is when a single advertiser sponsors an entire issue of a magazine.

The most famous example occurred in August 2005 when Target bought all the ad space (about 18 pages, including the cover) in the August 22 issue of The New Yorker.

As Stuart Elliott wrote when he originally reported on the campaign,

“The goal of a single-sponsor issue is the same as it is when an advertiser buys all the commercial time in an episode of a television series: attract attention by uncluttering the ad environment.”

Again, in this case, no clear call to action, just brand awareness.

The way this works online is similar: a single sponsor buys all of the ad inventory on a website (or network of related websites) for a certain time period — a day, half a day, or even just an hour.

Subway, for example, does this often on sports websites, usually timed to coincide with specific noteworthy events.

The only difference between sponsored and branded content is that the brand creates the content for the publisher.

As you can see, being precise about our terms is confusing because there is not an advertising standard when it comes to paid content labels.

You could lump branded playlists on Spotify into this category, too.

While the brand doesn’t always create the music (Sesame Street, however, did), they do curate the songs around a theme.

Jaguar USA, and Abercrombie + Fitch are other great examples.

A classic example of product placement was the bottle of Red Stripe in the 1993 film The Firm.

Or the Coke cups American Idol judges drink from.

Or the Reese’s Pieces in the movie E.T.

But what about online examples?

I’ve seen product placement in Onion pieces, like this one for the Canon PowerShot S1100 IS digital camera:

Did Canon pay for this ad? According to their advertising department, no. So why the precision?

If there was no commercial intent, why not just say “a Canon,” or simply “a camera” for that matter? They have not responded yet.

Again, product placement is more about building brand awareness. There is no clear call to action. And unlike the H&R Block example, the content is not surrounded by Canon banner ads.

You’ve seen these widgets that recommend content from “Around the Web.”

All these links do is push you to content on other publishing sites, with a few commercial mixed in.

Companies like Sharethrough and Outbrain provide the network to run such ads, and advertisers pay for the clicks.

And finally are the in-feed ads that drive you to another website. You know what I’m talking about.

The words sit underneath the bold black title “Trending Around the Web” with “ADVERTISEMENT” sitting quietly to the right in a light grey font.

These ads have an editorial feel about them, as do the websites they drive you to — but clearly they have a commercial intent. Despite our distaste for these, I have a hunch they work for the advertiser. Because they have not gone away.

I could not find a good example of a sponsored post on Facebook. Is this because I am NEVER there? You more than likely know what I’m talking about, though.

You can read up on Sponsored posts here.

Can you spot the ads?

Life on Bing is no different.

I mentioned a few aspects of native advertising above that require further explanation.

If your question hasn’t already been answered, check out these common inquiries about the topic.

Why is native advertising controversial?

You might be wondering if native advertising is ethical. The answer will vary depending on who you’re talking to, but a main concern is that it deceives consumers.

Those who come across a native ad might treat it like information from an unbiased publication — when in fact the publication has received some form of compensation to run the information.

However, if the content is clearly labeled as an advertisement, this shouldn’t be a problem.

How do you spot native advertising?

When a native ad is properly labeled as an advertisement with text that simply says “advertisement” or something similar, you’ll know that even though the ad may look like a regular article or video, its placement was intentional.

In other words, the publication planned to showcase the native ad in a place where they thought it would get a lot of engagement (making the ad payoff for the sponsor of the content).

How much does native advertising cost?

The size of a publication’s audience will determine how much they charge for native advertising. A larger publication has the luxury of charging more because the ad will reach more people.

It will also depend on the length and style of the native ad, much like how you would determine the cost of other types of advertising.

Where does content marketing fall in respect to native advertising?

They are born of the same stock and have the same goal in mind, but the main difference is this: with content marketing the brand becomes the publisher.

In each case the brand creates content that informs, educates, or entertains. It’s how you build an audience that builds your business.

And for a final comparison, guest posting is non-paid content that drives traffic to the content on your domain.

There you have it! An introduction to native advertising that helps distinguish it from other types of advertising.