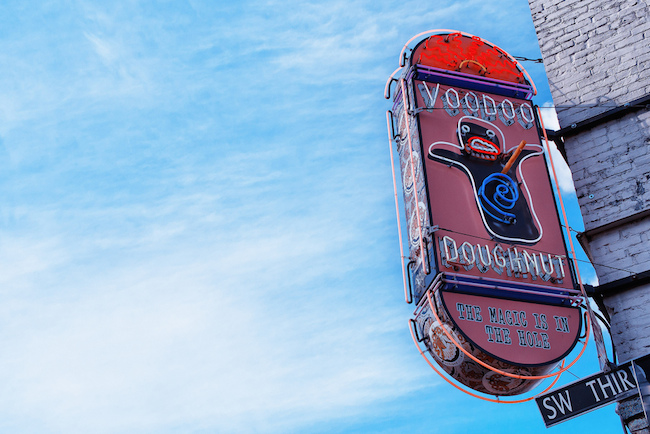 The line, even on the bitterest winter nights, extends out the door and down the block.

The neighborhood could charitably be described as “gritty” — known for marijuana dispensaries, tattoo parlors, and bars. (And those are the legal businesses.)

The walls are Pepto-Bismol pink, graced with a black velvet painting of a stern-looking Pam Grier. The place smells like … well, like a doughnut shop — that delicious yet faintly disgusting scent of industrial fryers.

The menu on the wall is illegibly tiny (even for 20-somethings on glaucoma medication), but everyone just pulls it up on their phone anyway. They take cash and only cash, and the cute tattooed employees at the cash register are friendly, if not necessarily efficient.

They’ve taken something ordinary (you might even call it a bit boring) and turned it into an enduring craze.

And yet, everything about the place turns off 95 percent of their potential customers.

The adjective most writers use for it is “legendary,” followed quickly by “funky” and “indulgent.” (I’m not sure why “insane” doesn’t make more appearances, frankly.)

They sold nearly 200,000 doughnuts before they officially opened, fiddling with their high-altitude recipes and opening at irregular hours during their “soft opening.”

It’s inconvenient, the lines can be absurdly long (you’ll wait up to two hours on a Saturday night, much of that time outside in the polar-vortex cold), and at the end of the day … they’re just doughnuts.

When Anthony Bourdain visited the original Voodoo in Portland with Chuck Palahniuk, he said of one of their signature items (the maple-bacon bar):

Only late-era Elvis on medication would eat this.

And yet … it’s the kind of place Anthony Bourdain takes Chuck Palahniuk when they’re in the mood for doughnuts.

Voodoo is doing some things very right. And even if your customers look a little different from the pierced-and-tattooed crowd that graces Voodoo, every business can benefit from their core marketing strategy.

Voodoo’s signature doughnut is shaped like a voodoo doll with a little pretzel-stick stake through its heart. They have a number of doughnuts on the menu that you can’t order without cursing.

(They did discontinue the Jägermeister doughnut as being too disgusting for any human being to eat.)

Do they taste better than other doughnuts? If you’ve been pining for bacon or breakfast cereal on your doughnuts, I guess so. Otherwise, they’re a lot like everyone else’s doughnuts: delicious for two bites, and then you start to hate yourself.

But if you go to Voodoo once, you want to talk about it. It makes for a great story that their customers love to tell.

Voodoo founders Kenneth “Cat Daddy” Pogson and Tres Shannon have a snarky, grungy ethos that attracts customers who think like they do.

When they try something new, they can consistently make the right call for their customers, because there is an unmistakable Voodoo “vibe.” Opening a store next to a historic adult movie theater? Thumbs up. Opening one next to a Restoration Hardware? Not even close.

This doesn’t just work for Denver and Portland hipsters. When you truly get your audience, you’ll be able to craft offerings that delight them, whether they’re monied Manhattan mavens or pious Peoria parents.

3. Don’t worry about the ones who aren’t your customer

If you’re still fretting over unsubscribes or nervous because a commenter was offended by the word “mofo” in your bio, let Voodoo be your inspiration.

Part of being memorable is knowing who you don’t serve.

It’s not (necessarily) about being as offensive as your imagination can inspire. It’s about writing off the people who aren’t right for you and never will be.

If you’re in an overcrowded market and are having trouble standing out, think about what you can offer that would be genuinely memorable, yes. Maybe there are some untried intersections in your topic — some fresh ways you can remix the tried and true.

But also remember: the answer to that question may lie in who you chase away.

Have you ever tried an edgy, bold, or even potentially (to some) offensive marketing position? How did it work out? Let us know in the comments …

Previous article: The Critical Thing You Need to Earn Targeted Traffic – Today, and into the Future
Next article: 6 Tactics That Turn a Blog Into a Business Engine