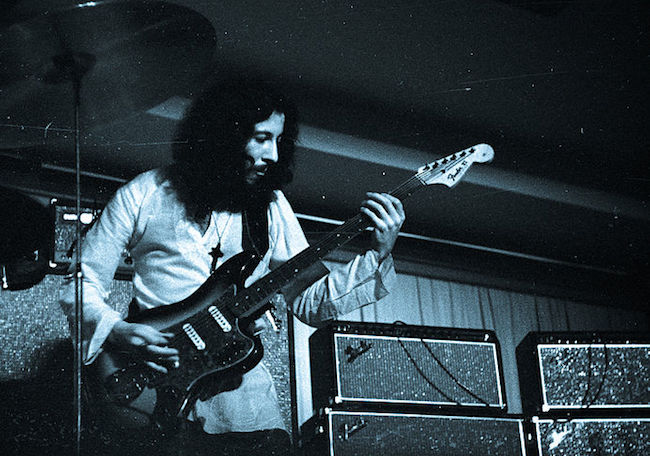 He’s leading one of the most popular bands of the late 60s. He’s touring the world, playing large concerts, making acclaimed records, dropping acid. He and his bandmates are living the life most musicians only dream of.

But not this kid.

He’s Peter Green. Anxious and unsettled. He’s got a vision for something substantial. Something different. Something that is “worth a damn.”

That something would ultimately be one of the greatest albums ever created.

It was because of Green’s intensity that B.B. King said Green was the only guitarist who gave him cold sweats when he played. And it was because of that intensity drummer Mick Fleetwood said, “We were all about following our friend and our musical mentor into the fire.”

We’ll get back to Peter Green and his legendary record in a minute.

But first, there’s this guy from Gawker.

He’s an editor. A mix between machine and magician because the headlines and articles he writes often get more page views in a month (30 million) than the rest of the writing staff of Gawker combined.

Month in, month out.

His secret? True, it starts with viral headlines — headlines that convince even the hardest of hearts to click. But it’s the stories he shares that are the key. He “understands the emotions that might compel someone to click on an item” and then share it.

This is the trick behind Upworthy, too.

Last summer Fast Company called it the “fastest-growing media site of all time.” It generated 8.7 million views in its first month. Monthly page views are now near 100 million, unbelievable for a site less than two years old.

Upworthy has taken a page from the playbooks of Buzzfeed and Gawker and upped the game. The site has nailed the science of curiosity-inducing headlines, though they say that is not their secret sauce. The content they share must pass these three tests:

At Upworthy paid curators comb the web looking for that super-sharable piece. Then they write 25 headlines, test them vigorously, and roll the post out.

It’s a successful formula for page views, but that’s not the only trick in the viral magician’s bag.

Some would call 2013 the year of the internet hoax.

Hoaxes were big, with the biggest being Elan Gale’s “argument” on Thanksgiving Day with cranky airplane passenger “Diane.” That crude, misoginystic exchange garnered 1.5 million page views and blew up his Twitter account.

Talk about putting your name on the map.

The sheer shock and audacity of that exchange kept us glued to his feed and to this article. (No doubt this was a superb example of internal cliffhangers.) We couldn’t keep our eyes away from that wreckage, even if we were completely disgusted and even if, in our hearts, we knew this couldn’t possibly be true.

What is wrong with us?

Nothing. We just love stories, whether they are true or not. We want to be entertained. Enthralled. We want to escape, which is why we float on the stream that is the Internet for most of the day.

But some argue that the stream has crested, and that change is in the air.

As content marketers this excitement and attention makes us pay attention. We are asking ourselves: “What can I learn from Gawker? Buzzfeed? Upworthy? Even from an epic fake note-passing war on a delayed flight?”

Do we do the outrageous to get attention? Do we dish out eye candy to lure the eyeballs home?

Ezra Klein at the Wonkblog, commenting on Gawker’s viral genius, thinks we need to be thoughtful about our reaction to these examples. He shares four lessons traditional content marketers should learn from the popularity of being viral:

Number three should stand out to you like a Buddhist monk armed with an AK-47. Let’s explore it.

The problem with high page views

People live for the immediate, the now. But here’s the deal: people also want substance. They want solid solutions to their problems.

High traffic is like a drug. You want more of it. And so you must push the edges. You must constantly innovate, which is risky and unsustainable.

Our Director of Content, Jerod Morris, knows high levels of traffic all too well.

His site Midwest Sports Fans jumped in traffic and notoriety after Jerod wrote a controversial article that ultimately landed him on ESPN. The only problem is he couldn’t flip that traffic into significant sustained revenue. Display advertising is a hard way to make a living (a point Ezra Klein also made on the Wonkblog).

Just ask Gawker. They’ve switched their business model to a proven one: affiliate marketing. Not unlike Maria Popova and her website Brain Pickings.

So where does that leave you? Somewhere between The New Yorker and Gawker.

Back to Peter Green

Peter Green was losing his mind.

Loads of LSD probably had a lot to do with it, but drugs only elevated what he already felt: uncomfortable with stardom. At least the superficial part of it.

Yet, this can’t be missed: The album that followed Green’s anxiety was Then Played On, about which Rolling Stone senior writer David Fricke said, “I think it’s one of the most beautiful records and exciting records ever made.”

When it comes to your business, you need the intensity of a Peter Green. This is no different than Sonia’s G.A.S concept, Google’s emphasis on cornerstone content, and Beth Hayden’s argument that content marketing is a long game.

We don’t need to go overboard like Green (he never recovered), but we need to give the world something more than just the quick and dirty.

So create something worth a damn.

Provide real value to the segment of society that wants it right now. That needs it right now. These are the people who are looking to learn how to play chess, strengthen their core, climb out of debt, complete college, and find love that will last.

There is no shortage of needs and wants you can satisfy. We all long for something.

This is your next move

That doesn’t mean you abandon viral content. Better yet, you can mix the viral with the substantial. For example:

See, when it comes to finding solutions to our problems we want something that is meaningful and practical. There’s nothing wrong with the occasional quick fix, but the bulk of your content should have long-term value.

This is nothing new to Copyblogger.

Our advice? Green himself summed it up in the first line of “Closing My Eyes,” the second track on Then Play On: “Now it’s the same as before.”

We’ve been preaching quality over quantity for years, and we have lots of resources to help you create substantial content.

Or you could grab this free series of seven ebooks on content marketing: How to Build the Audience That Builds Your Business.

They will give you a jump start on the only content marketing strategy that works: building something that is worth a damn.

The image atop the post shows Peter Green in March of 1970, roughly six months after the release of Then Play On. He would leave Fleetwood Mac in May. Credit: Wikimedia Commons