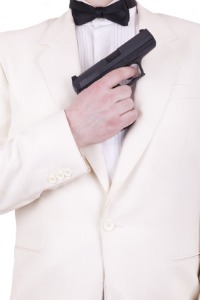 So there he was, bleeding arms tied to an unnecessarily slow dipping device, hovering over a pool full of hungry sharks, his beautiful companion’s fate bound up with his.

Everything depends on his next move. What does James Bond, perhaps the most iconic action hero of all time, do?

He cuts himself loose with his Rolex Submariner, which just happens to be equipped with a miniature buzz saw.

Sounds pretty cheesy when you put it like that, doesn’t it?

But it isn’t cheesy when you’re watching the movie … in fact, it’s amazingly satisfying. What makes this patently ridiculous plot point work? Why doesn’t it seem dumb when we watch it on the big screen?

Because the movie sets up the use of the watch early in the story.

Setting up fantastic gadgets and intriguing devices is a cornerstone of the spy genre, and the James Bond franchise in particular.

When the buzz-saw watch is issued to James Bond by Q, it seems a bit fantastic, but still congruent with the world Bond inhabits: a world of super-villains, gorgeous female spies, deceptive appearances, and cool gadgets, cars, and weapons. So we have no problem accepting the existence of the watch.

And with that set-up accomplished, the amazing escape via buzz-saw watch goes from lame to fantastic. In fact, the audience feels a sense of genuine pleasure to see how the gadget reappears at the crucial moment the story.

If James Bond was issued a cool gadget and never used it, we’d feel cheated. As Anton Chekhov famously said, “If you say in the first chapter that there is a rifle hanging on the wall, in the second or third chapter it must absolutely go off.”

Screenwriters for blockbuster movies use set-ups like this for two reasons:

How to use open loops in your copy: An example

To see how an open loop can create credibility, entice curiosity, and stimulate the need to know more, take a look at this example.

This radio ad was written for a diamond seller named Woody Justice by the Wizard of Ads himself, Roy H. Williams:

Antwerp, Belgium, is no longer the diamond capital of the world.

Thirty-four hours on an airplane. One way. Thirty. Four. Hours. That’s how long it took me to get to where eighty percent of the worlds diamonds are now being cut. After 34 hours I looked bad. I smelled bad. I wanted to go to sleep. But then I saw the diamonds.

Unbelievable. They told me I was the first retailer from North America ever to be in that office. Only the biggest wholesalers are allowed through those doors. Fortunately, I had one of ’em with me, a lifelong friend who was doing me a favor.

Now pay attention, because what I’m about to say is really important: As of this moment, Justice Jewelers has the lowest diamond prices in America, and I’m including all the online diamond sellers in that statement.

I’m Woody Justice, and I’m working really, really hard to be your jeweler. Thirty-four hours of hard travel, one way. I think you’ll be glad I did it.

The ad starts off by setting up an open loop: if Antwerp is no longer the diamond cutting capital of the world, which city is the new one?

But we’re not told which city; we’re only strung along with the hint that it takes a 34-hour plane trip to get there. Must be an exotic place, right? The listener’s curiosity starts to itch. He wants to know where this mysterious place might be.

Then we’re told that to be allowed into this inner sanctum of diamond buyers –- a place out of reach to every other retailer in America — is to have access to prices lower than the competition can match. How much lower remains an open question, and so another loop is opened in the mind of the listener.

Finally, the ad closes by circling back to the 34-hour trip without ever closing (i.e., “paying off”) either the “how much lower” or the “which city was it” loops.

Now the itch to find out “where’d you fly to, Woody?” or to see just how great the prices are — well, those are the obvious parts of the ad, the ones everyone recognizes on a first listen.

But the added credibility achieved through set-up and payoff is really where this ad shines.

If Woody had just come out and claimed lower prices through access to some un-named, super-exclusive source of cut diamonds, we’d give him the old “Yeah, sure.”

But we’re not told that straight out, are we? No. Because that claim has to be set up.

So we’re told how difficult it is to get to this new diamond cutting capital of the world (it takes a 34-hour plane trip). And how many diamonds are cut there. And who normally does make that long, arduous trip (only the biggest diamond wholesalers).

Only after we’ve mentally put ourselves into that room –- after we’ve had the moment set up for us –- do we then get the claim of lower prices.

And at that point, we listeners may not quite swallow the claim whole, but we’re intrigued enough to put it to the test. We have enough faith to at least investigate Woody’s claim by coming into the store, if only to ask him where that 34-hour flight took him.

By now, you might be thinking that headlines are actually a form of open loop copywriting. Many headlines hook the reader by starting an intriguing thought — and implicitly promising to close the loop in the article or post itself.

This Copyblogger post, What a Drunk Swiss Guy Can Teach You About Handling Criticism, is a perfect example of that technique. It starts with a surprising headline and sets up an interesting story, then uses the payoff for that story to make a point.

And a more serious article used a headline as an open loop to lead into a striking story about one of our writers: Why James Chartrand Wears Women’s Underpants.

Articles and posts use this technique when they open with a dramatic scene or image, backtrack or diverge to another point, and finally circle around at the end to close the loop.

When you open a loop, when you set up an intriguing situation and leave the reader wanting to know more, you create momentum that carries the reader through the page. But as you might imagine, you can’t just open loops — you need to close them (to provide a payoff) as well.

Skilfully created set-ups and payoffs can create emotional power through narrative misdirection and symbols — giving you some of the satisfaction you get from watching a well-plotted action movie.

How, specifically, do you build that emotional power? Well actually, you’ll have to wait for part two to find out. Read the sequel to this post next week for more.

Previous article: Is There Life After Freelancing?
Next article: New WordPress Theme: Pretty Young Thing is Ready for Her Close Up