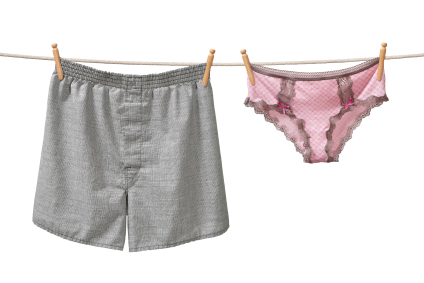 You know me as James Chartrand of Men with Pens, a regular Copyblogger contributor for just shy of two years.

This is not a joke or an angle or an analogy — I’m literally a woman.

This is my story.

Once upon a time, I found myself having to make some hard decisions.

The welfare application was on my kitchen table. It was filled out and signed, waiting for me to bring it to the people who would decide whether I’d be able to make rent next month or put food on the table.

I hated looking at it. I didn’t want to be in this situation. I’d thought that when you start over, make a clean break, life was supposed to get better, right?

But here I was, out of money and out of choices.

I had two young daughters to take care of. I was single and alone, having left an unhealthy relationship, and I was living in a crappy, tiny apartment.

I’d used up my savings trying to make ends meet, supplementing as best I could with the money I earned from a dangerous part-time job that gave me all of 4 hours pay a week at minimum wage. I had been looking for a better job, but there were none to be had in the low-income/high-unemployment area where I lived.

And I couldn’t get a full-time job anyway — I was still on the waiting list for a spot in daycare.

How did I get here?

It was ironic. I’d once had a respectable, safe job in a corporate office. I’d had the nice salary, the paid vacations, the opportunity for advancement. I had formal education, diplomas, brains, and skills, and life had been good.

My older daughter told me she could look for work to help pay the bills.

As a last-ditch resort, I turned to the internet. There must be something I could do. There must be jobs out there . . . maybe in writing. I was a good writer.

And sure enough, there was writing work for me on the ‘net, work I could do from home that paid quickly. I signed up with the company, thinking I was so lucky to have this chance to pull myself out of the mess.

I struggled to get gigs — there was tough competition from more experienced hustlers. When I did manage to grab a job before someone else could, I worked hard and wrote well. I wanted to do my best.

I quickly learned that this sucked.

So I started looking for better gigs and clients, now that I knew there was writing work to be had.

I scoured Craigslist and job sites and gig auctions and sent applications to all sorts of people.

And it worked. I started getting real clients, for real pay. I was earning more, feeling good. I even began hiring people to work with me as a team.

But . . . it still wasn’t really working

I had high-quality skills and a good education. I was fast on turnaround and very professional. I hustled and I delivered on my promises, every single time. I worked hard and built the business, putting in long hours and reinvesting a lot of the money I made.

I really, really wanted to make this work.

But I was still having a hard time landing jobs. I was being turned down for gigs I should’ve gotten, for reasons I couldn’t put a finger on.

My pay rate had hit a plateau, too. I knew I should be earning more. Others were, and I soaked up everything they could teach me, but still, there was something strange about it . . .

It wasn’t my skills, it wasn’t my work. So what were those others doing that I wasn’t?

One day, I tossed out a pen name, because I didn’t want to be associated with my current business, the one that was still struggling to grow. I picked a name that sounded to me like it might convey a good business image. Like it might command respect.

My life changed that day

Instantly, jobs became easier to get.

There was no haggling. There were compliments, there was respect. Clients hired me quickly, and when they received their work, they liked it just as quickly. There were fewer requests for revisions — often none at all.

Customer satisfaction shot through the roof. So did my pay rate.

And I was thankful. I finally stopped worrying about how I would feed my girls. We were warm. Well-fed. Safe. No one at school would ever tease my kids about being poor.

I was still bringing in work with the other business, the one I ran under my real name. I was still marketing it. I was still applying for jobs — sometimes for the same jobs that I applied for using my pen name.

I landed clients and got work under both names. But it was much easier to do when I used my pen name.

Understand, I hadn’t advertised more effectively or used social media — I hadn’t figured that part out yet. I was applying in the same places. I was using the same methods. Even the work was the same.

In fact, everything was the same.

Except for the name.

The answer was plain. Without really thinking much about it, I tried an experiment when I chose my new pseudonym:

I became a man (in name only)

Taking a man’s name opened up a new world. It helped me earn double and triple the income of my true name, with the same work and service.

No hassles. Higher acceptance. And gratifying respect for my talents and round-the-clock work ethic.

Business opportunities fell into my lap. People asked for my advice, and they thanked me for it, too.

Did I quit promoting my own name? Hell yeah.

Eventually, I had earned enough income and credibility to get a mortgage, and I bought a tiny, modest house for me and my kids in a quiet town near my mum. It was the first home of my life I could truly call my own, paid for by long hours and hard work. Paid for by my own sweat and tears, at the tender age of 37.

Using a male pseudonym when you’re a woman isn’t anything new. Writers have been doing it for centuries. George Eliot, George Sand, Isak Dinesen. Even the Brontë sisters, championed today, wrote as Currer, Ellis, and Acton Bell back in their time.

Why did they do it? To have their work accepted, because women weren’t supposed to be writers. Their work had a much better chance if their audience didn’t have to get over initial skepticism that a woman could write at all, much less do it well.

Since then, we’ve had feminism. We have the right to vote, to own property, to be members of Parliament and Congress, to get a job, and to be the main breadwinner of the family. And yet apparently we haven’t gotten past those 19th century stigmas.

The evidence was right there in front of me.

I never wanted to be an activist, or to fight the world. I’m not interested in clawing my way up a ladder to a glass ceiling. Life’s too short for that.

I just want to earn a living and be respected for my skills. I want my kids to be happy and have access to what they need. I want them to go to university and have good opportunities in life.

When it started to take off

I really didn’t think any of this would ever happen, to be honest.

The blog I’d started to get some clients and show off my skills? For a long time, so few people read it that weeks would go by without a single comment.

But things changed. Slowly at first, but then all of a sudden they picked up speed. There were more comments on the blog, and more again.

I didn’t overthink it — I just answered them and kept on blogging to earn clients.

Then my blog hit Michael Stelzner’s list of the Top Ten Blogs for Writers. The flood of people who came to visit was overwhelming.

And they liked what I wrote.

What I did next

I was in too deep to back down, too survival-minded to do anything but go forward, and, quite honestly, too scared I’d lose everything I’d worked so hard to build.

So I didn’t do anything at all. I didn’t really know what to do.

I thought about it a lot, though. And logic told me that the loss of my real name was a small concession for the ability to be able to support my family and ensure their financial security for years to come.

Truth be told, if just a name and perception of gender creates such different levels of respect and income for a person, it says a lot more about the world than it does about me.

Why am I telling my story now?

For three years, I’ve kept my true name and gender pretty tightly under wraps and only confided in a tiny handful of people I trusted. But there was always that risk that someone, someday, would end up spilling the beans. And for years I sat braced for that moment.

And sure enough, someone I trusted got mad and decided to out me. (Someone who, incidentally, was using a male pseudonym and identity too. Go figure.)

My life, my terms. No one handed me anything. I’ve worked damned hard for this. I took care of myself and my family, and I’ve given the best of my creativity and knowledge to each of my clients and my readers.

Oh, my real name? Well, I never really wanted that revealed, totally apart from the gender issue. I know better than most how quickly and profoundly revealing just a tiny bit of personal information can affect (and even destroy) people’s lives.

I have kids. I’m not interested in making myself vulnerable in that way.

So please. Just call me James.

(Author’s note: I have to extend my thanks to Kelly for the help she gave me with the original draft of this post. Her kindness made a difficult task so much easier.)

Previous article: How to Do Less and Get More
Next article: Landing Page Makeover Clinic #21: The-100-Best.com