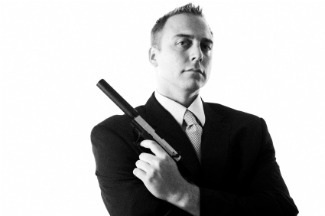 Imagine you’re having a discussion with a talkative, hyperactive teenager.

We went to the mall, and like, there was this fire in the mall. And we went from there to the movies, but we didn’t have any money and anyway the popcorn machine was broken, and so we didn’t really want to go to the movies without popcorn. But right after that we went to have some pizza and there was this creepy guy outside the store. But listen to this — because that’s not the best part. The best part is that Sylvie dumped Josh, and like, they ran into each other in the street …

Annoying right? Then why do we so often write our web copy just like that teenager talks?

Is there a better way to write a landing page?

We tend to move all over the place with our copy.

Then we’ll try and fill in too many sub-heads that we want to drive home.

And then our first paragraph attempts to cover all the possible points.

And — like that teenager above — we have the entire story in our heads, but nothing quite gets across to the client.

We’re trying to cover way too many points, way too quickly.

And, as you’ve worked out for yourself, this bouncing and jumping around is exhausting for your reader.

How this mistake unfolds in an actual piece of copy

Let’s take a look at our “teenage talk” problem using a real-life example:

Are You Fed Up With Unprofessional Contractors?

So what’s wrong with that sequence?

It gets off to a good start. The headline gets my attention without too much of a fuss, particularly if I’m having this problem right now.

But then I start reading and I get between three and five main plots and no sub-plots at all.

How do we know they’re main plots? Because we can list them out and see for ourselves. They all want to take center stage.

Just like that teenager’s story, it’s possible for us to jump from one to the other, without so much as pausing for a single breath.

So now that we know we’re creating bounce, how do we get rid of it? And how do we still use all the persuasive points we want to cover on our landing page?

How to say exactly what you’re trying to say

Just like an exciting movie or a bestselling novel, your article needs a single main plot. One primary storyline that the reader or viewer is most interested in.

You can also have sub-plots — additional points that make the story more complex and interesting, and continue to hook that reader.

So how do you know which point is your main plot? It’s the client’s most pressing problem.

That’s obvious, isn’t it? You want to get the client’s attention by driving home the biggest, scariest, buggiest problem.

Here’s how we go about it:

Write your headline. It should only cover one big, buggy, nasty problem

Move to the next point.

So how does the teenager’s story look in this format?

We went to the mall and there was a fire.

With the teenager, she’d complete one story, and move to the next.

But you may have made your point with a single story.

So what do you do with the rest of the stuff that you so badly want to get across? You bring it up later.

Let’s see how. But first let’s get back to squaring this in our original example.

Are You Fed Up With Unprofessional Contractors …

And then you present your service:

Notice we haven’t gone to Point 2 yet. And yes, I know, you’re itching to drive home that point.

But first, do you notice something?

The customer doesn’t care about your itch. They’re locked in to what you’re saying.

You’re the first person they’ve met who isn’t like that teenager, jumping from story to story.

The customer’s biggest problem is ‘unprofessional contractors that don’t call back or show up’ and you’re talking about exactly that. The customer wants to know more about that story in detail, before they’re ready to move to the next story.

So after you present your company and how it brings that one solution to their problem, you can move on to the next “subplot,” the secondary stories in your copywriting plot.

Roll out the remaining subplots in slightly less detail, in a feature/benefit format that looks like this:

You can have as many as 8-10 paragraphs rich with details of the problem and the solutions you bring to the customer.

Having locked into the main problem and seeing how you bring that solution, the customer will happily trundle through the rest of the points, and become more convinced by the word about your ability to solve their problem.

In short, you must have a main plot, then drive it home

Later, pull in the sub-plots, but without the same level of intensity as the main.

Just remember to pick the point your customer cares most about as your main plot. ‘Sylvie dumping Josh’ has more drama than ‘no popcorn at the cinema.’

From there, you’re simply re-telling your story on the landing page.

One plot at a time 😉

Previous article: Words that Matter, Business as Gardening, and More: The Copyblogger Weekly Wrap
Next article: How to Master the One Trait That Makes You Unstoppable