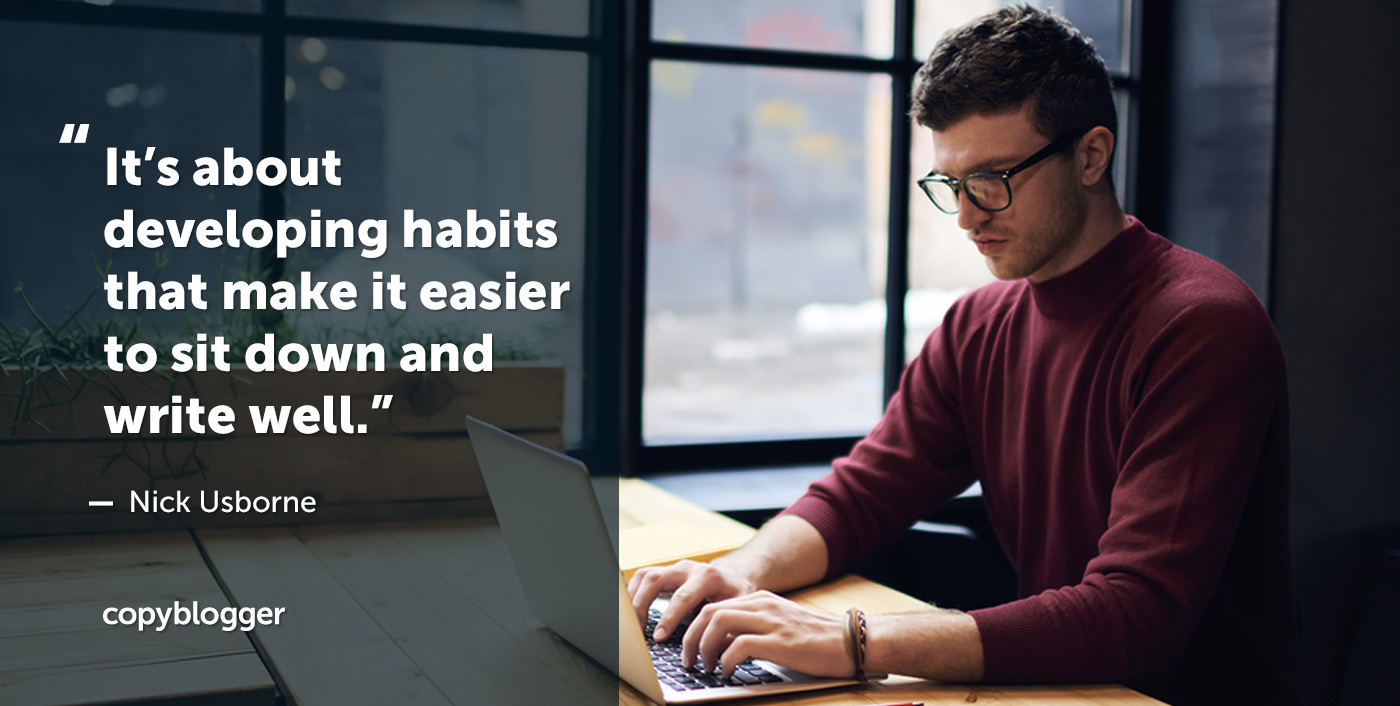 It’s about developing habits that make it easier to sit down and write well.

It’s about finding simple ways to make your writing a whole lot better … whether you’re writing a sales page, an email, a blog post, or a social media update.

Tip #1: Write the first draft of every headline as a placeholder

They obsess over every word, believing they can’t move forward with the body text until the headline is perfect.

But … the deadline is approaching … and their headline still isn’t done.

I take the opposite approach. I throw down a first draft of a headline and then dive into the body text.

I don’t care how crappy the headline is, so long as it’s pointing more or less in the right direction.

I know I’ll go back to improve it later.

But by writing a placeholder, I’m removing all that pressure. I’m allowing myself to jump in and write the body text. I’m giving myself permission to move forward.

And the process of writing the body text will almost always kick up a few ideas for a better headline.

As soon as something better comes to mind, I replace the old headline with the new one.

But again … no pressure for it to be the best possible headline. Because as I continue writing the body text, I’m still open to coming up with an even better version.

Take the pressure off. Relieve yourself of the tyranny of having to write the perfect headline right out of the gate.

Tip #2: Begin your body text with a short sentence, as part of a short paragraph

If you take a look at the first few sentences and paragraphs of this post, you’ll see they’re short.

I’m designing the first part of the page with words and space.

I’m making it look easy to start reading the post.

When you begin with a long paragraph with long sentences and — heaven forbid — long words, you remind your readers of textbooks.

This is particularly true when your page is read on a smartphone. Even short paragraphs can look long.

Another benefit of starting with short, simple sentences is that it forces you, the writer, to be clear about what you’re trying to say.

Muddled thinking leads to endless rambling. Achieve clarity in your mind before you start writing, and your text can be shorter and to the point.

Tip #3: If you find yourself wanting to use a semicolon or colon, it’s time to rewrite

I confess. I’m not good with grammar.

Truth be told, I don’t even know the rules when it comes to punctuation like semicolons and colons. No idea!

And I’m OK with that, because my job isn’t to follow the rules of grammar. My job is to communicate clearly through the written word.

I’m even OK with starting a new paragraph with “And.”

My high school English teacher wouldn’t be amused. But I like to think he’d appreciate the level of clarity I’m aiming for. (Oops, ended that sentence with a “stranded preposition.”)

It took me forever to figure this one out.

I’d be proofing a draft of some copy I’d written. And while I was reading through the text, on the lookout for typos, I’d sometimes hear a very quiet voice in the back of my head.

I ignored that voice for years. Which was a mistake.

While proofing the text, I’d read a sentence or two that had a problem. The quiet voice would say, “Hey, you should rewrite this.” But the bigger voice at the front of my head would say, “Nah, it’s fine as it is.”

And the bigger voice would win.

Which was a pity, because in my experience, the quiet voice is always right.

In part, this is a vanity thing. It often happens over a passage I really like. I don’t want to hear it being criticized. This is related to that age-old advice to “kill your darlings.”

We don’t want to admit that our wonderful sentence of copywriting is less than perfect. But when that quiet voice whispers at you …

Tip #5: Working on your final draft should be about ferocious cutting

Ask anyone who has met me at a conference and they’ll tell you I talk too much.

I write too much as well. I go on for too long, and waffle. And I tend to repeat myself. A lot.

And when I’m writing my first draft of pretty much anything, I’ll often use three words where one would do the job just as well.

These are small changes. But if I make a dozen or more edits to the page, with a view to cutting out the fat, it can make a big difference.

The process of becoming a better writer

We often focus on the tips, tricks, techniques, and secrets of being good copywriters or content writers.

We want to master the craft of persuasive writing.

We want to write in ways that maximize engagement and conversion rates.

Nothing wrong with that.

But it also makes sense to pay attention to a simpler level of our craft.

Try to be a better writer.

Previous article: 3 Types of Action that Stir Up the Desire to Keep Reading Your Article
Next article: A 10-Minute ‘Hack’ that Makes You a More Confident and Effective Writer