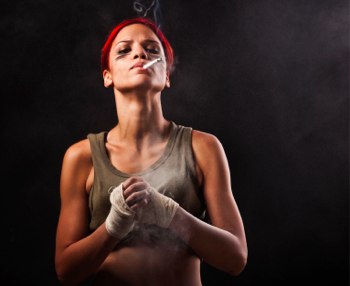 So by now you know that real links (the kind you earn, not the kind you pay for) and social sharing are key components of natural SEO.

And by “natural” I mean “the kind that still works.”

So you’re busting your tail to:

That’s often enough to get some momentum going. But if you aren’t seeing it yet, there might be a critical piece of your message that’s still missing.

Now this strategy can be wildly misused. And if you get it wrong, you’ll do more harm than good.

But when you get it right, you fill one of the last pieces of the organic SEO puzzle — and just like every element of good SEO, it works for your audience and customers even better than it works for search engines.

You have to stand for something

A few months ago, my kettlebell trainer shared a fascinating post from a blogger named Amber Rogers, whose blog is called “Go Kaleo.”

The post pulled me in with an engrossing story. It was about a subject I’m very interested in — fitness and nutrition.

A point of view that challenged the status quo — but thoughtfully. (And supported by evidence, which is always refreshing.)

The more I found out about Kaleo, the better I liked the content. I “Liked” the Go Kaleo page on Facebook and started commenting and sharing.

I notice that some of my own friends on Facebook are now following Go Kaleo … and sharing her work with their networks.

Taking a stand attracts attention. But you need more than attention.

You can’t just be a contrarian jackass

I think we’ve all read content from acid-tongued critics who don’t seem to have ever actually built anything.

People who are addicted to phrases like “punch in the face” and “go die in a fire.” They’re often clever and very funny. They have no trouble gathering links or shares … but it’s not in service of anything.

They pull our interest in … sometimes in a pretty sick way.

Attention is not the same thing as authority.

When you claim authority (not bogus “guru” authority, but real leadership), you’re constructing something. If you aren’t solving a problem for your audience, go back to the drawing board until you can.

Not everyone who builds is a nice guy. Steve Jobs wasn’t a particularly nice guy. But he was no troll, either. He built a hell of a company … one that added to people’s lives, instead of sucking energy into an endless attention black hole.

Find your tribe, or create a new one

Here’s Amber Rogers’ self-description from her blog. Notice that it doesn’t define her so much as it identifies who she serves.

… trouble-making cheerleader of the boot-strappers, the over-comers, the kool-aid rejectors, the post baby body-reclaimers, the eaters and movers, the strong and powerful, and most of all, the critical thinkers.

Figuring out your big idea — your positioning — is about what you stand for, but it’s also about who you aren’t.

Go Kaleo isn’t shy about making enemies. Rogers talks about the traditional dietary industry as “predatory.” She talks about the “bro science” that informs a lot of popular fitness sites.

She’s a warrior, and she seems to thoroughly enjoy duking it out on behalf of her tribe.

She is fearless, and I think that lack of fear comes from knowing that her content is in service to her audience. She offers constructive, positive advice as a counterweight. And she encourages her audience, always, to think for themselves.

When you know what you stand for, you’ll know how to frame everything you create. You may not be quite as confrontational as Go Kaleo, but you won’t be afraid to speak up, either.

But far beyond the SEO benefits, you’ll be serving your audience. And that’s always the best foundation to build on.

This is part six of the Content Connections series

You can read the first five posts here:

Previous article: A Comprehensive Guide to Formatting Your WordPress Posts and Pages
Next article: How to Build an Email List that Builds Your Business [Free Webinar]