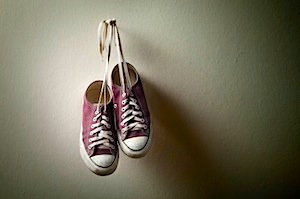 Yesterday, I went out to buy some walking shoes. I ended up spending $2000. And that’s not counting the shoes …

There’s a good chance those opening sentences got your attention. They sucked you in. And the reason you hear that strange sucking sound is because I didn’t start off the article like most people do.

Most people slide logically into an article.

But, most writers neglect the power of a story to captivate their audience immediately. And they neglect not just the story, but the middle of the story. Because there, smack bang in the middle, lies the real drama — the part that truly captivates your reader.

Let’s take a closer look at how this works.

How do you know what part of the story to use?

The answer is actually quite mundane — even, counterintuitive.

To get at the drama, you don’t have to pick anything in the story that is particularly exciting. You just have to make it exciting for me, the reader.

Were the purchase of the shoes the most important point of my little story? Or was it the purchase of a draughtsman’s table? Perhaps it could be Italian food we had for dinner. Or just about anything.

In any good story, there are at least three or four exciting points of interest, and any one of them can rise to the surface.

Yes, any point is exciting. What really matters, is how you bring a factor of excitement to the story. As you explain the details, the simple fact becomes interesting.

Master storytellers know this to be true. They know that even a mundane story can be brought to life in the way you recount it.

In a presentation at TED.com, speaker, Hans Rosling tells a seemingly mundane story of a washing machine.

Now, Hans has many options at the tip of his tongue of how to tell this story, but he chooses to talk about the “button-driven miracle” of the machine. And he stays with that angle to get your attention.

How even a mundane story can be captivating

Read how Hans tells it …

I was only four years old when I saw my mother load a washing machine for the very first time in her life. That was a great day for my mother. My mother and father had been saving money for years to be able to buy that machine. And the first day it was going to be used, even Grandma was invited to see the machine. And Grandma was even more excited. Throughout her life she had been heating water with firewood, and she had hand washed laundry for seven children. And now she was going to watch electricity do that work.

My mother carefully opened the door, and she loaded the laundry into the machine, like this. And then, when she closed the door, Grandma said, “No, no, no, no. Let me, let me push the button.” And Grandma pushed the button, and she said, “Oh, fantastic. I want to see this. Give me a chair. Give me a chair. I want to see it.” And she sat down in front of the machine, and she watched the entire washing program. She was mesmerised. To my grandmother, the washing machine was a miracle.

What’s the interesting part in that story?

It could have been that the clothes came out extremely clean.

It could have been the sound and how they were captivated by the sound of the machine.

It could have been the changeover from hard labour to just a button-driven miracle.

Hans chose the button-driven miracle. But, as you can see, he could have chosen anything as long as he used emotions to drive the story home.

You can feel the excitement, the awe, as Hans tells this rather mundane tale. And it’s these set of emotions that keeps the drama going and the hearts of his audience pulsating.

A bizarre set of conclusions

One of the best ways to get the reader’s attention is to tell a story. But the best way to get that story raging ahead is to pick something — anything — from the middle of the story and using it to start your article.

And as you work your way through your story in the article, you’ll find at least two or three spots where you can harvest great emotion or unusual drama.

And when you’ve found that emotion and drama, it’s just a matter of placing it at the beginning to draw your reader in.

I’ve found it’s a way to begin articles that no reader can resist.

Previous article: 7 Marketing Articles Worth Reading
Next article: A Comprehensive Guide to Formatting Your WordPress Posts and Pages