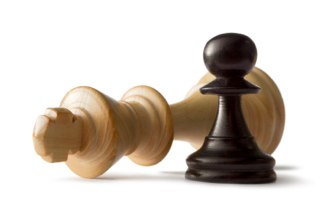 Because Copyblogger is a company that was born in this strange virtual place we call the worldwide web, partnerships and cooperation have always been central to what we do.

We work hard to keep engaging your interest and teaching you valuable things. And we rely on other web publishers to share what we create, so we can find new people to talk to.

We believe in cooperation … but we know perfectly well that business is also a competition. And sometimes, competitors don’t much want to play.

I’ll borrow a term from Robert Wright and call mutually beneficial cooperation a nonzero game. That’s in contrast to a zero-sum game — the kind of game (like chess, or football) where there is one and only one winner.

A lot of businesses operate in a nonzero environment.

But you might very well be playing a zero-sum game

I remember one of our Third Tribe members who was having a tough time finding guest posting opportunities.

She’s a beauty blogger — she writes about cosmetics, hairstyles, that kind of thing. And she didn’t feel too welcome when she approached her fellow beauty bloggers about sharing a guest post with them.

The other bloggers she was finding hadn’t gotten the news that working with your rivals can be the key to greater success for everyone.

If you sell insurance, if your prospect buys from someone else, he won’t buy from you. Real estate agents, car salesmen, and actors are in a zero-sum competition. One winner, multiple losers.

You win the business or you lose it.

And if those competitors are using content as part of their marketing strategy, getting links from them — either with guest posting or just writing killer content — probably ain’t gonna happen.

So as much as we like to promote “co-opetition,” is that even possible if you’re in a zero-sum business?

It is, and we’re going to talk about how.

The answer for our beauty blogger was pretty simple.

If there isn’t a single blogger in your topic who would be open to a guest post, the next step is to ask yourself,

Who else has the audience I want?

Do parenting bloggers ever run posts about hair or makeup? Would a career-building blog consider running something on how to look more professional and polished? Is it possible a fitness blog would have room for a post on how not to scare people with your appearance as you’re leaving the gym?

Yes, yes they would.

Jon Morrow likes to tell the story about how he hit a major home run by writing a guest post for Penelope Trunk’s Brazen Careerist blog that benefited the blog Jon was writing at that time, called On Moneymaking.

You would think that a blog called On Moneymaking would focus on blogs about … making money. And looking for content publishers in that topic would have been a smart strategy.

But Jon found even more return — a lot more, in fact — by landing posts on blogs speaking to the same audience, but not precisely the same topic. He scored serious traffic — not to mention some great SEO benefits — from blogs about careers, and personal productivity.

Jon didn’t feel hemmed in by finding guest posting opportunities on sites that covered the exact topic he did. Instead, he asked himself who else had his audience — then pitched and wrote some excellent guest posts to woo that audience.

If the door is closed, go through the window

The short answer to all of this is: Don’t agree to play by rules that don’t suit you. You define your own game — that’s why you started a business.

Figure out how to create a new niche that’s never been seen before. Serve an audience in a way that hasn’t been done yet. Make allies where no one expects you to.

If your outright competitors aren’t into sharing your content, go a little sideways until you find the people who will.

Figure out the win-wins. They’re there, but you have to look for them.

This is part three of the Content Connections series

You can read the first two posts here:

Previous article: How to Resist the Temptation to Lie and Cheat Your Way to the Top
Next article: How to Answer the Entrepreneurial Question: “Just Who the Hell Do You Think You Are?”