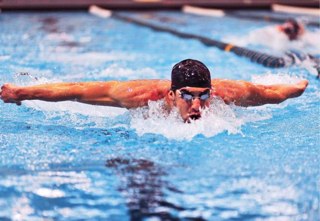 If you were an Olympic-caliber swimmer, you could be forgiven for sort of hating Michael Phelps.

On Tuesday, he broke the record for holding more Olympic medals than any other athlete in history — 19 medals, of which 15 are gold.

During this summer Olympics, he’s been battling it out in a widely-publicized rivalry with his U.S. teammate Ryan Lochte.

Even a casual observer gets the impression that Lochte is, well, kind of sick of hearing about how great Michael Phelps is.

Lochte has been quoted over and over again saying, “This is my time.” And he did beat Phelps in the 400-meter medley, snatching the gold while Phelps didn’t even make the podium.

But when it was time for Phelps to grab that record-smashing 19th medal, he needed his rival’s help to do it.

Phelps won that 19th medal in the 4 x 200-meter freestyle relay — which means he needed the help of three other teammates, all working together toward a common goal.

When asked how he was able to beat Yannick Agnel, the brilliant (and scary fast) French swimmer in the lane next to him, he was quick to credit the nearly four-second lead given to him by his teammates.

Competition is great. Competitors keep us honest, keep us on our toes, and keep us improving. Without competition, we’d probably get pretty bored.

But competitors can also, at times, make the best allies.

Who else has the audience you want?

Wise online marketing begins with cultivating an audience — bringing together the collection of people who are interested in your topic and might be converted to customers.

The first letter of pretty much every copywriting or selling formula is “A” — for attention (or Audience, in this case). If you can’t get a crowd listening to what you’ve got to say, nothing else is going to work.

The most brilliantly written marketing can’t work if there’s no one there to read it — or if it’s sent to an audience who’s not tuned in to the subject.

You could simply buy traffic to build your audience, with pay-per-click or other forms of advertising. It’s been done before, and it will be done again.

But it’s expensive, and getting more so every day. It’s also tricky — whole books can be written (and have been) about how to manage the intricacies of Google AdWords.

When it works — and it doesn’t always work — advertising is a traffic faucet that can be turned on and off. If someone else (like Google) owns the faucet, and you have no other resources in place to grow your audience of prospects, they can turn that faucet off as easily as you can. And that puts you in a very dangerous position.

Power to the people

So if you don’t use advertising (or only use it for a portion of your traffic), how do you find your audience?

You find it by identifying individuals who have the audience you want, then cultivating relationships with them to better serve their audience … and grow yours while you’re at it.

People with major followings know that the audience comes first. If you can benefit their readers, viewers, or listeners, you’ve got a good shot at making an alliance.

Even the most obnoxious online mavens and celebrities (and there are certainly a few of those) rely on allies to get the word out and keep it going.

Have you ever met anyone who owns one diet book?

Most people either own zero diet books (they don’t worry about their weight, or they don’t turn to books for advice on it) or they own a shelf full of them.

There aren’t many “lone wolves” out there any more. Partnership and cross-pollination are the name of the game.

If you’re building your business on an audience attracted by your authority about a particular topic (which is what we think you should be doing), you want to spend most of your time working with, not against, the “competitors” for that audience.

But isn’t this just manipulation?

While it’s true that I am extremely evil, I’m not a fan of sucking up to someone you hate just to make a business connection.

In the first place, it does a disservice to your audience. If you have a legitimate disagreement with a competitor (especially if it’s a matter of ethics, rather than just style or approach), that person isn’t a good potential ally.

In the second place, sucking up to people you can’t stand will leach the soul out of everything you do and leave you disgusted with yourself. Which isn’t why you’re in business.

Friendly competitors like Phelps and Lochte don’t make a secret of their rivalry. They’re each respectfully out-front about their deeply held desire to win.

Respect and mutual goals allow rivals like these to work together when the situation calls for it.

This post is the kick-off for a series on making connections with other online publishers. We’ll talk about:

As well as lots of other tips, techniques, and strategies for growing your “frenemies” list.

And if those frenemies turn out to be flat-out friends … so much the better.

To get the full series, just stay tuned here at Copyblogger. If you haven’t already, why not subscribe by email so you’ll be sure you don’t miss any of the series.

Have you ever worked cooperatively with a competitor toward a common goal?

Previous article: How Premise 2.1 is an Even Better Engine to Run Your Digital Business
Next article: How Amazon Grew My Audience By More Than 24,000 Readers in Three Days