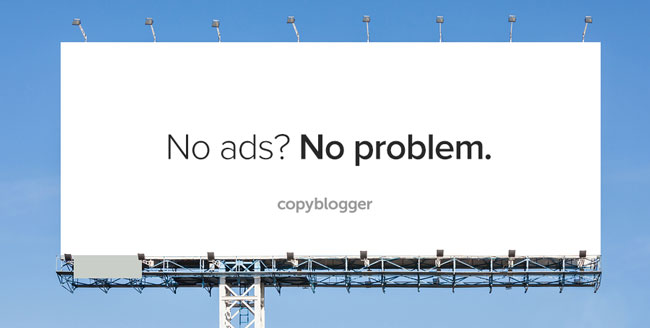 Let’s do a little thought experiment for a minute.

Imagine a life without The Awl, The Huffington Post, the New York Times, Drudge Report, The Onion, The Toast, The Verge, or Vox.

You get the idea; I want you to imagine a life without your favorite online publications. A digital content ghost town. Got it?

Now my question for you is this: would your life be better or worse without these publications?

It’s a question you have to answer since a future without these publications is quite possible. Let me explain.

Some are calling it a mere “reckoning,” while others like Nilay Patel at The Verge think, “It is going to be a bloodbath of independent media.”

The issue at hand? The rapid adoption of ad blocking software.

This parochial issue became a national — even international — one when Apple announced this summer that for their iOS 9 update “app developers will be able to create ad blocking software for Safari’s mobile browser.”

And, at the time I wrote this article, the number one downloaded app was for ad blocking.

But could ad blocking software really sink the publishing ship? Let’s look at some numbers.

According to an often-quoted Adobe and PageFair study, ad blocking software is estimated to cost publishers $22 billion in revenue during 2015.

But the startling stats don’t end there:

In other words, it’s only going to get worse.

I guess if I was a publisher and my revenue model was dependent upon ads, those numbers might keep me up at night and keep me near a bottle of Wild Turkey and Tums by day.

Particularly since the mobile market trend is on a ferocious upward swing. On MondayNote, Frédéric Filloux wrote:

The second trend is the rise of mobile surfing that accounts for half of pageviews in mature markets. And, in emerging countries, users leapfrog desktops and access the web en masse through mobile.

And I think it’s safe to say this growing group of mobile users will use ad blockers.

The problem with online ads

But why such a backlash against ads? Ads really aren’t that bad, are they? And isn’t there an implicit contract between publishers and readers that says you can view free content if you tolerate these ads?

That seems to be the case. On the New York Times, Farhad Manjoo writes, “Some publishers and advertisers say ad blocking violates the implicit contract that girds the Internet — the idea that in return for free content, we all tolerate a constant barrage of ads.”

But it’s not really that simple because ads disrupt the user experience.

Here’s something you must understand about the current nature of online ads: They are obtrusive, drain your device’s battery when transferring data, and significantly slow down page loads.

Let me show you what I see when using an ad blocking tool called Ghostery.

This is from programmer and writer Marco Arment:

As you can see, there is just one piece of ad software sitting on the site.

This is from The Awl:

There are 29 different types of ad software working behind the scenes on The Awl.

Forty-three different ones here — and the page continued to load after I snapped that shot.

This shouldn’t surprise us, Jean-Louis Gassée says on MondayNote:

You can’t blame the browser, it’s the way the system has evolved in the Web advertising race to the bottom. Back when physical newspapers were still vital, advertising space was limited and thus prices were well-behaved and constant. No such thing on the Web, where the ‘ad inventory’ tends to infinity. As a result, prices fall, sites need more ads to stay afloat, and they must consent to exploitative practices.

Here’s the funny thing: the current online ad model is based upon interruption. In fact, we’ve come full circle.

Instead of commercials interrupting our favorite television shows and telemarketers calling us during dinner time, videos expand and automatically start playing without warning and products we viewed just minutes ago are stalking us everywhere.

It’s like the advertising industry needs another lesson in permission marketing. Haven’t we learned anything? Clearly not.

Now, some publishers have fought back by refusing to allow people who are using ad blockers to see their content. It’s been reported that The Washington Post has been directing users to either disable ad blockers or sign up for a subscription newsletter to access their content.

Others like The Atlantic and NFL display a banner that says some variation of: “We noticed that you’ve got ad blockers enabled. Please be aware that our site is best experienced with ad blockers turned off.”

As if turning on ad blocking software was a mistake. No. It was intentional.

We don’t need better ads — we need a better model

What’s interesting in this discussion is how people are suggesting that this will be good for publishers and advertisers because they’ll have to come up with better ads — ads that don’t interrupt our experiences and bloat our machines.

The sad thing about this is the small, limited thinking behind it.

You see it when Nilay Patel says, “But taking money and attention away from the web means that the pace of web innovation will slow to a crawl.”

Or, as he says in another article, “That’s a recipe for stagnation, and stagnation is what we have. It’s leading powerful players like Apple and Facebook to create ersatz copies of the web inside their walled gardens, when what we really need is a more powerful, more robust web.”

But we don’t need better ads. We need a better revenue model. And we don’t have to wait long for these models to appear. They already exist.

Probably the most common revenue model after selling ads is selling subscriptions. Readers pay you a fee to consume your content.

Ben Thompson does it with Stratechery and Matter did it through a Kickstarter campaign/subscription model (before they were bought out by Medium).

But this model has its own problems.

According to this Reuters report, Casey Johnson reported in The Awl, “despite the rise of paywalls over the last few years, only eleven percent of respondents in the US and six percent in the UK say that they have paid for online news in any capacity.”

For instance, you see the influence this type of behavior has had on our favorite bloggers. The ones who are hanging up their cleats because selling ads or the subscription model are not paying the bills.

Figuring out how to monetize a popular blog seems to be the perennial challenge, doesn’t it? How do you make a living from a popular blog?

Dooce, Gigaom, and the food blogger The Amateur Gourmet had to close their doors or focus on more lucrative ventures.

Furthermore, a native ad can’t be blocked. That’s because it’s viewed as content. It shows up in the publishers stream, typically labeled “sponsored content.”

But a native ad doesn’t eat up your battery life or slow down page load speed.

It’s a normal-sized file. And, if done well, it blends in with the rest of the publication’s content. With native ads, advertisers are back to having to entice readers to consume their content.

In fact, the demand for native advertising has grown so much, a lot of publishers have actually opened up in-house agencies to create these ads and fulfill the demand.

But native advertising also tends to require more resources to create, so it may be out of reach for smaller publications.

To learn more about native advertising opportunities, work your way through this list of resources:

Next in line is affiliate marketing, one of the most reliable ways to earn an income online.

The problem is, there’s a lot of bad (and unethical) advice out there on how to approach it, so here are three resources to help you get started:

Next is the membership site as revenue model. It’s really more than just a private club; it’s an experience.

And the experience that any smart marketer must create is powered by content, first and foremost, because that’s what people are looking for. But what they really crave is something much deeper and meaningful.

That’s exactly why membership truly has its privileges — for both you and your prospects, customers, and clients.

Here are three podcast episodes that will help you understand membership sites and what you need to build one:

5. Build a business around it

Finally, build a business around your publication. That’s what we’ve done here at Rainmaker Digital with the Copyblogger blog.

The content you read here on the blog comes from salaries paid through the sales of our own products — not ads.

And the types of products and services you can create are endless. You could:

The writer still runs the show

Sure, some publications will fail to adapt and sadly die.

But as journalist Charles Arthur noted, “Good journalism, and worthwhile sites, will survive. Or good journalists will.”

In other words, the writer still runs the show. But if you run a publication and want it to thrive, you are going to have to find a way to monetize it without ads.

Previous article: Why a Hot Seat Is Shockingly Good for Business
Next article: Shakespeare’s 5 Rules for Making Up Words (to Get Attention)