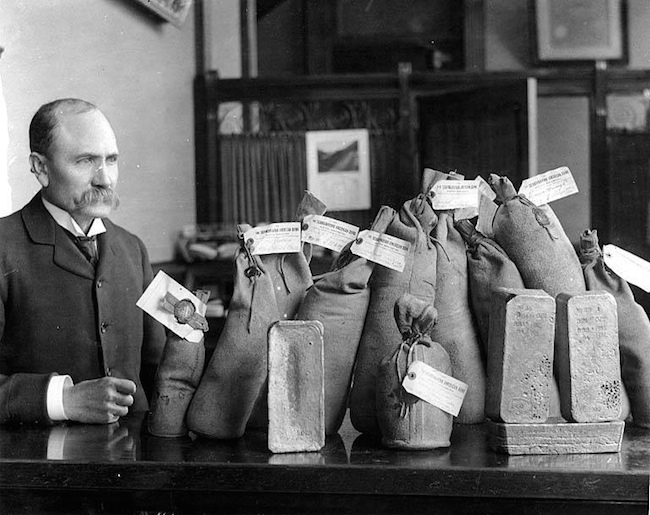 Desperate for new revenue streams, publishers are turning to native advertising in droves.

They are handing over valuable real estate on their web properties to brands that are looking for new ways to drive traffic and build awareness.

And they are charging a premium for this space.

Examples of these native ads run from the advertorial to sponsored content to interstitial ads on mobile phone apps. And options are multiplying. As is the money spent.

The question brands must ask (even though there is no simple answer) is: are we getting a positive return on the dollars being spent on native advertising?

I asked a few players in the space what they thought.

The undeniable emergence of native ads

Consulting agency KIA/Kelsey predicts that the total U.S. social advertising revenues will balloon from $4.7 billion in 2012 to $11 billion in 2017.

That’s an annual growth of 18.6 percent.

As you might expect in an industry experiencing this sort of growth rate, there is no shortage of advice on native ads. (And of course we’ve thrown our hat into that ring.)

In addition, publishers are launching in-house agencies to handle the demand. Onion Labs, Snap, and Studio@Gawker are just a few of the emerging players in this place.

Then there are companies like Sharethrough, Outbrain, RespondHQ, and AppsFire that have launched the networks to support in-feed advertising.

Dan Greenberg, Sharethrough CEO, told me via email, “Native monetization of the feed is a net-new, incremental revenue opportunity for publishers. And when done well (i.e. with content, not standard ads), it delivers a quality, respectful user experience to their readers.”

Often publishers and media middlemen will say that advertisers are running to this format because the return on banners drops every year. This is a notion, however, that Tony Haile, CEO of Chartbeat, says clearly is not the case (more on this later).

So we know native ads are being used … but do they work?

The effectiveness of native ads

He explained that an ad on Instagram for a car manufacturer like Jeep probably isn’t going to expect instant sales. Rather, these brands would measure engagement and reach as success metrics.

“Same probably with most editorial-related content,” he said. “I don’t have data, but I am nearly certain they are not designed for direct response, but more for brand building or buying/decision-making assistance. This means there is no intention with those to get an ROI-driven performance.”

Greenberg pointed me to a number of studies conducted to evaluate the effectiveness of native ads.

The first was a collaboration between between Sharethrough and IPG Labs: Exploring the Effectiveness of Native Ads. 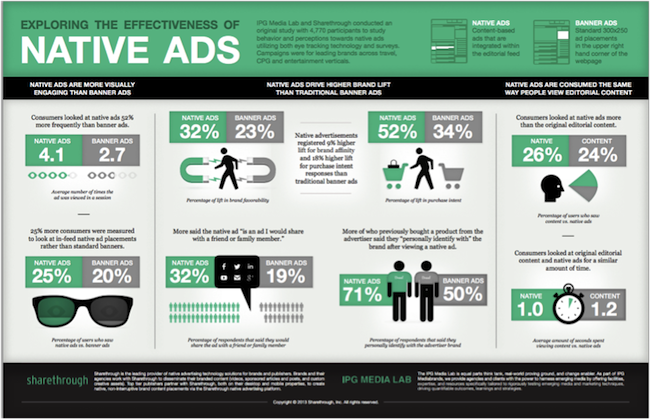 In another Sharethrough report (this time with Neilson Labs) — What Video Advertising Methods Drive the Highest Brand Lift? — we learn the effectiveness between native video ads and pre-roll video ads. 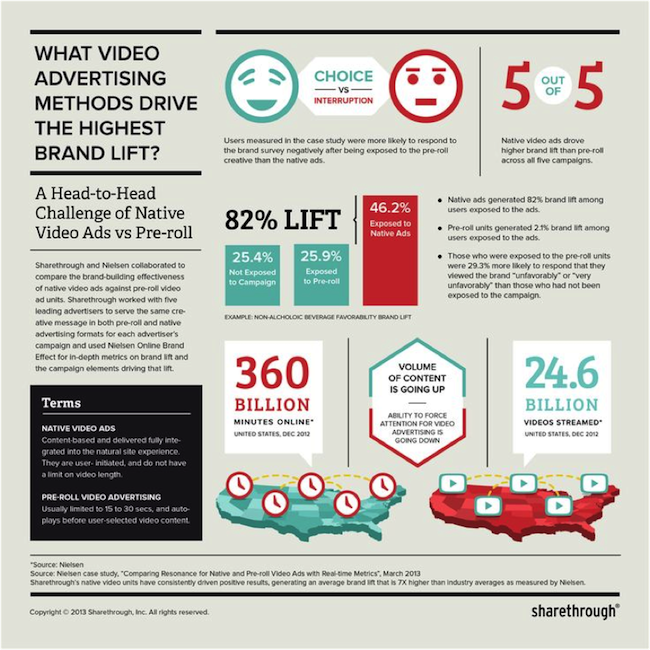 A native video ad is a video that the user initiates and does not have a defined time length. A pre-roll video ad, on the other hand, is a 15- to 30-second video that automatically plays before your video.

Furthermore, in August of last year InMobi’s VP of Products, Piyush Shah, reported that full-page interstitial (another way of saying “in between”) mobile ads were generating 25 times as many video views, seven times as many conversions, and nine times the revenue for advertisers.

He concludes with this: “In general, it appears that interstitials are most effective while promoting games, social, and entertainment apps.”

So far so good.

How to measure native ads

But what are we trying to measure in the first place?

Is clickthrough the best metric? What about engagement? Is that on-site or off-site? Pageviews? Time spent on the page?

And of course the most important question of all: are these ads making money?

Another Chief Revenue Officer, Samantha Skey of SheKnows, says, “We measure the efficacy of native ads approximately the same way we measure efficacy of content. So essentially, volume of interest, depth of interest, time spent engaged interacting with it, and then the desire to share.”

And NewsCred helped identify the proper measurement for the proper social ad option in this handy guide, which you can see below. 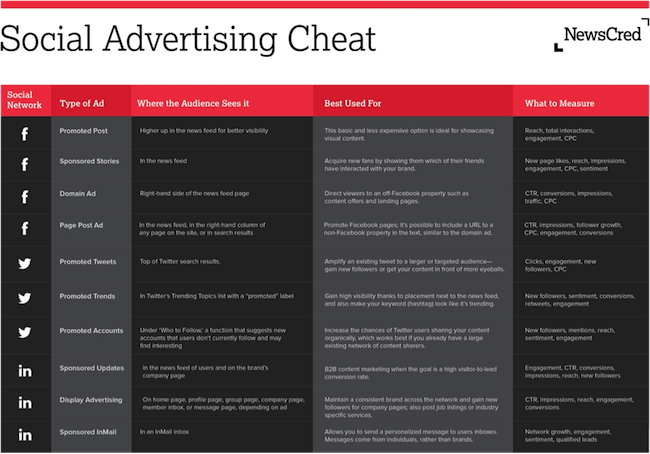 Seems native advertising is living a robust and healthy life. However, there are at least two people who don’t share such a rosy outlook.

His case stands on the assumption that native ads spoil brand credibility. Why go native, he asks, if content marketing is so damn effective?

Brand-told stories work harder for a brand when they appear on neutral platforms (YouTube, for example) or sites owned by the advertiser.

In other words, brands will wake up to the reality that native ads just don’t measure up when it comes to their own content.

There is some truth to this.

The other less-than-optimistic view comes from Chartbeat CEO Tony Haile.

In this Time article, Tony Haile explains that what we know about the Internet is wrong. Commonly held beliefs like “banner ads don’t work,” he says, simply don’t hold up to reality.

Another such myth he crushes is the idea that native advertising is the savior of publishers.

Haile says, “On a typical article two-thirds of people exhibit more than 15 seconds of engagement, on native ad content that plummets to around one-third.”

In other words, when people land on native content, they simply don’t engage.

“What this suggests,” Haile said, “is that brands are paying for — and publishers are driving traffic to — content that does not capture the attention of its visitors or achieve the goals of its creators. Simply put, native advertising has an attention deficit disorder.”

This shouldn’t surprise us.

Just a cursory glance at branded content on sites like Inc., The New York Times, or Gawker and you can see that it can’t compete with the editorial, even though the content obeys the key tenets of content that sells.

One publisher, however, might have a model that’s working: BuzzFeed. And that model features intuitive, great content.

For instance, I shared the Captain Morgan example during the 2014 native advertising report because of the quality of the content.

However, I didn’t say this before, but there was something strange about their account. Captain Morgan hadn’t published to their branded page for over 15 months. Why?

There could be many reasons for this: budget dried up, attention focused elsewhere, they met their goals. I was curious, so I emailed Captain Morgan, who then sent me to an agency who works on their behalf. I spoke with an account coordinator who has not yet gotten back with answers to my questions.

I also emailed BuzzFeed and asked their advertising department. And they have not yet responded.

Based on this page, though, here’s what we know about advertising with Buzzfeed:

And case studies from blue chip brands like Taco Bell, Mini, and Virgin Mobile suggest Buzzfeed is providing value. But how much value? And will this benefit every advertiser? I don’t know yet.

Instead, what I see happening is the price for native ads — particularly of the branded and sponsored content variety — coming down in line with market value. As we get smarter about what to measure, and develop the tools to measure it, we’ll get a fix on the ROI. Shortly after that, the premium prices will fall.

I am skeptical of the dominant, triumphant view of native advertising … but what I think more than anything is that this is an opportunity for writers. Really good writers.

As Joe Lausauskas said on Contently, “Brands used to have a tenuous-at-best grasp on editorial content, but today, thanks to an influx of professional journalists and the shining examples set by brand publishers like Red Bull, Chipotle, and GE, that’s no longer the case.”

In fact, it may be time to proclaim yet another Year of the Writer.

How successful do you think native advertising is at driving real business results?

After reading the stats and anecdotes in this piece, are you more or less likely to turn to native advertising for your business?

Please do join the discussion over on Google+.

Get caught up with the rest of the series

Have you missed any of the posts in Demian’s ongoing series on native advertising? Get caught up now:

Flickr Creative Commons Image via The University of Washington.

Previous article: What Net Neutrality Means For Your Business, and Why You Need to Act Now to Protect It
Next article: Here’s How Lee Odden Writes