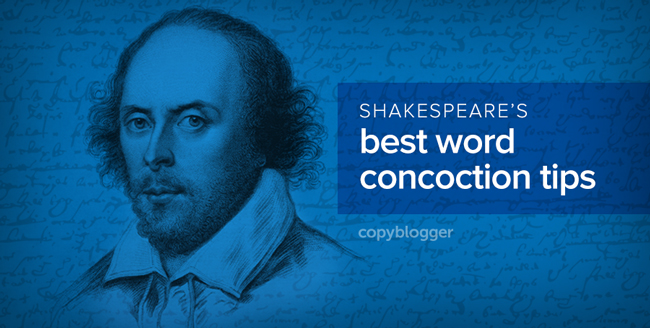 Those are just a sample of the many words William Shakespeare invented.

In fact, some say he invented somewhere between 1,700 and 2,200 words — possibly more. It’s no surprise the English language owes a massive debt to Shakespeare.

But Shakespeare doesn’t have a monopoly on inventing words. He wasn’t the first to do it, and he certainly wasn’t the last to create new words.

In fact, every year we introduce new words into the English language. Some fade out quickly, while others become part of the canon. Here are a few Oxford added to their online dictionary in 2015 alone:

But why make up words to use in your content marketing? Why not just stick with the ones we’ve got?

The reason is simple: to get people to stop what they are doing and pay attention to what you wrote.

Strange words will do that. Particularly in headlines.

Let’s look at five ways Shakespeare invented words that will help you invent your own words for your content.

Playing around with words drives language purists nuts, because it’s lazy to table an idea or shoulder the blame.

But if you google “verbing,” you’ll realize this is a pretty common phenomenon and something we don’t need to be afraid of. Shakespeare certainly wasn’t.

Cleopatra said, “I’ll unhair thy head!” and King Lear complained, “the thunder would not peace at my bidding.”

When you break a step on a porch, it then becomes a broken porch. Or when you filter your water during a backpacking trip, you can then relax by the fire and enjoy filtered water.

And if your companion snores while he sleeps, you can kick him without fear of violating some law against assaulting snoring men.

These adjectives all originated with Shakespeare:

3. Connect words never used together before

Many of the words you see in the introduction to this article are of this variety.

Connecting words is probably the easiest and most entertaining way to make up new words, as seen in modern examples like:

A method called portmanteaus blends the sounds and meanings of two words; blog is a truncated version of weblog (website plus log), and you also see this style in newer words like:

The list of available prefixes and suffixes is long, which is one of the reasons the English language is extremely flexible.

The term for this is agglutination, and it creates words like:

Shakespeare came up with:

5. Invent the word you need

And thanks to courageous and creative souls, we can now say totes (totally) and noob (beginner).

Let me close with this: I’m accused of having bad hearing all the time. My lovely wife says one thing, and I respond with what I thought I heard.

She then asks, “Does that even make the least bit of sense given the context?”

“No,” I shrug, “Which is why I thought it was weird and entirely too funny that you said it in the first place.”

And then I tuck away the word I just created, thinking: That will make a headline happy someday.

So, what are your tricks for making up new words? Got any examples?

Previous article: Why the Ad Blocking Panic Shouldn’t Scare Smart Publishers
Next article: A Sneak Peek at the Redesign of Copyblogger.com