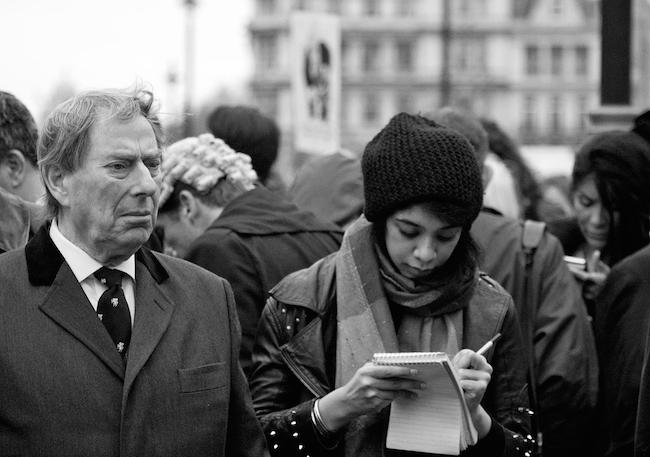 This is the first post in a series on native advertising. An introduction, if you will.

One that states from the start that there is controversy.

Why approach a series this way?

Simple: Native advertising is probably one of the least-known scalding-hot topics in the business world.

In fact, few business people can even define native advertising. And those outside of it are clueless it even exists (we’ve got the data to prove this — will share later).

Yet media research group BIA/Kelsey predicts that by 2017, brands will spend $4.57 billion on social native ads.

How could there be so much enthusiasm and animosity for an ambiguous model?

That native advertising works so well is exactly what concerns people — with journalists leading the charge.

Native advertising polarizes because it pits advertising against editorial. But it doesn’t have to be this way.

Native advertising and great journalism are not incompatible. In fact, they are both advertising models … and they can both be profitable.

Let me make my point by highlighting five ways you can irritate old-guard journalists … simply by citing history or mentioning real current trends.

1. Suggest journalism should be (and usually has been) partnered with advertising

This starts with the idea that one profession (journalism) is sacred while the other (advertising) is profane. And that they should be kept apart.

This notion, however, is a recent development in the history of news.

In 18th-century newspapers, “There was not a sharp distinction between ads and editorial matter,” says Kevin Barnhurst, communication professor and department head at the University of Illinois at Chicago.

People didn’t say, ‘Oh, here’s advertising, here’s editorial matter,’ because it was all the stuff of news.

In fact, people during that era weren’t bothered by the blending of news with ads. Why? Newspapers needed to make a profit to stay afloat.

In other words, a newspaper has always had to stand on its own financial feet.

This is still true today, which is why a publisher — whether digital or print — needs to figure out how to make money ethically, legally, and credibly.

Native advertising is one such mechanism. It melts that wall between journalism and advertising.

And that’s a good thing.

2. Challenge the notion of absolute objectivity in reporting

Joan Didion said, “Writers are always selling someone out.”

We are trying to get the story, the scoop. We have biases, preferences. We have an agenda. Therefore, the argument goes, absolute objectivity in reporting is a fiction.

That idea rankles some journalists.

Yet, as John B. Judis suggests, “A judgment that is more objective is one that is less shaped by one’s prejudices, hopes, fears, and wishes, and vice versa for less objective.”

Your source might have an agenda, a faction they favor, or a point of view they want to crusade. You, however, need to distance yourself from those (and your own) as not to color your reporting.

Judis continues with great advice on how to overcome this subjectivity:

You learn to question your assumptions; you write second and third drafts; you listen to a taped interview again; editors ask questions; and so do fact-checkers. And sometimes, as a result, you are able to write things that are accurate — and in this sense, objective — even if they don’t accord with your hopes and wishes.”

Even as a content marketer I recognize these habits. But can this be said about native advertising? Indeed.

3. Redefine the math of journalism

Benjamin Franklin said that printers (who were the journalists of their day, in the mid-1700s) served the public by exposing scandals and controversy. And for that service the public should thank them — not harass, persecute, or kill them.

Thus, the rise and the long reign of yellow journalism.

Then in the 1920s, journalists developed an awareness of wanting to be a sophisticated group with professional guidelines.

Michael Schudson, a professor of communication at the University of California in San Diego, suggests “journalists’ efforts to codify their increasingly lofty ethical goals — about unbiased truth and ‘freedom from all obligations except fidelity to the public interest,’ as the ASNE canon states — distanced newspapers from their commercial origins.”

And that position has been under attack since the dawn of the digital age.

In one sense it is a model that is working. Forbes is on the way to nearly 30 million unique visitors a month.

But, as David Carr points out, it is a formula that dilutes the magazine’s focus.

At one time, it was a publication known for giving advice to the rich. Now, next to the list of the world’s billionaires you get advice on resume writing, climate change, cancer, and March Madness. Nearly 400 articles are published a day.

What some see as dilution, however, Forbes president and CEO Mike Perlis sees as disruption. And survival.

A 97-year old publication must respond to its environment — or die.

Native advertising is one such mechanism for survival (becoming a technology company is another).

4. Propose content marketing as the solution for keeping reporters and editors employed

Over two decades ago, newspapers and magazines were flushed with cash. Subscriptions and advertising rates were both high (like regular-lobster-lunches-in-the-press-room high).

Then came the Internet.

It didn’t sabotage the traditional business model overnight. No, the Internet just kicked out the traditional model’s supports one at a time. And journalists started to see their jobs vaporize.

To survive, many picked up work with advertising agencies or corporations. And out of this need companies emerged to employ journalists. Contently is one such business.

Some old-school journalists worry the lines between truth and advocacy will be blurred when journalists write for corporations.

I reached out to the VP of Content at Contently, Sam Slaughter, to get his bead on this worry. Here is what he told me:

There’s absolutely a danger that the line between advertising and editorial will get blurred, but that’s been the case ever since the first brand advertised in the first newspaper. That’s why it’s important for anyone writing or buying sponsored content to be fully, even aggressively, transparent about who’s paying — that way readers get to decide for themselves whether the copy is advocating on behalf of the brand, and ignore it if they choose to.”

The italics are his, not mine.

For example, last year Andrew Sullivan was on a personal crusade to skewer BuzzFeed’s use of sponsored content. It appears his beef is with BuzzFeed in particular, but clearly he is concerned about native advertising in general.

True, Sullivan is not your typical journalist. But neither is BuzzFeed your typical news publication. Anyone remotely familiar with either will immediately note the age gap.

Sullivan is a Boomer (who, being fair, could pass for a Gen Xer). BuzzFeed is the publication for anyone under 30, a difference demonstrated by an email Sullivan published:

I think your strong aversion to the sponsored content model is due to two factors: 1) your profession 2) your generation. To someone like me (I’m 27), there isn’t much of a difference between ads and content. In both categories, some are worth consuming and some aren’t. I’m just as likely to go to youtube to seek out a commercial I like as I am to search for a music video. I read that PS4 post without realizing it was an ad but when I found it was (through the Dish) I wasn’t offended and I didn’t feel duped.

So the questions remain: Is the reaction to native advertising a generational gap? Is news just returning back to its commercial roots?

I seek to find out.

As we explore this subject together over the next few weeks and months, you’ll discover it’s not a clean-cut topic.

There is a lot of confusion on both sides (journalism and advertising). We’re talking about a complicated ecosystem … but one you as a publisher or business can benefit from.

In this series you’ll discover:

By the way … just to give you a taste of how confusing the issue is, the next post in the series will share the results from our state of native advertising survey. It will give you a big picture.

Want to continue the conversation?

Do you have any experience with native advertising? Join us over on Google+ and let us know your thoughts …

Previous article: Why We’re Removing Comments on Copyblogger
Next article: How to Turn Bland Text into Sparkling Online Content