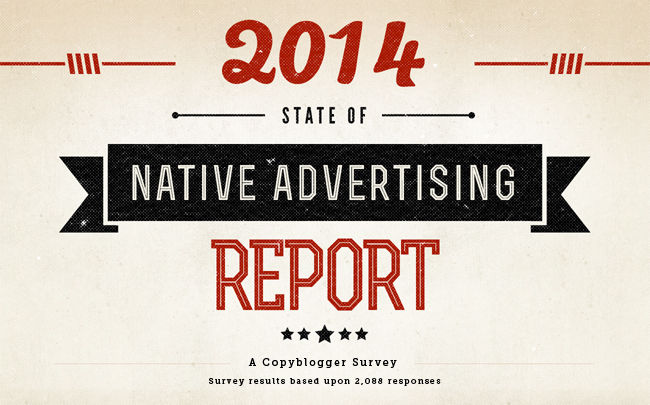 Think Captain Morgan’s campaign on BuzzFeed in general, their 15 Things You Didn’t Know About 15 Captains, Commanders And Conquerors article in particular.

First off, the theme of the article matches the brand’s values: Captain Morgan was a real live pirate who thrived on adventure and raw conquest — a theme not too foreign to BuzzFeed readers.

Moreover, the article matches the editorial standards of BuzzFeed: a list with big images and short, quirky copy — a format their audience expects.

This is classic sponsored or branded content. Now let’s look at another example of native advertising, this time a historical one.

My apologies in advance if it makes your mouth water.

“The Guinness Guide to Oysters” by David Ogilvy is a classic advertorial. Brian Clark examined this ad several weeks ago, and the salient points are as follows:

This guide is a clear example of an advertorial, and it served the same function that cookbooks did for companies like Betty Crocker by providing more useful ways to enjoy their products.

In other words: ignite the imagination of consumers and sales go up.

For modern examples you need look no further than IBM on Atlantic or The Onion Lab videos for Southwest Airlines (see video below or here).

After sponsored/branded content and advertorials, next in line are in-feed ads, content widgets, product placements, and promoted posts and listings.

And as Paul Keers said:

Success, of course, lies in creating content which is right for the brand, which is paying for it; right for the publisher, which needs to retain its identity; and right for the audience, who must find value in the content if they are to engage.

But I’m getting ahead of myself.

The results of Copyblogger’s 2014 State of Native Advertising survey

The point behind this long introduction is that I simply wanted to establish a working definition before I rolled out the native advertising survey results (like I promised).

If you want the quick and dirty, here is a shareable poster designed by Copyblogger’s Lauren Manke.

Below the poster are the results with some commentary, plus a few choice quotes from the 2,088 survey respondents.

Embed this poster on your own site

Copy and paste this code into your blog post or web page:

Survey results and quotes, with commentary

Let’s start with the basics. We received:

And of course, my favorite comment from the survey was this: “What the feck is it?” Well now you know, voter number 348.

1. Do you know what native advertising is?

2. Which of these are considered native advertising?

The correct answer is “All of the above.”

I asked this question because I really wouldn’t consider “Promoted Tweets” or “Facebook Sponsored Posts” to be native advertising (I’ll explain why later in the series), but a few sources did during my research.

3. What are your feelings about native advertising?

There is a good chance that every bit of the 25% who “couldn’t care less” also didn’t know what native advertising is. (This is where using Gravity Forms’ conditional feature would have been a good idea. Lesson learned.)

4. Do you (or your company) have a native advertising budget?

That last one surprised me with a total of 16 people saying they have a native advertising budget MORE than $5,000 a month. Now I want to know who they are.

6. Freelancers and agencies: How much of your work consists of native advertising?

Clearly more people are not going to engage in native advertising than people who are, but just an 11% difference is not that big — a gap that probably could be cleared as we learn more about native advertising.

No real surprise here, but I’m curious if some people think that all content marketing is native advertising. I’m not aware of Amazon or Starbucks engaging in native advertising, but I also don’t know everything. At all.

A few of you asked for a “Sometimes” or a “Maybe” on this one. Good point. It’s hard to tell which way the data would’ve went if there was such an option.

10. How much would it concern you if a brand created content in a publication like the New York Times?

As some of you mentioned, The New York Times is already doing native advertising. Thank you for paying attention.

The results interest me because they are almost split down the middle. The top two percentages equal 51%, the bottom two 49%.

Quite different than what we see with BuzzFeed …

As one respondent wrote, “Aren’t they already?” The answer is yes.

The negative (or bottom two answers) only amount for 28% while the positive gets 72%. My hunch is that The New York Times is seen as serious journalism while BuzzFeed is seen as something completely different.

12. How much would it concern you if a corporation or advertiser reported the news?

Striking results here: almost half of the respondents would be very much concerned. I say striking because corporations already do report on the news. Just about every publication is in business to make a profit. They are corporations.

I pulled out some choice comments from the survey:

“The last few questions are the money questions in my opinion. At first thought we should be concerned about paid advertising mixing with news content creation and production. Meaning the integration of editorial and branded writers under one roof (church and state). But most people don’t trust the news anyway, which is why I think a lot of people are not concerned about native ads. In the end, if the content is entertaining and informative I don’t care who is responsible for funding its creation.” No. 631

“Doesn’t seem like it is very new. Advertorial at best. Very sneaky at worst. I say it is propaganda.” No. 15

“As long as it’s crystal clear in some way that the content the customers are consuming is from a corporation/brand then I don’t see a problem with native advertising in media outlets. I think it’s a very easy way to build a connection with customers so long as it’s done well. Subtlety.” No. 1417

“Depends which side of the fence you are sitting on. Advertorials are a great tool to promote companies, but in my experience, wordsmiths such as myself can create the perception that a company that knows absolutely nothing on the subject, is an authority on it. It is misleading but a necessary marketing tool for companies to get ahead. In the end however, it can only take them so far. Success shows in results, not marketing fluff.” No. 1822

“Content presenting itself as editorial content but being created by a brand gives me the feeling of being misled when I realize what it is.” No. 971

In the next article, we will dig deeper into the definition of native advertising, explore its origins, and discuss the three most recent disruptions in business that have made the landscape ripe for native advertising.

Want to discuss the results of the survey?

We’d love to hear your thoughts.

Write a blog post about our 2014 State of Native Advertising Report (using Lauren’s poster as a centerpiece if you wish), and tweet the link to @copyblogger so we can take a look.

You can also join the discussion over at Google-Plus.

Previous article: How to Use Internal Cliffhangers
Next article: 5 Ways to Build Long-Lasting Authority