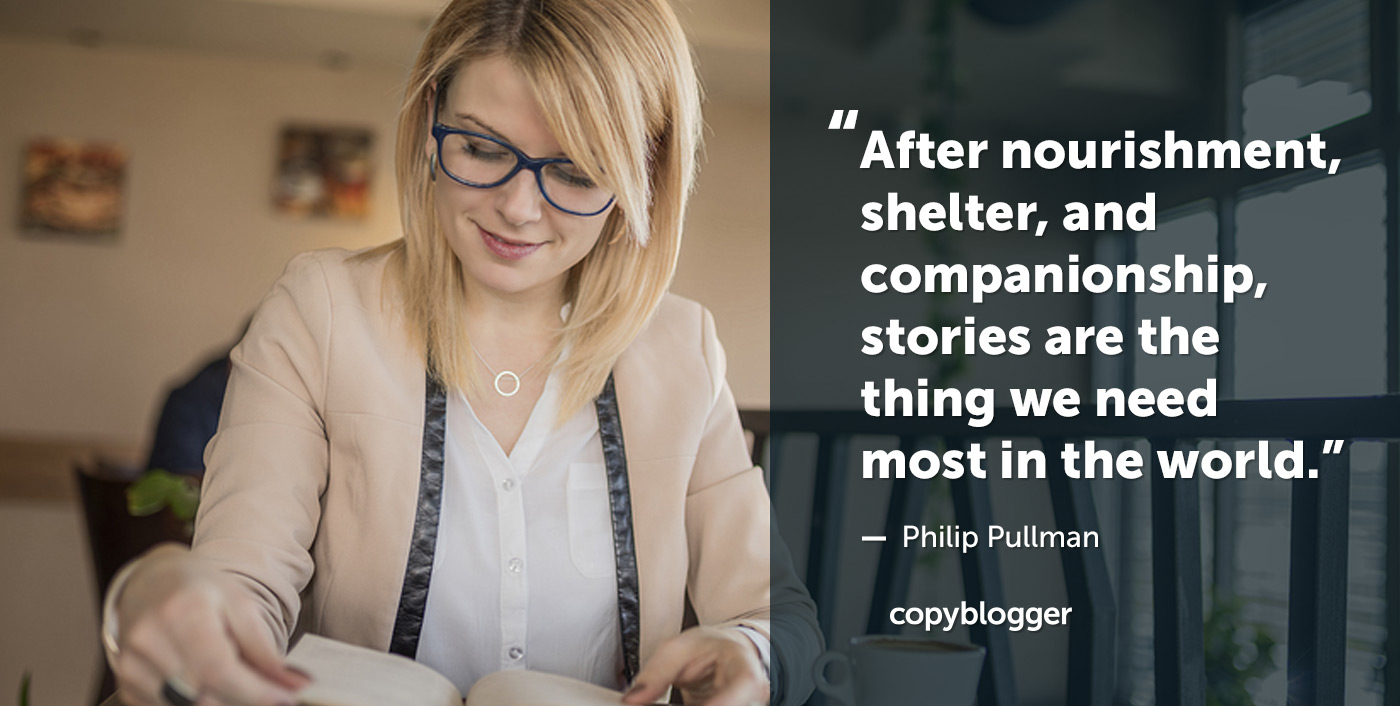 We’re surrounded and enmeshed by stories 24-7.

Stories influence every facet of modern life, and in our attention and automation driven economy, they’re more important than ever when you want to reach an audience.

Luckily, humans are evolutionarily hardwired for story. Since the birth of language, storytelling has been central to our progress.

For thousands of years, before the birth of writing, stories passed down time-tested wisdom from generation to generation in songs and epic poems.

“Stories are central to humanity, for they gave form to human imagination, which is the first requisite for progress.” – Byron Reese, The Fourth Age: Smart Robots, Conscious Computers, and the Future of Humanity

Without a story, it’s almost impossible to spark imagination.

Stories train our brains to envision solutions to our problems, and civilizations were built on our ability to do just this.

So what makes your story memorable?

Perhaps all stories are somewhat unique — depending on who’s telling them and how — but great stories all share a common DNA.

There is a vital core to great storytelling, and it often involves a blueprint. Every screenwriting instructor will tell you this.

“After nourishment, shelter, and companionship, stories are the thing we need most in the world.” – Philip Pullman

A great story can be a cautionary tale, or hint at a bigger problem in our society

A high school chemistry teacher and his family are barely scraping by on his meager salary. Their son has cerebral palsy and they become pregnant.

When he is diagnosed with a terminal lung cancer, he faces an ethical dilemma out of necessity.

Should he turn to a life of crime to both feed his family and pay for needed medical treatments the family cannot afford?

A college track coach, frustrated by a lack of proper footwear available to his athletes, and inspired by a promising sprinter, turns to pouring rubber into a waffle maker to try to make a better running shoe.

His early attempts fail, he burns himself, and he glues the waffle maker shut a few times, but he never gives up. He perseveres to create a homemade solution he initially sews to the bottom of a pair of shoes.

His runners’ first tests of the shoes are like they are shot out of a cannon.

From selling the shoes out of the trunk of a car, to launching his own line of footwear on two coasts, his “waffle” shoes go on to be worn by superstar athletes the world over.

A story can begin with tragedy and end with redemption

At a very early age, a little boy witnesses the death of both his parents by a criminal in a mugging gone sideways.

He grows up to be an influential billionaire industrialist, and secretly trains himself to become a feared, crime-fighting vigilante, and protector of the weak.

In a city of exponentially growing corruption and crime, he embodies hope for a population with little to spare.

Alright, so if you had your pop culture detector on you probably guessed each of the wildly popular stories above.

The first, considered “one of the best television shows ever made,” is the inciting event of Vince Gilligan’s Breaking Bad.

The cult hit earned 16 Primetime Emmy Awards and 58 nominations, a Guinness World Record as “the most critically acclaimed show of all time,” and had an unprecedented 10 million viewers for its finale, making it one of the most watched cable shows in America.

The second is the condensed origin story behind the mega-brand Nike, Inc. Their story is the backbone of the world’s largest supplier of athletic shoes and apparel, and it’s used as a company lodestar.

In fact, Nike has a culture of storytelling in their business model. They teach their story to every employee, a literal cult of innovation.

The third is the timeless story of “The Dark Knight,” aka Batman, a multi-billion-dollar comic book character franchise built solely on the imaginations of a handful of dedicated artists and writers.

What helped turn these simple stories into franchises and enduring brands?

They stick with us because they tap into the core of what makes us human.

“… Over the last several decades psychology has begun a serious study of how story affects the human mind. Results repeatedly show that our attitudes, fears, hopes, and values are strongly influenced by story. In fact, fiction seems to be more effective at changing beliefs than writing that is specifically designed to persuade through argument and evidence.” – Jonathan Gottschall, “Why Storytelling Is The Ultimate Weapon”

Neuroscientist Michael Grybko and I discussed the research behind great storytelling on The Writer Files podcast, including: how empathy makes storytelling such an effective tool, why Hollywood continually taps into the hero’s journey, and how blueprints help writers connect with their audiences.

Remember that markets are conversations, and conversations are traditionally between two human beings in a natural tone.

What makes us remember or share a conversation is empathy, shared emotion, and our mind’s ability to truly sync with the storyteller.

It’s why TED talks are slightly more engaging than that info-dump you get from the cold-call kid trying to sell you modern windows for your historic house.

In Five Stars: The Communication Secrets to Get from Good to Great, author Carmine Gallo references the work of a research team at Princeton using fMRI brain scans to study subjects engaged in storytelling.

Their research showed that as a story was told, listeners’ brain waves synced to each other, and with the storyteller.

Why stories sync our brains

Mirror neurons allow us to become a part of the story fabric, and Mr. Grybko reasoned that we evolved this way because it’s the most effective way humans impart knowledge to one another.

The same research also revealed the types of stories that synced listeners most effectively:

“Only a story, a comprehensible narrative, can trigger alignment among all listeners. In addition, ‘only when we use the full, engaging, coherent story do the responses spread deeper …’”

“The researcher’s conclusion confirmed … a listener’s brain mirrors a speaker’s brain when the speaker is telling a story about real-life experience.”

Conclusion: Storytelling is like a flight simulator for life, but for it to be effective it needs to be believable, conversational, and carry an emotional weight.

We are all competing with the same day-to-day cult of busyness and barrage of digital infotainment.

Two of my favorite quotes from OG Madman David Ogilvy sum it up:

“Tell the truth, but make the truth fascinating.”

“You cannot bore people into buying your product; you can only interest them in buying it.”

Research will help you get to know your audience intimately and understand the mood they’ll be in when they find your story.

Then study the great storytellers of our age. You no doubt already have a pretty good head start if you read fiction or watch Netflix.

Think like a screenwriter, a TV writer, or a serial thriller writer.

If you treat your content as a serial your readers can find and binge — like a tentpole movie franchise, an addictive TV show, or a suspense novel series — you can grab and keep their attention.

These three simple models will help guide your way toward storytelling success.

Take a page from a small, but incredibly talented, four-person motion graphics company from the late ’70s. It was originally called the Computer Graphics Lab (CGL) but became famous via Lucasfilm, and is now known as Pixar.

After joining forces with George Lucas, it became “… a corporation in 1986, with funding by Apple Inc. co-founder Steve Jobs, who became the majority shareholder. Disney purchased Pixar in 2006 at a valuation of $7.4 billion …”

One of Pixar’s own Story Artists shared the company’s 22 Rules of Storytelling, which went viral on Twitter.

You could cherry-pick any or all of the rules to add gravity to your own stories.

One that stands out as instantly relevant is the technique bestselling author Daniel Pink labelled “The Pixar Pitch.”

“We are pitching all the time … and there are all kinds of ways to pitch. One of my favorites is called ‘The Pixar Pitch.’ It turns out every Pixar movie has the exact same story structure you can identify in six sentences.” – Daniel Pink, “This is how to pitch your idea like a Pixar producer”

Let’s take a look at what he’s talking about:

Pink made a great video on how to put it into action here.

As a fan of the cult hit Community by controversial TV writer and showrunner Dan Harmon, I’ve written about my take on his intuitive method for writing the show that you can apply to most story-centric content.

Harmon created his own condensed version of Joseph Campbell’s “… Hero’s Journey, an algorithm that he used to distill a successful narrative into eight simple steps … [that] takes the protagonist on a journey of self-discovery …

The TV producer has applied his story algorithm to almost every creative project he’s worked on and it has earned him a huge cult following and a recent Emmy award for his animated series Rick and Morty.

It’s hard to ignore heavyweight author Elmore Leonard’s 10 Rules of Writing, from his book of the same name.

You may remember some of his best work including: Get Shorty, Out of Sight, or Rum Punch (adapted into the movie Jackie Brown).

His short stories were adapted into films too (3:10 to Yuma, The Tall T) and I was a huge fan of his FX TV series Justified.

Here are his simple tenets on story, condensed for brevity:

“My most important rule is one that sums up the 10.”

And if you need one final quote to propel you into your story, here’s legendary copywriter Eugene Schwartz on the “first technique of breakthrough copy”:

“A copywriter’s first qualifications are imagination and enthusiasm. You are literally the script writer for your prospect’s dreams.”

See you out there.

Previous article: How to Impress and Score Your Next Freelance Writing Client
Next article: Copyblogger Certification Is Open to New Writers
(Limited Time)