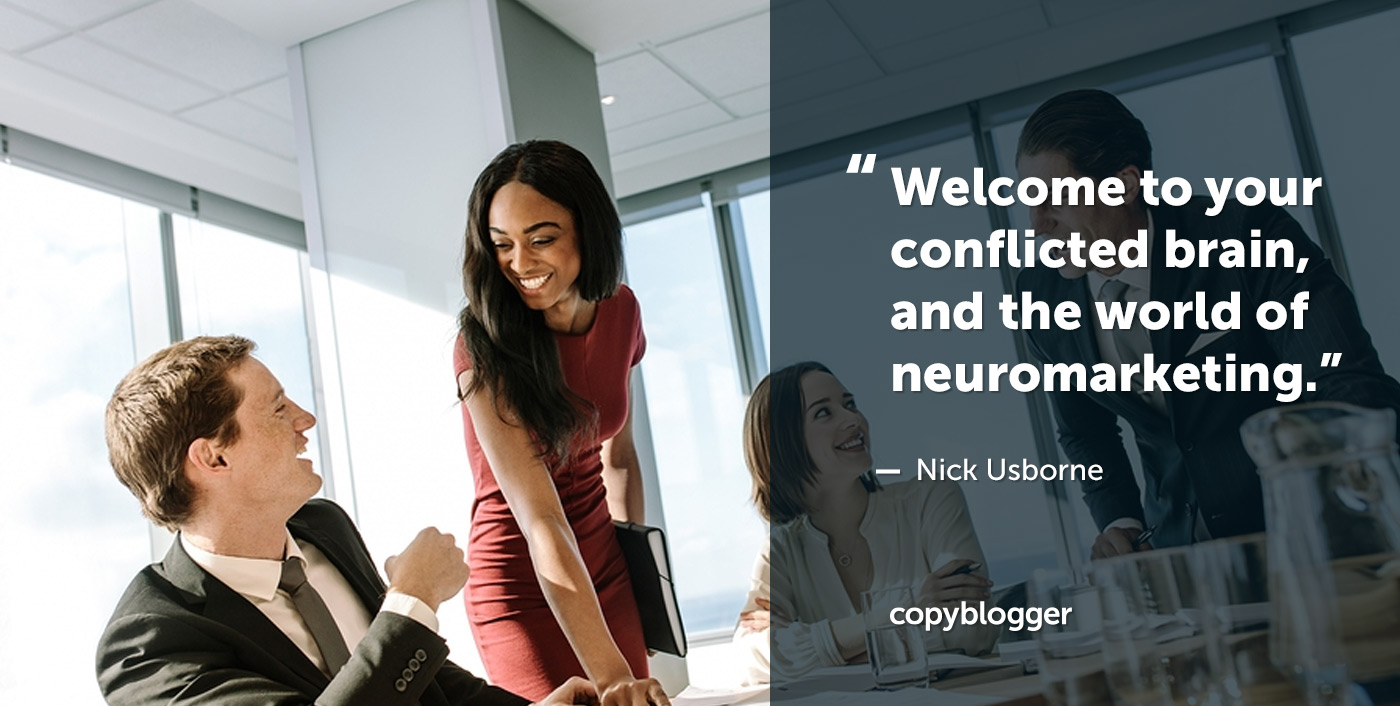 Sometimes we feel in two minds about things.

And then your waiter comes by with the dessert tray.

Oh my … those desserts look amazing.

At this point, many of us find ourselves in two minds.

One part of our mind urgently, desperately wants to grab a slice of that triple-chocolate mousse cake.

Another part is reminding us of the calorie count and the huge amount of sugar in that dessert.

And it turns out … we are, literally, in two minds.

Welcome to your conflicted brain, and the world of neuromarketing

When you look at that dessert tray, your primitive brain lights up.

It’s the part of the brain that kept us alive when we were hunter-gatherers.

Back then, there were a few essential nutrients that were hard to come by. Specifically … fat, sugar, and salt.

Our brains are hard-wired to say “yes” to food that is sweet, fatty, or salty. It’s a survival thing. That’s why we find it so hard to resist the impulse to reach for that dessert, that burger, or that bag of salty chips.

Yes, this is why McDonald’s does so well, right down to the milkshakes.

Yes, this is why Lay’s boasts, “Bet you can’t eat just one!”

And yes, this is why it’s so easy to put on weight, and so hard to lose it.

Messages that come from this primitive part of our brain tend to dominate, simply because they’re all about survival.

The brain sends you these eat-more signals by releasing neurochemicals, like oxytocin and dopamine.

These are the chemicals that make us feel good in anticipation of doing something pleasurable, like eating cake.

Oxytocin is known as the “bonding” hormone. It stimulates feelings of trust, openness, and togetherness.

And dopamine is the “gimme more” neurotransmitter. It’s all about our feelings of wanting, craving, and anticipating.

In other words, these are feelgood chemicals that copywriters can harness.

Everyone likes to feel good.

And what about that other “mind” of ours?

The primitive part of our brain really wants us to eat that dessert.

But there’s another voice in our brain that’s whispering to us about the number of calories in the cake. And the amount of sugar.

Where’s that voice coming from?

That’s our prefrontal cortex at work.

The prefrontal cortex, a more recently evolved part of our brain, is where we do our higher-level thinking and process emotions. It’s where we make sense of our day-to-day reality.

It’s the sensible, rational part of our mind.

It warns us about the cake, or buying those new shoes, or having that fifth beer.

As we know, usually to our cost, the primitive part of our brain usually wins.

There are feelbad chemicals too

That all-powerful, primitive part of our brain is all about keeping us alive.

It evolved not only to make us reach for fat, salt, and sugar … it also evolved to protect us from danger.

If a tiger jumps out in front of us, we needed to react quickly.

The specific part of the primitive brain involved here is the amygdala. That’s our fight or flight center.

Dangerous things like tigers can fire up the amygdala, stimulate the release of cortisol, and make us want to run.

But here’s the thing:

Neuromarketers have discovered the amygdala also lights up when we are confronted with other, less obvious, threats.

It turns out that words alone can make us feel threatened and fire up the amygdala.

Numerous studies have confirmed this, including “Linguistic threat activates the human amygdala,” published by the National Academy of Sciences.

Even without the benefit of science, you’ve probably felt this on some level yourself.

That feeling of closing up and going on the defensive when you feel you’re being sold at too aggressively.

Well, that’s your amygdala at work. It’s doing what it was designed to do … protecting you from harm by releasing feelbad chemicals, like cortisol, into your system.

And nobody reaches for their wallet after reading a sales pitch that makes them feel bad.

In the words of neurologist, Antonio Damasio, a professor at the University of Southern California:

“We are not necessarily thinking machines. We are feeling machines that think.”

In other words, forget about appealing to the rational, thinking side of your readers. Forget about the prefrontal cortex.

Instead, appeal to their feeling side, via the more primitive part of their brains.

Most of us already know that. As copywriters, we understand that we should be appealing to our readers’ emotions.

But what a lot of copywriters and digital marketers don’t understand is that there’s a huge downside to pushing those emotional buttons too hard and too often.

Because that just gets the amygdala all riled up. Followed by the release of cortisol.

Instead, engage with your readers. Be on their side. Speak to them in everyday, conversational language.

Use a ton of positive language. Go easy on the negative stuff.

Take this more positive, respectful, and conversational approach, and those feelgood chemicals will be put to work on your behalf.

Remember, our behavior is ruled primarily by our emotions.

Our emotions are driven by neurochemicals.

Those neurochemicals will make us feel either good or bad. And if you want someone to buy something, you’d better make them feel good.

Understand all that, and you’ll win every time.

If it feels like this post just skates over the surface of the subject of neuromarketing, you’d be right.

But if it has piqued your interest, I have some book recommendations for you.

I found these books incredibly interesting, and absolutely relevant to my work as a copywriter.

Previous article: The 7 Things Writers Need to Make a Living
Next article: Why the Best Writers Aren’t Always the Most Successful