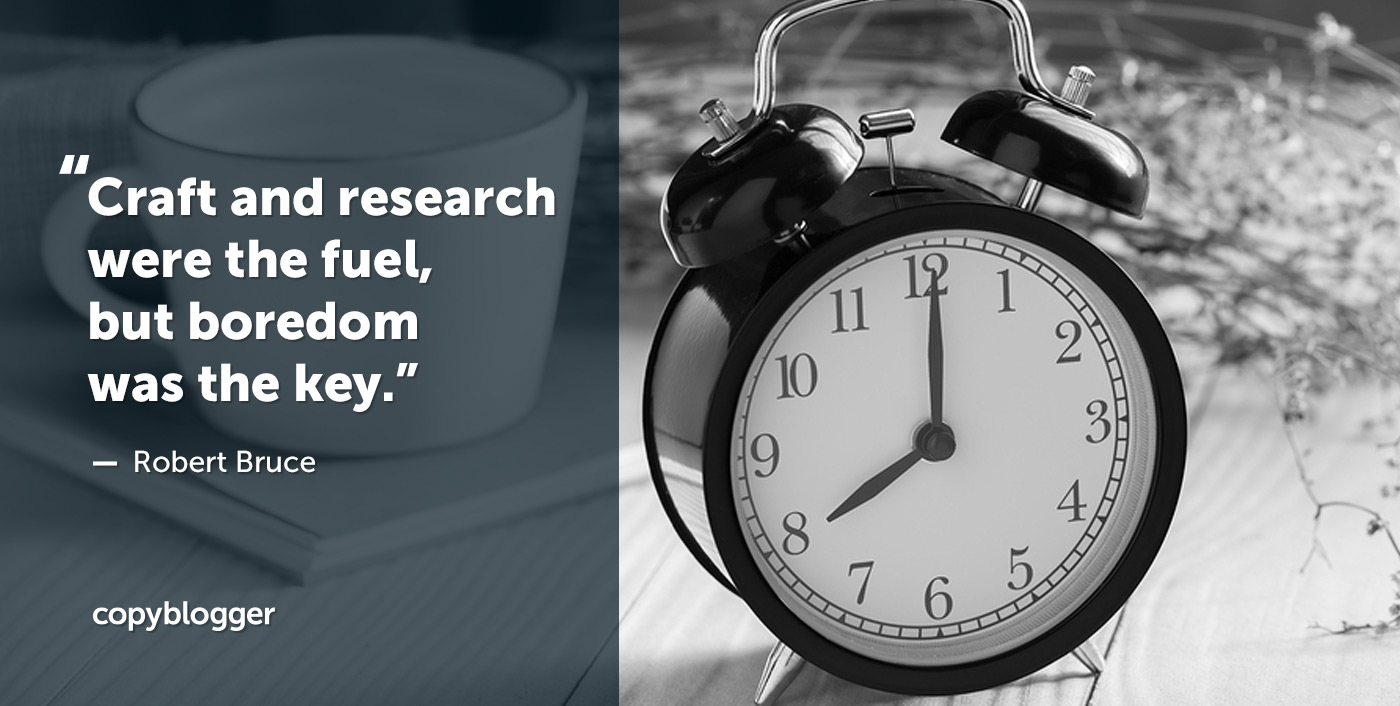 Legendary copywriter Eugene Schwartz created a system of working that, before he was finished, enabled him to write nine books (including the classic Breakthrough Advertising), dozens and dozens of successful ads, and countless articles for well-known publications all over the world.

And he did it in style.

As one of the highest-paid copywriters of the 1950s and ’60s, Schwartz lived very comfortably in Manhattan. He became a world-class art collector and a respected Biblical scholar.

His technique for getting copy written is offensively simple.

Here’s the thing: I know what you’re going to say about this.

“Yeah, thanks for wasting my time. I’m a serious copywriter and this is insulting.”

That’s fine. Ignore this approach at your own professional peril. Or, use it and watch your career accelerate.

Before I lay this thing out, let me be clear that Schwartz was a consummate craftsman.

He worked incessantly to both improve his copywriting skills as well as prepare for jobs through dedicated research.

He even joked that, by the end of a job, he’d know more about a product than the person who’d created it.

He did this by reading, re-reading, and re-re-reading all of the information he could get his hands on about the product and by systematically marking down the benefits — as stated by its creator — one by one.

This gave him unlimited ammunition going into the writing part of the game.

If you don’t know your craft, you’re sunk.

If you don’t do your research — trust me — your gig will end in humiliating failure.

All right, on with the show …

Schwartz said that learning the craft and doing the research are the hard work.

Writing, as many can attest, can be the impossible work.

You stare at the blank screen, blinking and terrified. You get up and grab another coffee, you walk around re-organizing your bookshelf.

You pick at your teeth.

Eugene Schwartz never had writer’s block. He never faced self-doubt in front of the page. How did he become one of the most powerful copywriters in the history of the business?

He set a small kitchen timer to 33.33 minutes and pressed the start button.

Here’s the part where you either roll your eyes and leave in disgust or read on and potentially change your game. Make your decision.

Schwartz describes sitting at his writing desk five days a week. It was a cluttered disaster, but he had a ritual and he never wrote anywhere else.

He’d have his coffee on the left, with a little cream mixed in, and a few pens on his right, displayed just so.

He’d turn to his machine and the ad he was working on. (Admittedly, he didn’t have to worry about Twitter back then.)

Once that timer was set, there were only a few simple rules:

That’s it. He just sat in front of his open page with research notes and a skeleton outline on it.

He’d usually sit in that chair for a few minutes until he got bored, and then he’d slowly start typing.

When the timer went off, he’d stop — even if mid-sentence — and go do anything he wanted for 10 or 15 minutes. Then he’d go back and do it again.

Craft and research were the fuel, but boredom was the key.

It got to a point where he just couldn’t sit there for half an hour doing nothing … so he wrote.

He sat down and set that old timer six times a day five days a week. 3 hours a day.

Nine books. Dozens and dozens of successful ads. Countless articles. One hell of a living.

Anyway, that’s how one of the world’s greatest copywriters got his writing done.

Previous article: This Common Belief Could Be Blocking Your Creative Potential
Next article: Take 15 Minutes to Find Your Winning Difference