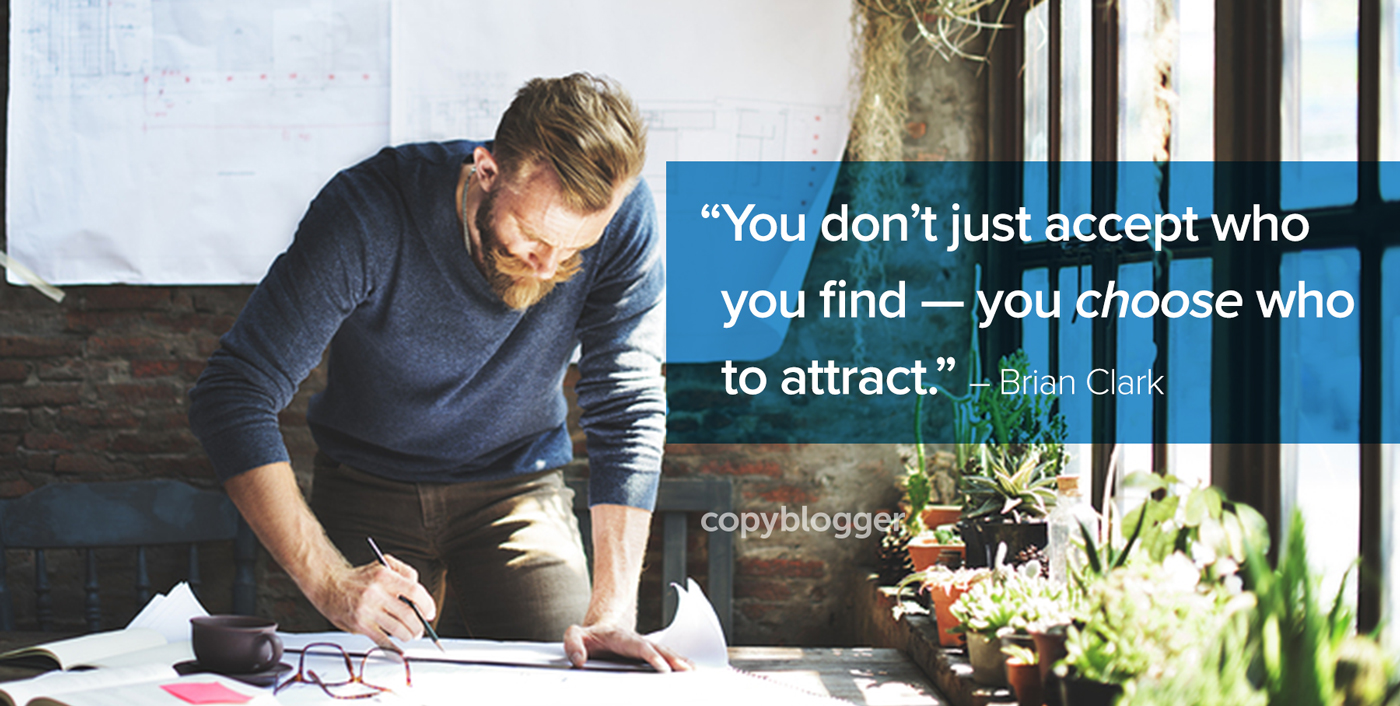 You remember Apple’s “Get a Mac” series of commercials that ran from May 2006 to October 2009?

The commercials were short vignettes featuring John Hodgman as the sweet-yet-bumbling PC and Justin Long as the creative, hip Mac.

Those 66 short spots were named the best advertising campaign of the previous decade by Adweek.

The success of the long-running campaign leads one to believe that Apple certainly knows who its ideal customer is. Of course they do … because they chose their ideal customer, right from the birth of the Macintosh itself.

That doesn’t mean that everyone responded favorably to the ads. While researching for this article, I ran across a commenter who maintained that the campaign had “backfired” because the PC character had actually been more appealing to him.

No, the campaign didn’t backfire (no one runs a series of ads for three years if they’re not working). Instead, Apple chose who not to attract as much as they chose who they hoped to convert.

Apple knew they were never going to get hardcore PC people to switch to a Mac. Instead, Apple used these 66 humorous little stories to target those who were more likely to “swing” toward Apple, after being educated about the benefits by the contrast between the two characters.

Sounds like really great content marketing to me. In fact, given the nature and duration of the Get a Mac campaign, it resembled serial online video marketing more than traditional advertising.

So, the first (and most important) step in our 3-step content marketing strategy is determining your “Who.”

What are your core values?

Apple’s values were well reflected in the Get a Mac campaign — creativity, simplicity, and rebellion against the status quo. These core values were consistently present in the prior “Crazy Ones” campaign, and before that, the iconic “1984” ad.

Some feel that Apple has lost the ability to innovate since Steve Jobs passed. Whether or not that’s true, I think the perception of Apple has changed among those of us who were initially strongly attracted, because their advertising now, for the first time, tries to appeal to a more general audience.

Steve would definitely not approve.

Modern marketing is about matching up with the worldview of your ideal customer. Outside of a monopoly, there is no such thing as marketing that appeals to everyone, and yet, companies still try and routinely fail.

On the other hand, think of Patagonia. The founder of the outdoor clothing and gear company invented an aluminum climbing wedge that could be inserted and removed without damaging the rock face. This reflects Patagonia’s founding core value:

“Build the best products while creating no unnecessary environmental harm.”

Of course, not every company has a core value built into the founding story. Most businesses exist to simply sell things that people want, so it’s up to management to find the core values that they want to reflect in their marketing to attract the right kind of customer.

For example, there’s nothing inherently ethical about ice cream, beyond ingredients. So Ben & Jerry’s adopted the values of its two founders, which had nothing at all to do with ice cream.

Not everyone who likes ice cream necessarily agrees with reduced Pentagon spending and the fight against climate change, but the people who do care about those things turned Ben & Jerry’s into an iconic brand.

It doesn’t have to be all sunshine and light, either. If your core values fall in line with a “Greed is good” mentality, you’ll certainly find people out there who share this worldview. You just have to unflinchingly own it.

You need to understand who you’re talking to, yes. But you don’t just accept who you find — you choose who to attract.

In the Get a Mac campaign, Apple literally created a character that personified what their ideal “swing” customer aspired to be. It’s time for us to do the same.

You can call them personas or avatars if you like — I prefer character. That’s because the first step is the research that allows you to create a fictional, generalized representation of your ideal customer.

As far as fiction goes, we’re creating a character that will be the protagonist in their own purchasing journey that your content will help them complete. Since this journey is based on as much reality as we can glean from our research, it’s more like a fictionalized drama “based on actual people and events.”

When I say the prospect is the protagonist, that means the hero. Your content is a powerful gift that positions your brand as a guide that helps the hero complete the journey that solves their problem. If this sounds like Joseph Campbell’s Hero’s Journey to you, nice work — we’ll elaborate on this aspect in the “What” portion of the strategy.

This journey does not take place in the context of you wanting to sell more stuff. It’s understanding how the prospect thinks, feels, sees, and behaves in the context of solving the problem that sets them on the journey in the first place.

And don’t forget about instilling them with your shared core values. Why would this person choose you to assist them on the journey, out of a sea of other choices?

Because you already see the world like they do in an important way, and they’ll pick up on that shared worldview immediately upon coming across your content. Your core values are your secret attraction spell.

Instead of hiding your world views in the hope of never offending anyone, you now realize the power of being loud and proud — and attracting like-minded people who see you as the only reasonable choice.

Now, most people don’t end up using this representative character in their content, like Apple did with Justin Long in the Get a Mac commercials. It’s really a composite to refer back to so that you never lose sight of who you’re talking to, what you should say, and how you should say it.

On the other hand, the Get a Mac commercials were just two guys standing and talking in front of a minimalist, all-white background. If you’re thinking in terms of online video marketing, you could do a lot worse than looking to this campaign for inspiration.

And think about your explainer videos. Wouldn’t a character that represents who you’re talking to give you an edge over competing marketing approaches?

At a minimum, contemplating the actual use of the character in your content will force you to get things just right. Let’s look at a method for doing that.

You are not your audience

Given that you’re seeking to attract people who share your values, it’s tempting to overly identify with your audience. While you’re going to have things in common, it’s dangerous to think your ideal customer is similar to you in other ways.

You’re a subject matter expert at what you do, for starters, and they are not.

You need to make sure you don’t fall victim to the curse of knowledge, a cognitive bias that occurs when a person with expertise unknowingly assumes that others have the background to understand.

This one assumption alone can sink your content marketing efforts. Plus, you don’t want to assume that the audience shares other characteristics that you have — you want to know, as well as you can, what they’re thinking, feeling, seeing, and doing.

In other words, for you to have the empathy to walk the buyer’s journey in their shoes, you must first see things from their perspective. Then you’ll be in a position to create the content that “coaches” them along the journey.

Let’s take a closer look at empathy, the definition of which consists of two parts:

The process we use for achieving this is called empathy mapping. At the foundation of the exercise is this statement: “Our ideal customer needs a better way to ____ BECAUSE ____.”

Empathy maps vary in shapes and sizes, but there are basic elements common to each one:

To get started, you can download and print a large version of an empathy map here.

The map allows you to easily organize all of your research and other relevant materials. The four quadrants represent the sensory experience of your ideal customer while in the prospect phase.

Ask yourself questions such as:

Jot down needs and insights that emerge as you work through this exercise. Then simply paste those notes in the proper boxes on the large empathy map.

At the bottom of your empathy map, you can also draw two boxes: “Pains” and “Gains.”

In the “Pains box,” you can put your customers’ challenges and obstacles. Ask, “What keeps my customer up at night?”

In the “Gains” box, include the goals your customers hope to accomplish. Ask, “What motivates my customer to solve their problem?” and “What are their hopes and dreams?”

Now … describe your character in detail

You’re now ready to create a written composite of your character. Some people do several paragraphs, or perhaps a page of description. You, being the smart person that you are, might consider taking it further by creating a character bible, just like novelists and screenwriters do.

In this context, a character bible is a detailed outline that lays out everything about your prospect in one place, so you can easily access their personality, problems, and desires. It may seem like a lot of work, but you’ll be happy you did it once you start coming up with the “What” and the “How” of your content marketing strategy.

Next, we’ll begin the process of figuring out “what” information your prospect must have to complete their journey with you. You’ll go from stepping into your prospect’s shoes to walking the buyer’s journey with them.

Previous article: The One-Two Punch of Authenticity and Strategy
Next article: Practical Tools for Finding Courage and Revealing Your True Voice