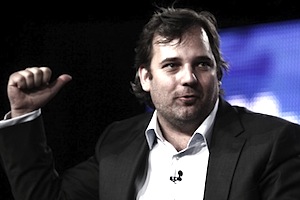 In network television a writer literally runs the show. They are appropriately named “showrunners” because they both write and oversee production.

Throughout the 71 episodes that he wrote and created for NBC, Harmon blogged extensively and nurtured a growing legion of Twitter followers, now totaling upwards of 150,000.

His rapt online audience followed his every word, his unique storytelling and comedic know-how of pop culture made both the show and its creator seem to have one voice.

His online following made him as famous as his tv show

To the dismay of his fans, Harmon was fired as executive producer of Community at the end of its third season because of creative differences with the network, and a very public argument with co-star Chevy Chase.

For many that may have signaled the beginning of hard times, but for Mr. Harmon, it was only evidence of a growing creative revolution within him.

Dan Harmon learned something about staying true to his creative blueprint very early in his career, and he wasn’t about to let the gatekeepers compromise it.

The underlying power of a great story

As an online publisher it is often hard to find the unique story that truly gives your brand or service the volume it needs to be heard above the chatter.

Great copywriters have known for years that the heart of a great story begins by entering the conversation your audience is already having and earning enough trust over time to eventually take them on a journey that satisfies their wants and needs.

How do you find that compelling narrative that truly captures the imagination of your prospects and gets them to take action?

Eugene Schwartz wrote on the “first technique of breakthrough copy”:

A copywriter’s first qualifications are imagination and enthusiasm. You are literally the script writer for your prospect’s dreams.

We’re reminded of what so many great writers have relied on over the years, Joseph Campbell’s “monomyth,” and the underlying framework of many powerful stories throughout history.

Also known as the Hero’s Journey; it’s the distillation of your prospects fears, hopes and dreams, and a key to keeping their attention long enough to reward them with your product or services.

It’s no secret that great stories run the world, and Brian Clark often talks about the importance of making your prospect the hero of your story and guiding them on a journey to fulfill their needs with your content:

The birth of a cult following

As a struggling writer and comedian in Hollywood, Dan Harmon had his share of setbacks.

He spent years attempting to crack the code of successful storytelling. He analyzed thousands of movies. And when he discovered Joseph Campbell, a light went on.

He wrote a pilot directed by Ben Stiller, starring Jack Black and Owen Wilson that was rejected by the Fox Network.

Undeterred, Harmon realized that he didn’t need the permission of Hollywood players to make great shows. He and some friends created an ingenious short film festival called Channel 101 that was part democratic TV network, part YouTube — before YouTube was invented.

He arrived at his own version of the Hero’s Journey, an algorithm that he used to distill a successful narrative into 8 simple steps.

Dan Harmon applies his story algorithm to every element of every creative project he works on, and it seems to be making some waves.

He’s been called a creative genius, and his uncompromising vision has earned him a lot of street cred over the years.

Just last month Dan Harmon and friends raised $400,000 in 60 days on Kickstarter to produce a Charlie Kaufman script (writer of Being John Malkovich and Adaptation), essentially circumventing the Hollywood studio process and taking the funding right to the people who matter most, their audience.

Now he has people like comedian Louis C.K. lining up for similarly fan-based projects, has sold a comedy pilot to Adult Swim, and is in creative talks to write shows on both CBS and Fox.

Life isn’t too bad for a guy who found his creative blueprint and stuck to his guns to provide his audience the story that compels them to keep coming back for more.

Does it keep your audience coming back for more?

Previous article: The Art of Being Interesting
Next article: Could Bad SEO Bring Down Your Business?