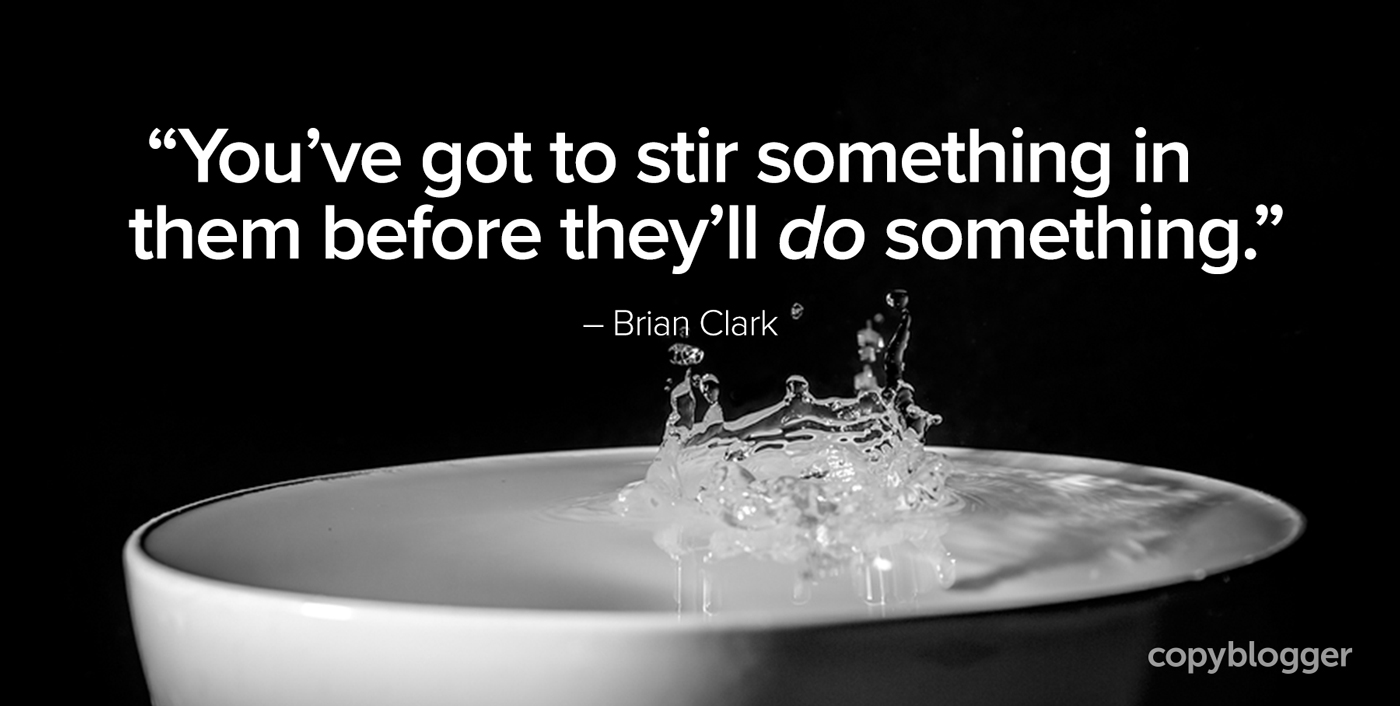 I’m reminded of this David Ogilvy quote from Ogilvy on Advertising:

In other words, if you’re looking for something more than “Great post!” comments, then you’ve got to prompt action. And that means you’ve got to stir something in the audience before they’ll do something.

Now, before we get to that, one easy way to get someone to do something is to simply ask. I’m assuming you’re already using calls to action, but if not, click that last link to read about those first.

Otherwise, let’s focus on what must happen before the ask. What we’re trying to stir is an emotional response.

It’s emotion that moves us to act. In fact, the Latin root for the word emotion means “to move,” because emotions motivate what we do. We don’t necessarily want to make them seethe with anger or burst into tears, though.

The goal is not necessarily to get someone to feel, but rather to want — and to act on that want. Here are several ways to accomplish that.

Emotional responses come when we experience a message that corresponds with our existing beliefs. Appealing to the core values of your audience, how they view the world, and their expectations for the future is incredibly powerful — if you truly create an experience.

Dating back to the time of Aristotle, skilled persuaders understood the power of a detailed narrative. The key is that the story must be so vivid that it prompts a vicarious experience in which they can see the outcome of the story happening to them.

Here’s the beginning of a story that fueled a $2 billion(!) subscription promotion for The Wall Street Journal:

“On a beautiful late spring afternoon, twenty-five years ago, two young men graduated from the same college. They were very much alike, these two young men. Both had been better than average students, both were personable and both — as young college graduates are — were filled with ambitious dreams for the future.

Recently, these two men returned to college for their 25th reunion.”

Do you see the setting in your mind’s eye? Click here to read how the story progresses and see why it succeeded so wildly.

Sometimes when we’re eager to prompt action, we’re tempted to come out of the gate swinging. High energy, high emotion — that’s what will cause the audience to latch on to our contagious enthusiasm and take action, right?

Skilled presenters, ranging from politicians to stand-up comics, know that it’s better to start low-key and build momentum as you go.

Persuasive content and copy are often referred to as a slippery slide. The goal of each and every sentence of your message is to keep people engaged the whole way down, gaining momentum along the way to the call to action.

And although the context is different, there might be no better example than Martin Luther King, Jr.’s “I Have a Dream” speech from 1963:

The speech was ranked the top American speech of the 20th century in a 1999 poll of oration scholars. More importantly, it inspired the huge crowd at The March on Washington to the point that the Kennedy administration felt compelled to advance its civil rights legislation in Congress.

We all belong to various groups, ranging from nationality, to college alma mater, to favorite NBA team. Appealing to the tribal nature of an audience that’s part of your group naturally invokes emotion, while you also benefit from the powerful influence principle of unity.

Unity goes beyond simple similarities and liking, and instead reaches the point of shared identities. It’s inherently an “us against them” scenario, and if you want to mobilize the choir instead of just preach to it, you’ve got to communicate how “the others” present a problem.

It could be about how a competitor has chosen not to serve the needs of your group. Or how outsiders are belittling your tribe in a way that inspires action. It doesn’t have to be ugly, but it does have to motivate the group to stand together and move.

Sometimes, you can even use unity to inspire others to join the group. This happens because of another powerful, fundamental influence: social proof.

For example, one of our core values is that we believe that building your business or content marketing engine on someone else’s virtual property is unacceptably risky. When we rail against digital sharecropping, website owners flock to the comments to agree — providing powerful social proof for others to get on board with owning their own platform.

Group identity is powerful thanks to our strong need to belong. Emulation works on the same emotional level when you position yourself as a role model to your audience.

Now, that might sound a bit arrogant, and it certainly can be. But if you’ve done the hard work of becoming a likable expert, your audience will naturally choose to emulate you in certain ways, or even desire to be like you.

Think of the whole “personal branding” movement. Everywhere you look, people are becoming micro-celebrities hoping to charge you money so you can be like them — and in many cases, it works.

That’s a little bit too on the nose for me. A smarter approach is to inspire your audience to do something with you, such as join a cause, contribute to a charity, or act in some other way that deepens the broader influence factors of unity, authority, liking, commitment and consistency, and social proof.

This last technique is more of a “what not to do” tip that relates to the other four. It comes down to one of the oldest bits of writing advice around, which is to refrain from “telling” them why they should do what you want them to do while making your case, and instead letting the audience experience the realization themselves.

On a related note, never telegraph the emotional response you’re seeking up front, or a natural psychological defense mechanism may arise.

Emotions are best triggered without revealing an upfront expectation.

It’s dangerous to proclaim a joke as hilarious before telling it, and it’s likewise bad form to lead with “Boy, is this going to tick you off.” In other words, don’t tell people you’re going to go on a rant, just begin and build to the rant.

None of these techniques are going to make anyone do something they don’t want to do. In fact, more often than not the desired action has to be in their best interest first and foremost, and yours secondarily.

In other cases, you may get some action thanks to the previously unmentioned principle of influence — reciprocity. If you selflessly and unconditionally give away something useful, perhaps they’ll do a favor for you in return.

Previous article: 2017 Content Excellence Challenge: The February Prompts
Next article: Transform Your Content from Predictable to Provocative with This Bold Method