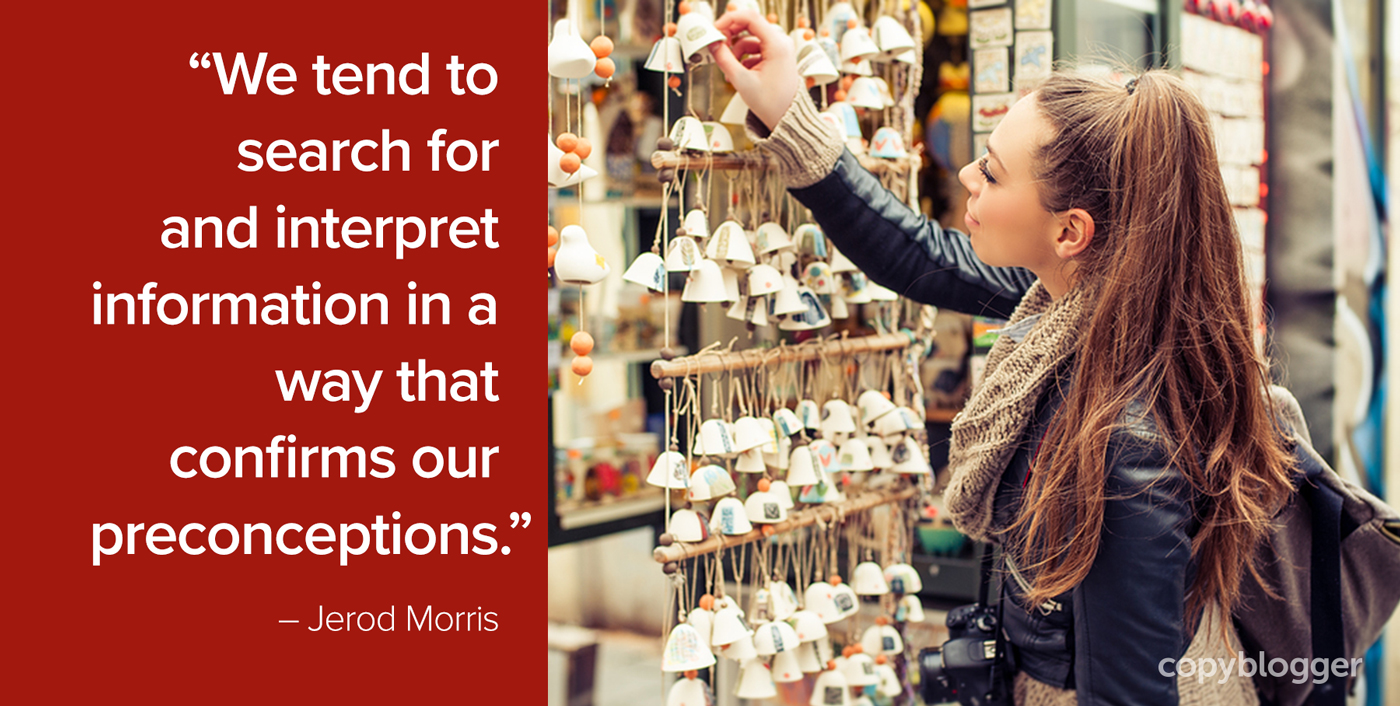 All writing is persuasion in one form or another.

This is more obvious in some types of writing than others, but it is nonetheless true for all.

When it comes to copywriting, it is clearly true. Every piece of copy we write should drive a reader toward a specific action.

“Writing gives you the illusion of control, and then you realize it’s just an illusion, that people are going to bring their own stuff into it.”
– David Sedaris

But even the best piece of copy in the world doesn’t actually control a reader’s actions. Well-written copy only provides the “illusion of control.” What a reader does after reading is dependent on the “stuff” they brought into it.

That “stuff” includes past experiences, preconceived notions, and, above all else, cognitive biases.

Let’s discuss a helpful handful of these cognitive biases — some you’ll know well, some you may not — and how understanding them and structuring your content in a way that acknowledges and appreciates them will help you connect, compel, and serve better.

What are cognitive biases?

“A cognitive bias refers to the systematic pattern of deviation from norm or rationality in judgment, whereby inferences about other people and situations may be drawn in an illogical fashion.”
– Wikipedia

In other words, cognitive biases are mental shortcuts we all make, all the time, without consciously realizing it, that can lead to irrational thoughts and actions.

We tend to search for and interpret information in a way that confirms our preconceptions.

I sat down to write this article believing that understanding cognitive biases would be useful for content marketers. So, I researched articles that discussed how marketers use cognitive biases to influence decision-making. Naturally, I found many, which confirmed by preconception.

This is called confirmation bias.

In this case, my clear confirmation bias did not lead to a poor or irrational decision. The scientific evidence is quite clear, and ever-expanding, that cognitive biases are indeed constantly affecting people’s decisions and behavior. So, the premise of this article is built on a solid foundation of unbiased evidence.

But what if my goal had been to poke holes in the idea of cognitive biases existing and affecting behavior?

I would have had a hard time finding any credible evidence to support my hypothesis — and, if I did, I would have been much more likely to place undue weight on its validity due to my preconception.

We’ll never eliminate cognitive biases, in ourselves or others. There’s no use trying. All we can do is understand them, embrace them, and endeavor to use them ethically and morally*.

*This is important: There can be a fine line between understanding cognitive biases and then using them for good or exploiting them for evil. If you’re not committed to staying on the ethical and moral side of that line, please stop reading this article now and consider not coming back to this site. You’re definitely not for us, and we’re probably not for you.

Hopefully it’s clear why acknowledging your own natural proclivity for confirmation bias is important. You and your audience will be well-served by your commitment to combating it.

We have a tendency to be affected by our recurring thoughts. Brand advertising is built on that premise.

The more people see an image or a message, the more likely they are to remember the brand, trust the company, and then do business with it down the line.

So if you want to influence your audience with a call to action — for example, trying out our new StudioPress Sites product — then you’re much better off repeating it often, and in several different places.

Consider how often we have subtly and not-so-subtly exposed people to StudioPress Sites as they’ve navigated through the Rainmaker Digital universe over the last few weeks:

You get the picture.

Don’t say it once — say it often, and in many different places.

There is the offer. And then there is how you frame the offer.

For example, we recently had a fundraising drive for The Assembly Call — a live postgame show and podcast about Indiana basketball that I co-host. We have sponsors for the show, but we are also listener supported.

Our goal was to generate $2,613 (more on the odd specificity of this number in a minute) during an eight-day window. We promoted the fundraising drive to our email list of about 3,300 people.

The offer — in this case, more of a request — began with:

“All we’re asking is for you to contribute what you believe our content is worth. If you do find value in what we do, any donation helps.”

Now here is how we framed the donation request:

In fact, this email will go out to roughly 3,300 people … so if every person just donates a dollar, roughly the cost of a gas station coffee, we’ll fly past our goal.”

The initial request left so much open to interpretation: How much should I donate? What’s reasonable? What have other people donated? Will my donation actually make a difference?

Questions like these, left unanswered, can lead to friction that prohibits action.

But framing the requested action based on what’s common and what the range has been — and then explaining how a comparatively small contribution could still make a difference — helped to reduce this friction and induce action.

(In addition, you can see the bandwagon effect at work here: the part that explains what other people have already done.)

We reached our goal in less than 24 hours. I have no doubt this framing had a huge impact.

So, did we play a psychological trick on our audience?

We had many donors who actually thanked us for giving them the opportunity to contribute to the cause. They wanted to support us. We have a good product, a good relationship with our audience, and this was a fair request that we’d earned the right to make.

Because people are more likely to take notice of — and remember — something that stands out rather than blends in. This is also referred to as the Von Restorff effect.

I’ve found it to be especially true when it comes to headlines and email subject lines, and I knew that the amount of donations we’d receive would be in part dependent upon the open rate of the email blast.

The subject line we used was: “Will you help us reach our goal of $2,613?” I also had the email come from “Jerod Morris” as opposed to “The Assembly Call.”

The number shouts from the inbox, inducing curiosity and demanding a click. As does the request of “help,” especially from a person’s name rather than a brand name; it’s compelling.

We never ask our audience for “help” and they rarely get an email from my name. Bizarre. We figured they’d want to know why.

An open rate of 70 percent suggests they did.

And the donations that were coming in as late as a week after sending that email (without another email blast to remind them) suggest that the offer was indeed memorable.

Some of these cognitive biases just make simple sense. Like risk compensation, which suggests that people adjust their behavior in relation to perceived risk — we’re more likely to take a bigger risk when perceived safety increases, and vice versa.

This is precisely why every single product we sell at Rainmaker Digital comes with a 30-day money-back guarantee.

And why we focus on the guarantee toward the ends of promotions.

For example, we recently announced that the price of the Rainmaker Platform was going up. (Spoiler alert: the promo is over; the price has already gone up.)

Here’s what the final email, sent two hours prior to the price raise, looked like:

“Subject: [2 Hours Left] The Price of Rainmaker Goes Up Soon

Start your free, 14-day trial of the Rainmaker Platform in the next two hours so that you lock in the current price (before it goes up).

So there’s no risk, just a massive annual savings you can lock in.

Click here to start your no-risk free trial of the Rainmaker Platform today.”

We’d proudly suggest the Rainmaker Platform to any of our audience members who have a desire to build and sell digital products. Still, that doesn’t mean starting a trial is without risk, or perceived risk.

A few risks people might identify — rationally or irrationally — before signing up:

The copy answers the kinds of questions that will naturally come up before action and can even preempt the fears that cause the questions in the first place.

By dissolving the fears that risks induce, we offer people a more comfortable journey down a path they are already interested in walking (and that we know, long-term, could be a path they’ll be thankful we presented to them).

And this is a big reason why (along with the cognitive bias that induces FOMO, of course) the last day of the promo was by far the most successful one. Thirty-eight percent of new trials during the promo period started on the final day, many after this final risk-compensating reminder email was sent out.

So, is the “illusion of control” really such an illusion after all?

It’s interesting to note that illusion of control is also a cognitive bias, suggesting “the tendency for human beings to believe they can control or at least influence outcomes that they clearly cannot.” (Via RationalWiki.org)

You’re not there with your reader as she consumes your words. You’re not inside her brain, finding out exactly how she’s interpreting what you’ve written. You’re not present to offer any additional arguments about why she should take the action you’d like her to take.

So any control you feel you have as a copywriter does, indeed, seem like an illusion.

We know that well-written copy is more likely to influence desired outcomes than poorly written copy.

We know that well-written copy contains words that make sound logical arguments, that empathize, and that possess the ability to compel useful emotional reactions in a reader.

Your ability to understand and acknowledge cognitive biases with your copy allows you to empathize with your reader, and that is what opens the door to compelling a useful emotional reaction.

And we know that emotion drives action more than logic — the latter of which serves more to justify than compel.

Look, who am I to defy the words of a writer like David Sedaris? And to deny a known cognitive bias? Writing probably does give you only the illusion of control.

By committing to a better understanding of the “stuff” our readers bring to our words, we increase our ability to turn an illusion of control into … let’s call it … an opportunity to connect.

And when we connect, we have a chance to compel — a privilege and responsibility that truly unlocks the next level of service to our audiences.

Previous article: How to Create Content that Deeply Engages Your Audience
Next article: 2017 Content Excellence Challenge: The February Prompts