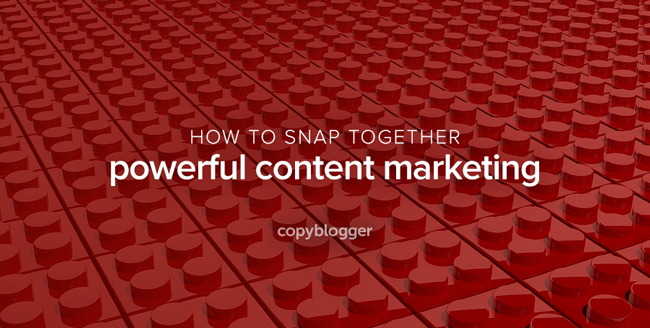 Shortly after the release of The Lego Movie (2014), more than one professional marketer went on record to say that it was the best piece of content marketing they’d seen in a long time.

Well, I finally saw the movie, and I don’t buy that claim. Why?

To be honest, I have a hunch it won’t pass a simple test — a test I’m calling “The Six Marks of Effective Content.”

And what exactly are those six marks? They are:

Seems easy enough to pass, but before we dive in, do me a favor if you have seen the movie: Think through how you would grade the movie based on these six marks. And then let’s see how we compare at the end. Cool?

1. A headline that instantly commands attention: A+

If we were to evaluate the title of the movie based on the four U’s of headline writing, The Lego Movie is a below-average headline:

However, the headline doesn’t have to do much because of the hefty value of its brand name. Except for space aliens, everybody knows what Lego bricks are.

See, The Lego Movie as a headline is equivalent to announcing “Free Money” or “Sex.” Few people need to be told the value proposition behind those headlines (that first headline was once used by a bank, the second one by a bookstore).

The creators of the movie didn’t have to be clever — just clear and concise.

That’s because we’ve all been waiting forever (whether or not we knew it) for a Lego movie. Just hearing those three words — The Lego Movie — made us all squirm in anticipation like a batch of soft, fluffy, yowling puppies.

But there is a lesson that shouldn’t be missed here: unless you have an A+ brand name, write magnetic headlines.

The movie seems to be off to a good start.

2. An opening that hooks your audience: A

The second mark of effective content is a strong introduction that immediately hooks your audience member — and keeps her reading or watching.

For your content, use short, engaging sentences that could:

The Lego Movie gets an A here because the movie grabs and keeps our attention when we meet the hero of the story, Emmet — an average guy who religiously follows an instruction booklet.

Then, his world is turned upside down. (I will stop there, for those who have not seen the movie.)

That’s the essence of a well-told story.

3. An element of education, inspiration, or entertainment: A

A balanced piece of content will usually have a mix that is 40 percent education, 40 percent inspiration, and 20 percent entertainment:

Ancient wisdom, if you think about it. The movie gets an A in this category.

4. A persuasive story: A

A captivating novel, movie, or TV series begins with a character in conflict, then amplifies that conflict so that life becomes miserable, and eventually ends in a satisfying resolution.

The same is true for your marketing story. You need a hero, a goal, an obstacle, a mentor, and a moral.

You can also use metaphors, case studies, examples, and other techniques to engage your audience and illustrate a point.

Of course the movie aces this one.

Yes, great content tells stories that show people just like you overcoming obstacles and attaining their goals. It shows how customers become better versions of themselves — how customers can overcome external and internal obstacles to gain what they’re searching for.

In the sea of distraction that is the web, don’t be afraid to spell it out. Be clear and direct. Clarity is golden.

Here are a few examples of morals in content marketing:

So, how did The Lego Movie do?

While the message wasn’t necessarily direct, it certainly was clear: You are special. Believe in yourself.

That’s certainly a moral, but I think it’s a lame one because when everyone is special, aren’t we all really just average then? 😀

Every piece of content has one goal: to get people to act. You might want them to:

This is where The Lego Movie fails — as a piece of content marketing. And I’m sure the film’s creators don’t care because their primary goal was to make an entertaining movie, not push more Lego products.

Content marketers may occasionally create content that is sheer entertainment without a CTA — but for the most part, when you market your business or ideas, your goal is to get people to act.

The best way to get people to act is to tell them what to do. Forget the CTA and you fail. Simple as that.

Okay, so the movie scored better than I thought it would on this little test. You’d think it didn’t really stand a chance since I created the rules, but it got five good marks out of six!

I think the last poor mark is the most damaging one, though. If content marketing had been the movie’s main purpose, the execution was average at best.

Have you seen the movie? Did you think it was the best piece of content marketing you’ve ever seen?

What do you think of my six marks of effective content? Any you would add to the list? Subtract?

Let me know your thoughts in the comments.

Previous article: That Was Then, This Is Now: Welcome to the New Copyblogger Website
Next article: 3 Resources to Help Your Content-Driven Website Flourish