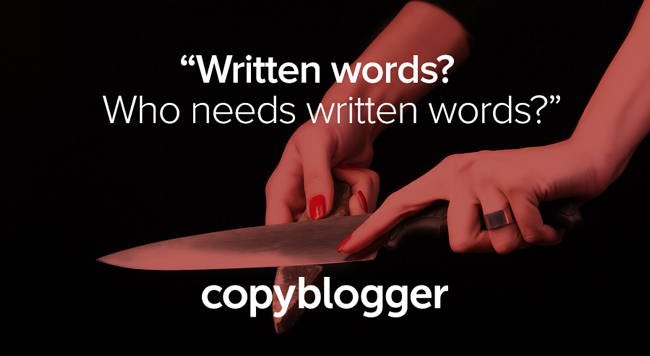 You know the drill: another day, another piece of content to connect with your audience.

It reminds me of that classic Dunkin’ Donuts commercial, “Time to make the donuts.”

We are all like that little round Fred the Baker dragging our sorry selves to our keyboards to create yet another readable, but forgettable, post.

I say, enough of this twaddle. Let’s shut down this blog and be done with it.

Listen: It was just a matter of time.

A brief history of the best decisions we ever made

In what I am told was a long, torturous, heartsick, alarming, and titanic (yada yada) decision, Copyblogger closed comments on the blog. Something about the conversation moving to other platforms and too much spam.

All I could think was, “Holy hell, Copyblogger actually has backbone! I want to work there.”

So I came onboard. But still, I had my doubts. And in no time, my suspicions were confirmed: that backbone was weak.

My faith was restored. But only temporarily.

Am I the only one who saw the writing on the wall?

With the closing of comments and the death of our Facebook page, I thought it would only be a matter of time before we shut down the blog.

Imagine my surprise when that didn’t happen. During a routine editorial meeting I said, “So, when are we shutting down the blog? What are we waiting for?”

You would’ve thought everyone on that video call had just found themselves with nothing but a wig and a pocketknife in a bathhouse full of limber freemasons.

At that point, I knew I had my work cut out for me. And this was going to take more than a little cajoling. So I convinced them to make me VP of Educational Content — the person who oversees the blog.

I had to do something. This blog was going nowhere.

What I don’t understand, though, is how they didn’t see it coming. There were plenty of harbingers of darkness along the way.

I mean, let’s start with the new “podcast network,” Rainmaker.FM.

It’s like a brand-new, shiny content platform. With a site like that, who has time for a dusty, nine-year-old blog with written words? Who needs written words?

The only thing that keeps me from throwing a fit over this unhinged behavior is that lonely and wounded soul, Demian Farnworth. You should’ve heard him sobbing like a baby after he failed to respond to that chain letter.

In fact, it was so bad I was tempted to reach through the phone and pat him on the head. But alas, I was laughing too hard.

Maybe he’ll do all right with his harmless little podcast, Rough Draft. See? I do have a soft side.

To be honest, the only person who worries me is Brian Clark.

I hear he’s the CEO. Has some kind of power. But there are also rumors he’s into magic. Not surprising coming from a guy who’s got a podcast called New Rainmaker.

The thing you have to understand is that I’m a gal who’s used to getting her way.

Let’s get this straight. I didn’t name my podcast “Hit Publish” because I thought it would be cute. I did it because I like to punish people.

So as of today, the blog is no more.

Go ahead. Try and stop me. You don’t scare me, dear reader.

Whoa there. Hold on. Is this some kind of joke?

This is Pamela Wilson. All that above? That’s Demian Farnworth. Clearly, I need to have a little chat with him. Soon.

I want to take a moment to let you know that not only are we not killing the Copyblogger blog, we’re going to be making improvements to it later this year.

Our plans are to:

Previous article: A Quick-Start Guide to Measuring Your Content Marketing Efforts
Next article: 8 Harsh Truths about Social Media (and 1 Pretty Awesome One)