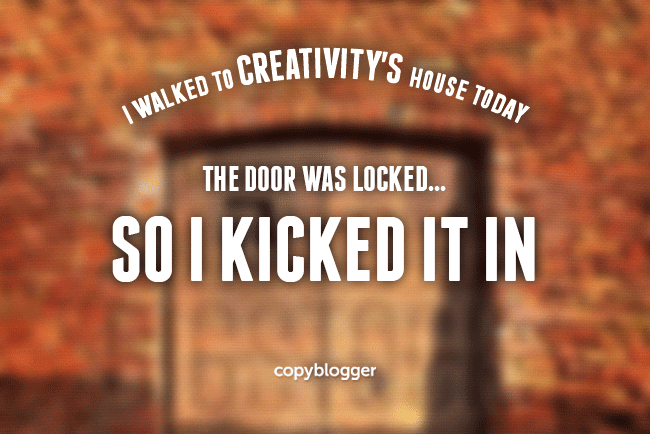 They pull furry mammals out of their hats. Levitate humans. Hide automobiles out of sight.

The great ones make a killing, jet set around the globe, and beat groupies off with a brass-tipped wand.

The not-so-great ones — the average ones — are still amazing.

To this day I don’t know how my daughter knows which card I picked out of that deck (Jack of clubs). And she’s still not telling.

Despite the name, though, what my daughter did — what all magicians do — isn’t magic. It’s a trick, an illusion: “something that deceives by producing a false or misleading impression of reality.”

Getting to that point where the illusion is flawless (thus, magical) involves hard work.

Content creators are no strangers to hard work. But we often view what they do — their level of originality — as magical, something even mystical.

But it’s nothing more than hard work. And everyday creativity. Combined.

A metaphor for the creative process

Imagine you knock on creativity’s door.

It seems no one is home. So this is what you do … kick in the door.

Kick in the door and go inside.

In other words, make yourself at home.

And when someone shows up to evict you, fight them off tooth and nail. Nothing magical about that. The work has to be done.

Moral of the story

Listen: people want to pretend the hard work required to create doesn’t exist. They want the spoils without the sweat.

And because of that the “magic” of a world-class content creator rests NOT in her muse, but in her work ethic.

Which is usually simple and aggressive. Almost unforgivable.

But she doesn’t mind since the reward is the sweet satisfaction of something original.

So … what are you waiting for? Go and kick in that damn door.

Embed this Copyblogger shareable on your own site …

Love the creativity poster by our very own Lauren Mancke? Then copy and paste this code into your blog post or web page:

Previous article: The Decline and Fall of The Great Gate
Next article: Here’s How Ann Handley (the World’s First Chief Content Officer) Writes