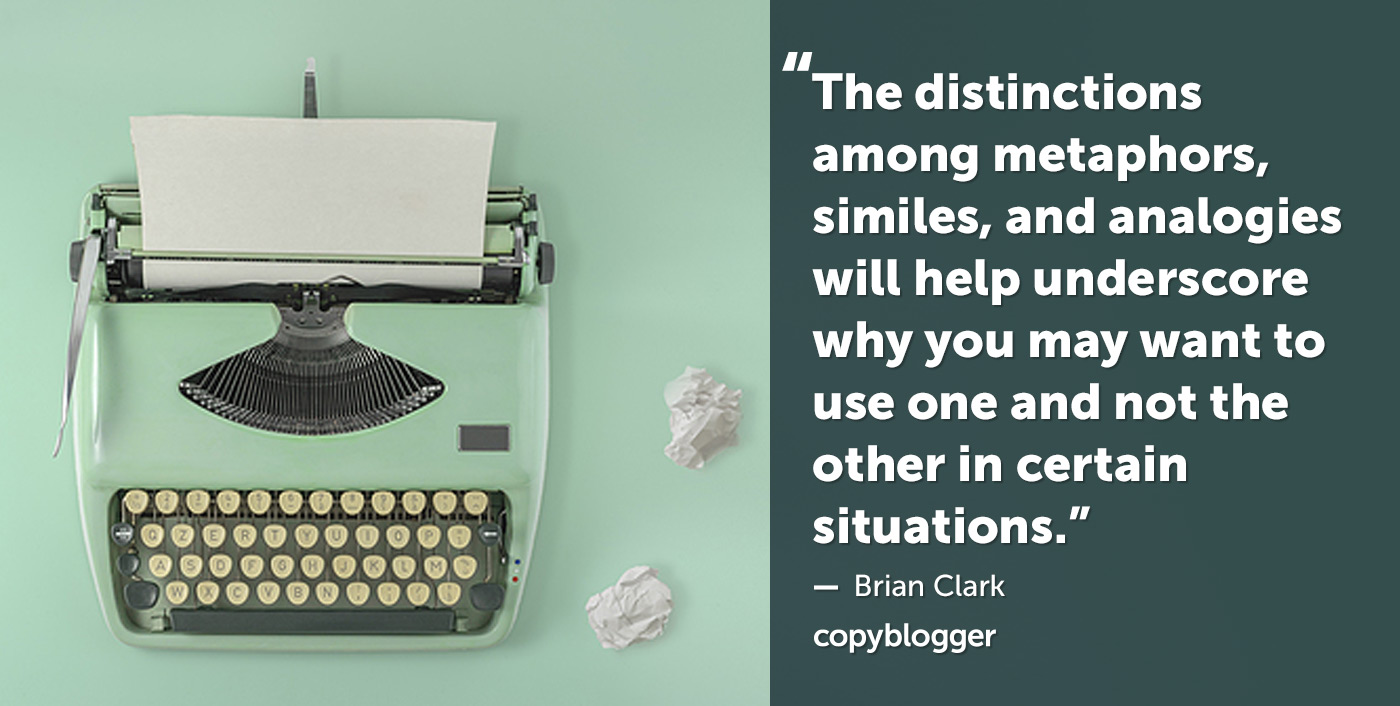 Should you use a metaphor, a simile, or an analogy in your writing?

While all three are closely related, it’s smart to understand the differences. The distinctions among metaphors, similes, and analogies will also help underscore why you may want to use one and not the other in certain situations.

Now that we know metaphors can be powerful persuasion tools, let’s make sure everyone is on the same page from a definitional standpoint.

Let’s take a look at some definitions …

A metaphor is a figure of speech that uses one thing to mean another and makes a comparison between the two.

The key words here are “one thing to mean another.”

So, when someone says, “He’s become a shell of a man,” we know not to take this literally, even though it’s stated directly as if this person had actually lost his internal substance.

A simile compares two different things in order to create a new meaning.

In this case, we are made explicitly aware that a comparison is being made due to the use of “like” or “as.” (He’s like a shell of a man.)

For fun, the next time someone corrects you and says, “That’s a simile, not a metaphor,” you can respond by letting them know that a simile is a type of metaphor, just like sarcasm is a type of irony.

Resist the urge to be sarcastic in your delivery.

An analogy is comparable to metaphor and simile in that it shows how two different things are similar, but it’s a bit more complex.

Rather than a figure of speech, an analogy is more of a logical argument.

There are circumstances where either a simile or an analogy is the more appropriate vehicle for getting your point across.

But coming up with a great metaphor may be your best bet in many situations. A metaphor carries so much more power than a simile, because it’s direct.

Using “like” or “as” to make an open comparison will often diminish the vivid visual you’re trying to paint in the reader’s mind.

Likewise, a spot-on metaphor will spark instant understanding for a reader, without the elaboration that an analogy requires.

From here, we’ll examine specific ways to use metaphor in your blog posts. Headlines, openings, themes, calls to action and more can all benefit from the use of metaphor, as long as the metaphors don’t suck.

We’ll look at ways to avoid that, too.

Did you miss the first post in this series? Read it now: Become a Master of Metaphor and Multiply Your Marketing Effectiveness

Next in the series:

5 Smart Ways to Use Metaphors to Create Irresistible Content

The Persuasive Power of Analogy

Previous article: Why Building the Right Team Is So Critical, with Aurélien Amacker of Systeme.io
Next article: How to Build an Audience in 2020 (and Beyond)