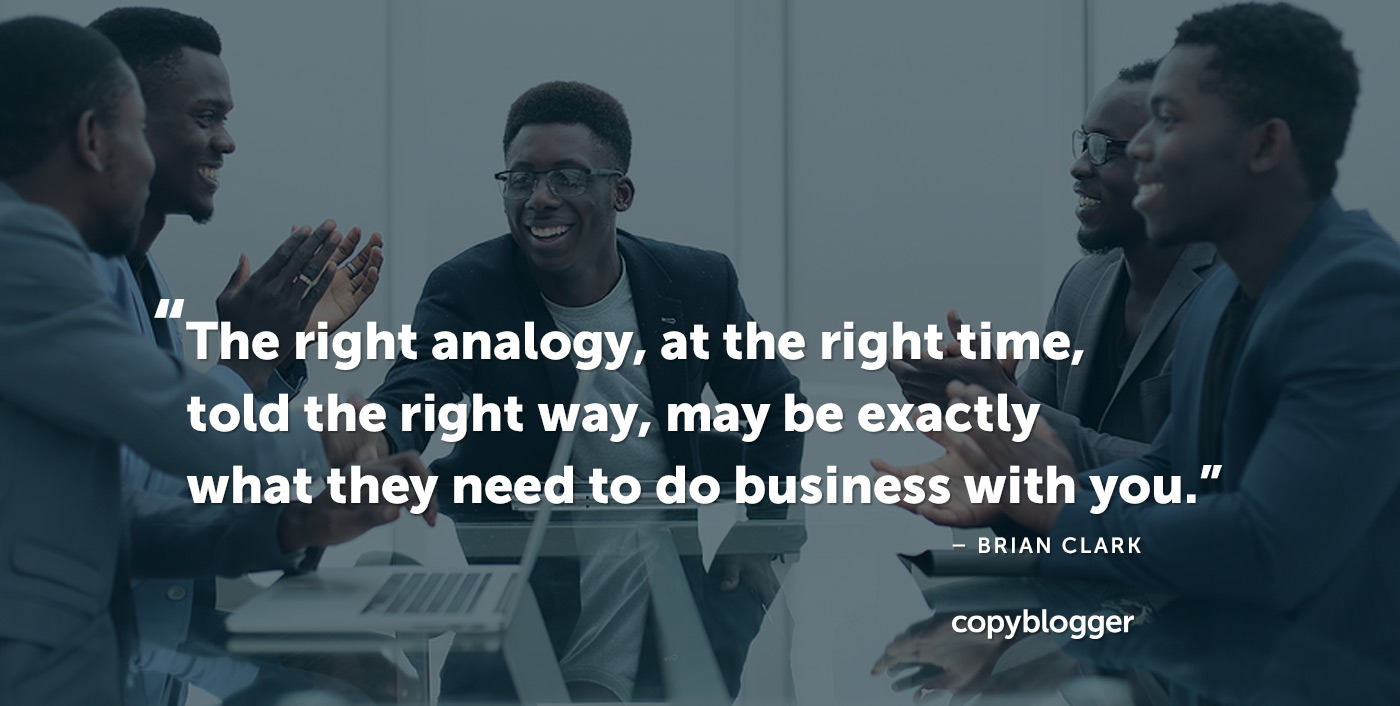 An elderly man storms into his doctor’s office, steaming mad.

“Doc, my new 22-year-old wife is expecting a baby. You performed my vasectomy 30 years ago, and I’m very upset right now.”

“Let me respond to that by telling you a story,” the doctor calmly replies.

“A hunter once accidentally left the house with an umbrella instead of his rifle. Out of nowhere, a bear surprised him in the woods … so the hunter pointed the umbrella, fired, and killed the bear.”

“Impossible,” the old man snaps back. “Someone else must have shot that bear.”

“And there you have it,” the doctor says.

At the heart of things, persuasion is about your audience understanding what you’re communicating. Understanding leads to acceptance when the argument is sound, well-targeted, and the conclusion seems unavoidable.

When it comes to creating effective understanding, analogies are hard to beat. Most of their persuasive power comes from the audience arriving at the intended understanding on their own.

The doctor could have simply said that the old man’s wife had to be cheating on him. But the analogy allowed the cranky patient to come to that conclusion on his own, which is much more persuasive.

Let’s take a second to make sure we’re all on the same page with analogies. It first helps to distinguish them from their close cousins, metaphor and simile.

A metaphor is a figure of speech that uses one thing to mean another and makes a comparison between the two.

A simile compares two different things in order to create a new meaning while using the words “like” or “as.”

An analogy is comparable to a metaphor and simile in that it shows how two different things are similar, but it’s a bit more complex.

Rather than a figure of speech, an analogy is more of a logical argument. The structure of the argument leads to a new understanding for the audience.

When you deliver an analogy, you demonstrate how two things are alike by pointing out shared characteristics (a hunter with an unloaded umbrella and an elderly man who is “firing blanks” sexually). The goal is to show that if two things are similar in some ways, they are similar in other ways as well.

Let me give you an example of a killer persuasive analogy. It comes from that master of sophisticated rhetoric, Arnold Schwarzenegger.

Schwarzenegger is an advocate for renewable energy, both for California and the world at large. Given his celebrity status and prior political experience as Governor of California, he has quite the platform to share his views.

In 2015, Arnold published a piece on Facebook called I don’t give a **** if we agree about climate change. That provocative title set the stage for what could be called a “terminator” analogy, in the sense that it puts any intellectually honest person in an inescapable box that supports the conclusion Schwarzenegger wants you to arrive at.

First, Arnold says forget whatever you think about climate change. He goes so far as to say that climate change deniers can assume that they’re right.

He then turns to facts:

Then, Arnold turns to an analogy that illustrates his argument in a very personal way:

I want you to pick a door to open, and enter the room and shut the door behind you. You have to stay in the room you choose for one hour. You cannot turn off the engine. You do not get a gas mask.

I’m guessing you chose Door Number Two, with the electric car, right? Door Number One is a fatal choice — who would ever want to breathe those fumes?

This is the choice the world is making right now.”

Talk about putting someone in a box — literally. By sidestepping the controversy over climate change and making the outcome of exposure to fossil fuel emissions a matter of personal life or death, Arnold likely changed the minds of more than a few reasonable people.

Now, this is the internet. So, I’m sure some people simply refuse to be swayed no matter what, and some trolls probably said they’d rather choose the deadly Door Number One than do anything perceived as good for the environment.

Well, there is a way to set up a real-life demonstration of this analogy if anyone’s interested. 🙂

I shared Schwarzenegger’s analogy because it’s a brilliant example. But keep in mind that unlike with contentious social issues, your prospects want you to convince them.

If someone has a problem they want solved or a desire they want fulfilled, they want to find a solution. If they’re currently a part of your audience, they want you to be the solution.

The right analogy, at the right time, told the right way, may be exactly what they need to do business with you …

And there you have it.