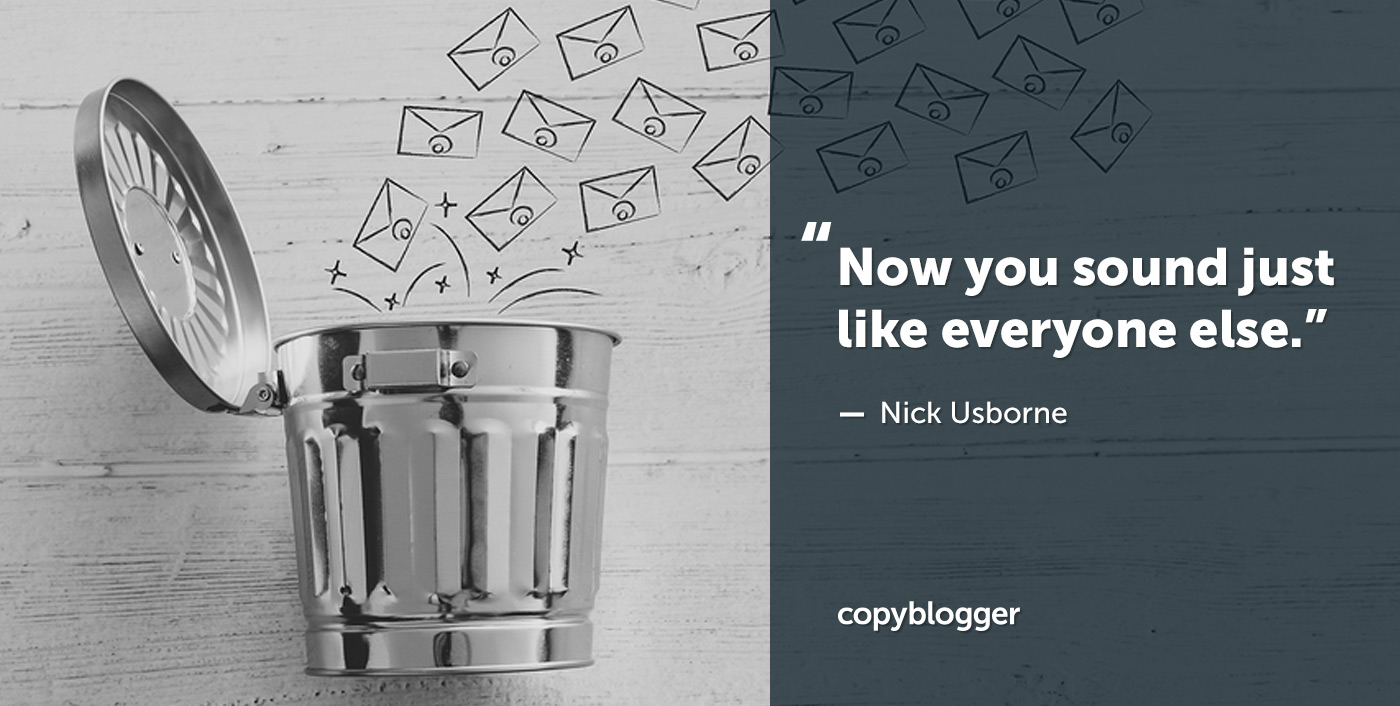 Pretty much every online business on the planet uses marketing automation in one way or another.

Honestly, it would be tough to run a business without it.

For example, if you were to sign up for my own newsletter, you’d receive a series of three welcome emails, one a day for three days.

It makes total sense for me to automate that. And the user experience for people who sign up for my emails isn’t compromised one little bit.

But … I’m a bit of a rarity. Because that’s pretty much as far as I go.

Companies large and small are jumping into marketing automation with both feet. They’re loving it. And maximizing its use in every way possible.

Every email you open …

Every web page you visit, even for a second …

You get tagged. You’re tracked. You become fodder to the algorithms that drive marketing automation.

But I’m biased for a good reason. I’m trying to defend the integrity of writing to your audience in a human voice.

You can write the best copy or content in the world, and then have it badly undermined by the technology that delivers it.

Mess up #1: Automation can make you sound creepy, and undermine trust

When she wants to buy lingerie or swimwear, my wife has a favorite website she buys from.

Recently she received an email from this company, featuring some items on sale.

She clicked through to the site, took a look around and left. Didn’t buy anything or even put anything in the shopping cart. Just browsed a few items.

And the subject line read: Caught you looking …

Seriously? They thought this would be viewed as a personalized experience? Cute, perhaps?

Nobody paused to consider this might instantly undermine her trust in the company?

Because that’s exactly what happened.

Just because the features of the automation system you’re using allow you to do certain things, doesn’t mean you should do them.

If you have even the tiniest suspicion that it might be a tad tone-deaf to send an email saying, “Caught you looking,” bounce the idea off some people who are not in your immediate team.

Get an outside perspective.

More generally, be aware that your prospects and customers are thinking more about privacy issues than they were even a couple of years ago.

And, like my wife, they’ll cut you off at the knees if they feel you’ve gone too far.

Mess up #2: Once-fresh copy grows stale without anyone noticing

I signed up for a newsletter a couple of months ago.

I then received a series of welcome emails, each designed to bring me one step closer to buying the company’s course on digital marketing.

Because the company specializes in digital marketing, I was surprised by something they said in one of their emails.

They told me I could use only 140 characters of text in a tweet. Oops. Twitter changed that limit to 280 characters back in late 2017.

In other words, that automated email sequence has been “in the can” for more than a year, and nobody had thought to update it.

Again, this is a fast way to undermine the trust of your readers.

There’s nothing creepy or bad about this example. It’s just an oversight that can be avoided.

Don’t “can it and forget it.” Set a schedule to go back and read all of your automated emails.

You may be embarrassed to discover some of them were written literally years ago and are in urgent need of an update or refresh.

Or maybe your voice as a business has evolved, and that new voice needs to be reflected in those old email sequences.

Mess up #3: Funnel fatigue sets in among your prospects

I’m sure you’ve had the experience of being stuck in a marketing funnel.

Maybe it begins with clicking on a Facebook ad …

Whatever the entry point, you’re now in the funnel.

Emails, landing pages, sign-up pages, more emails, and so on.

Again, nothing fundamentally wrong with that.

But when you move your prospects through one of these funnels, you’re doing exactly the same thing as most of your competitors.

Everyone is doing it, and for the most part they’re using the same marketing automation service providers.

And this means your audience has been exposed to the “funnel experience” a few times now.

They know how it goes.

They pretty much know what the next message is going to be about.

And they know when they’ll be hit with your breathless message of urgency or scarcity.

The process and rhythm of your cunning plan is familiar to them.

None of that is good.

The text may be conversational. You may sound like a “real human.”

But when you deliver your copy within the predictable structure of an automated sequence, that sense of humanity quickly evaporates.

Your brand takes a hit too.

Add something unexpected to every email sequence. A personal note. A reference to something that happened in the news yesterday.

Do the same with your social media channels. Particularly if those channels are automated too.

Throw in something timely. Respond to comments. Join the conversation!

You can use automation technology and also break the rhythm with some real human interaction to have a far better chance of holding your audience’s attention.

And don’t get me started on chatbots and AI

The kind of automation I’ve been writing about here is pretty old-school. No new tech required.

It would take a whole new post to start exploring the benefits and dangers of replacing human interaction with an AI-powered chatbot.

Why waste time paying real people to talk with your prospects and customers? Why not have a bot do it for you?

What could possibly go wrong?

If I do end up writing about the downside of using chatbots, I can imagine closing with some advice like this:

Computers are good at automating things. But humans are really good at being spontaneous, imperfect, unpredictable, and on a good day, inspirational.

Come to think of it, that’s not such a bad closing thought for this post too.

By all means, use marketing automation tools.

But don’t let the process undermine the power of great writing.

And make it a little messy.

That’s what we’re good at!

Previous article: The Light and Dark of ‘Tidying Up’ for Writers
Next article: Craft a Deliciously Effective Content Marketing Strategy with a Farm-to-Table Approach