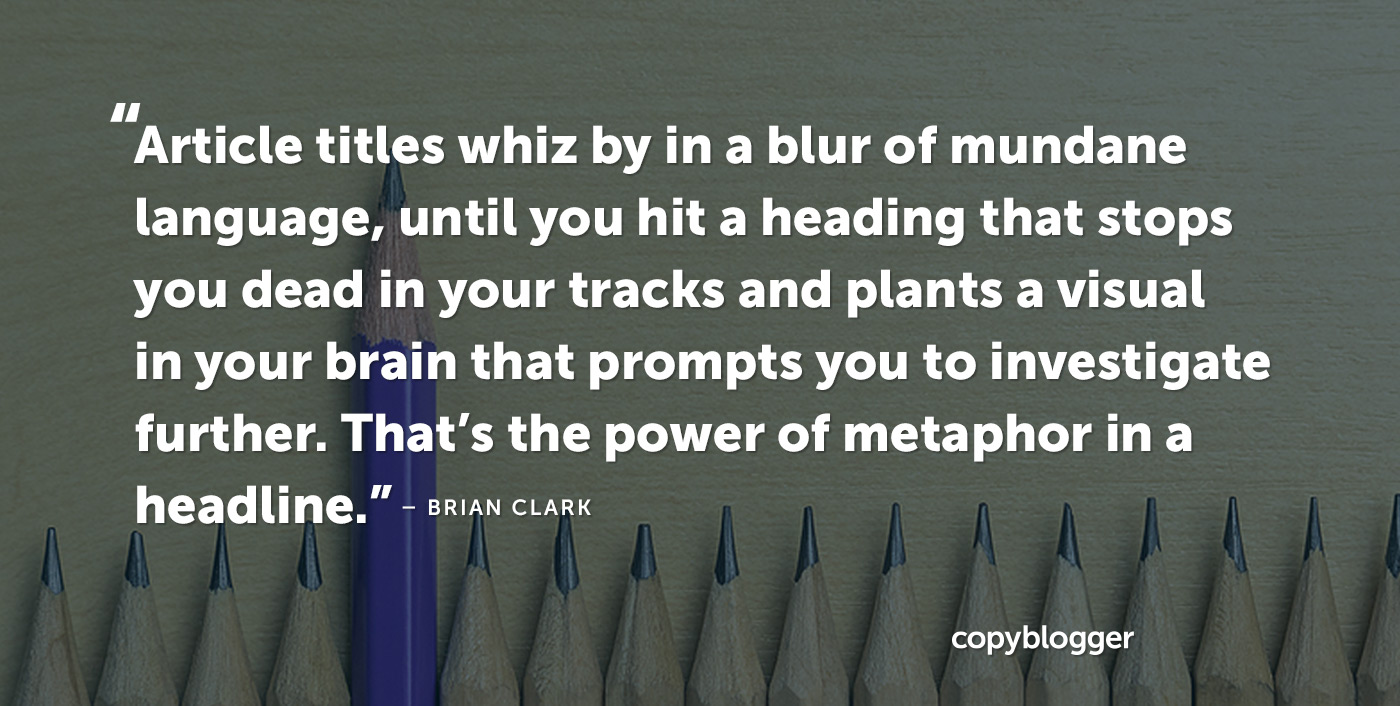 Hopefully I’ve sold you on the benefits of using metaphors when creating compelling content, and you know the differences between metaphors, similes, and analogies.

Now let’s take a look at five examples of how you can use metaphorical expressions to spice up your writing.

Metaphors can turbo-charge just about any element of an article, from the title down to the close. You might even design an entire piece of content around an ongoing metaphorical theme.

Imagine yourself blazing quickly through your news app or email inbox.

Article titles and subject lines whiz by in a blur of mundane language, until you hit a heading that stops you dead in your tracks and plants a visual in your brain that prompts you to investigate further.

That’s the power of metaphor in a headline.

For examples of titles that employ both metaphor and descriptive beneficial copy, one only has to look at best-selling business books:

Perhaps you avoided metaphor in your headline, but want to open strong by creating an engaging visual representation in the reader’s mind. Use a metaphor to suck people into the body of your content.

Here’s an example from Anne Miller’s Metaphorically Selling that begins an examination of the dot com bust and resulting economic downturn:

“In Arizona there’s an old graveyard known as Boot Hill where lots of slow-on-the-draw gunslingers are buried. One of the headstones reads ‘I knew this was going to happen, but not so soon.’

“The same could be said about the U.S. economy, which has gone through a wrenching contraction. I don’t know anyone who thought the hyperbole of 2000 could last, but no one thought things would drop as fast as they did.”

In Stefanie’s post, How to Write 16 Knockout Articles When You Only Have One Wimpy Idea, she uses multiple metaphors to compare creating winning content over time to training to be a boxing champ.

You can see how a theme was created around a simile in Weak Email Marketing and Nickelback Have Less in Common than You Might Think.

You know that you should back up your beneficial promises and assertions with hard data and specific facts when attempting to persuade.

Nothing speaks louder than the numbers, and yet the full force and effect of those numbers is often lost on the reader. Metaphors make the numbers relevant, concrete, and memorable.

Metaphors make for great closers because, when well constructed, they provide powerful summaries and clear recommendations.

If applicable, you can follow up with a specific call to action that tells your reader what to do next.

Copyblogger gives you words that work to magnetically pull the needles you want out of the mass market haystack.

Previous article: How to Build an Audience in 2020 (and Beyond)
Next article: It’s Creativity Month on Copyblogger