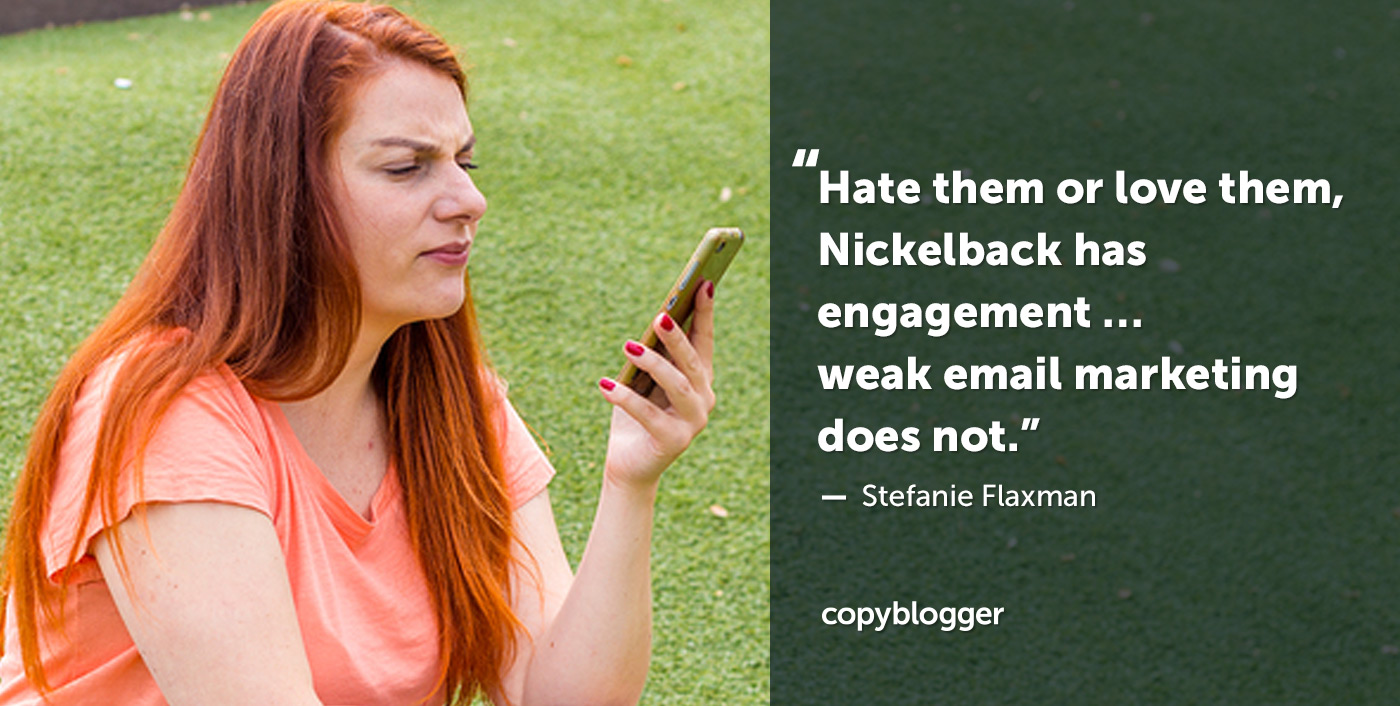 I’ve never admitted this to anyone before:

I don’t always change the radio station right away when a Nickelback song comes on.

Here’s about how far I’ll let “How You Remind Me” play before finding something else to listen to:

(And if you also couldn’t cut it as a poor man stealing, make sure to check out Sonia Simone’s classic post about developing effective, non-sleazy selling skills.)

Personally, I don’t get the big hate-fuss. When I don’t like something, I just ignore it.

Nonetheless, if Nickelback is the butt of a joke during a conversation, you’ll find me laughing and making facial expressions of disapproval about the music.

So, when a radio station plays “How You Remind Me,” I’m always a little shocked, which prevents me from immediately turning it off.

Why is this song still in the DJ’s rotation? Don’t they know it’s Nickelback?

It’s just like weak email marketing … the public disapproves of it, but it persists.

After patting myself on the back for a moment about that comparison, I realized my logic wasn’t accurate.

Let’s start with the lesser-known worldview (at least from my experience).

They are, indeed, a popular band that has fans.

Then, of course, the widely known worldview among anyone who prides themselves on liking good music is … Nickelback is pathetic.

A plethora of references in pop culture make fun of the band.

For example, the mattress company Purple uses this copy in an ad for their mattress protector:

“Other protectors turn your bed crinkly or stiff. And they make your mattress noisy, hot, and uncomfortable … like a Nickelback concert …”

Another form of Nickelback-hate happened in 2011, when the band was announced as the halftime show for the Detroit Lions’s Thanksgiving Day game.

One Lions fan started an online petition to book another artist instead.

In light of that event, and since art often inspires other art, musician Scott Bradlee arranged and recorded a Motown cover of “How You Remind Me.”

That track became part of Bradlee’s album A Motown Tribute to Nickelback, which helped his project Postmodern Jukebox gain popularity in 2012.

The Postmodern Jukebox YouTube channel now has more than four-million subscribers — and more than a billion views. Yes, the B-word.

In 2016, Adweek featured Bradlee as one of “20 Content Creators Who Are Setting the Bar for Creativity.”

No one pays attention to weak email marketing.

It doesn’t have any fans and it’s not influential.

It doesn’t help a marketer reach her goals. It makes recipients cranky. It’s both ineffective and a burden.

Smart marketers know what their audiences truly want and deliver valuable treasures to their inboxes. Think free educational courses, special offers, or both.

The relevant, timely content is just as enjoyable for the creator to craft as it is for the recipient to read.

Are we having fun yet?

Stefanie Flaxman is Copyblogger’s Editor-in-Chief. Check out her masterpiece blogging series on YouTube.

Previous article: How Strategic Content Converts to Email Subscriptions
Next article: How to Get (and Keep) Clients in Uncertain Times, Featuring Leah Neaderthal