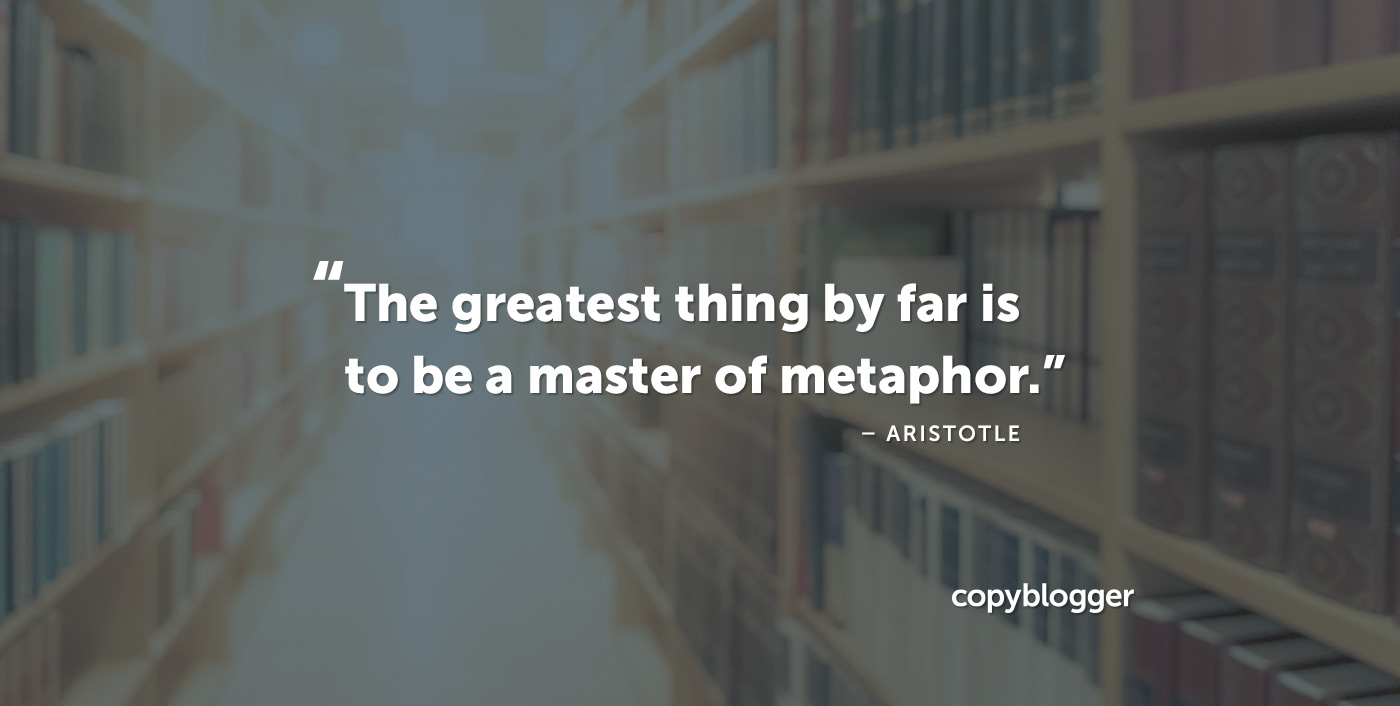 “The greatest thing by far is to be a master of metaphor.”
– Aristotle

Aristotle and countless other masterful communicators have harnessed the power of metaphor to effectively persuade and inform.

Metaphors allow you to make the complex simple and the controversial palatable.

Conversely, metaphors allow you to create extraordinary meaning out of the seemingly mundane.

People often associate metaphor with poetry, literature, and art, but we all use metaphor in our day-to-day conversation, often without realizing it.

Because they are so effective at instantly communicating both tangible and conceptual information, metaphorical expressions are woven throughout the fabric of the English language.

While metaphor is pervasive in our everyday discourse, the strategic use of metaphorical expression can be one of the most persuasive techniques in your linguistic toolbox.

Simply altering a single word, phrase, or story can make the difference between the success and failure of an argument or presentation.

In her book Metaphorically Selling, Anne Miller recounts the tale of the 1980 Congressional grant of $1.2 billion in loan guarantees to the then-failing Chrysler Corporation.

To avoid the bankruptcy of Chrysler and the inevitable loss of thousands of jobs, Lee Iacocca went to Washington looking for a bailout.

Of course, a bailout was the last thing Congress was interested in providing at that point. Iacocca reframed the request using the vivid metaphor of a “safety net” that would prevent a significant percentage of American citizens from falling into economic turmoil.

With that one simple phrase, Iacocca turned the perception of the loans away from a potential blight on taxpayers, and toward an exercise in responsible government.

Metaphors are so powerful because of one simple fact of human psychology: We react more readily to the emotional than the rational.

Thanks to the differences between the two hemispheres of our brains, what catches our attention and sticks with us is what we see and feel via our right brain.

After that, the rational left hemisphere can be engaged by the relational nature of the metaphorical information itself.

Put another way, visual words work better than words lacking in imagery when it comes to effective communication, as long as they also satisfy our left brain by being something we can logically relate to.

Iacocca substituted the concept of the “safety net” in lieu of the inevitable “bailout” stigma in order to invoke a strong image in the mind, which also coincided with many people’s view of the purpose of responsible government.

The “safety net” visual reframed the issue, thereby allowing the members of Congress to logically justify the loan guarantees not as a corporate favor, but as the duty of a sound governing body.

How to market metaphorically

Crafting great metaphors takes time and thought, even for the most proficient of wordsmiths.

Stay tuned to Copyblogger, becauase after we’re through with this upcoming series of articles, I’m convinced that anyone will be able to harness the power of metaphor to become a stronger content marketer, even if your vocabulary is as bad as, like, whatever. 🙂

Next in the series:

5 Smart Ways to Use Metaphors to Create Irresistible Content

The Persuasive Power of Analogy