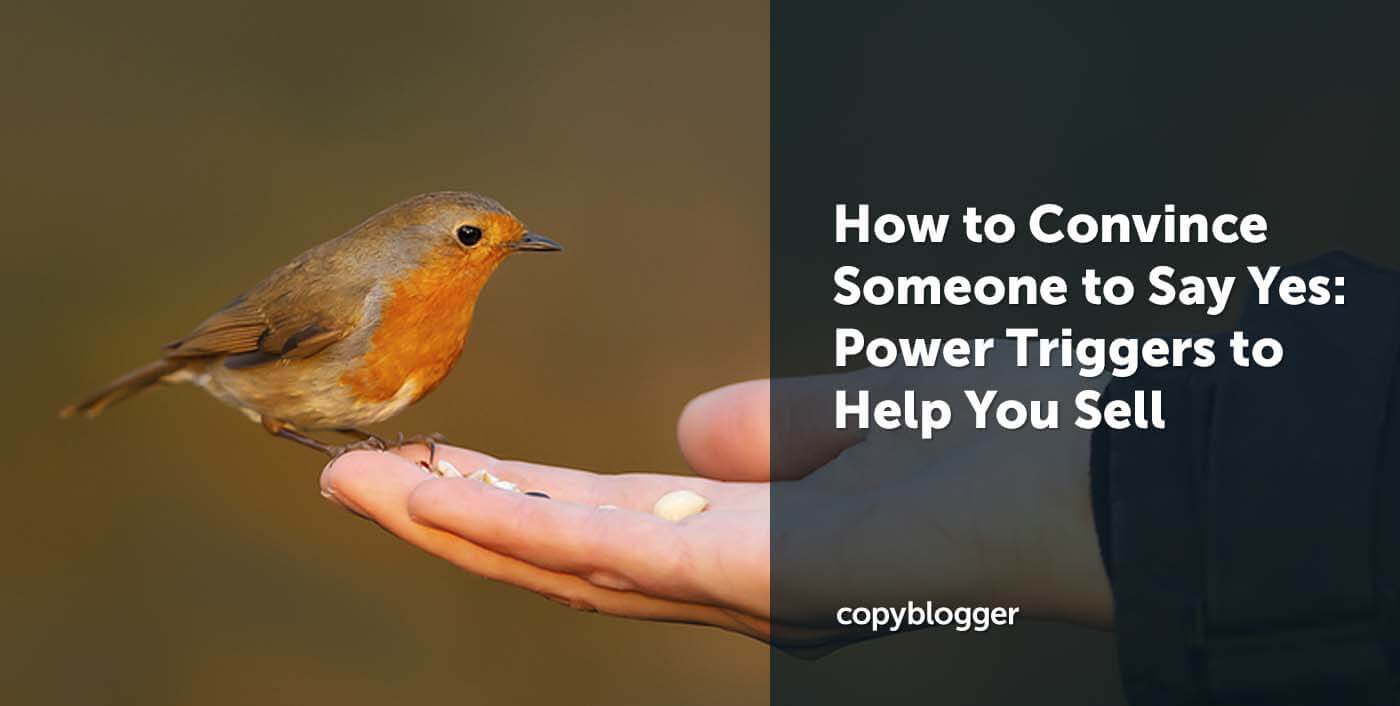 How to convince someone to say “yes” is the goal for any sales message. It’s what psychologists call “compliance.”

However, my first exposure to the idea of compliance was not in a psychology book about persuasive words, but beneath a tree decades ago when my grandfather, in a moment of playfulness, showed me something startling with a stick and a few red feathers.

One day, he handed me a long stick with a clump of red feathers taped to the end and said he wanted to show me something. He had a familiar, mischievous look in his eye, so I knew it would be fun.

In a tree near his tool shed, a family of robins had nested. We slowly and quietly worked our way to just beneath the tree, and my grandfather told me to raise the feather end of the stick up to the nest.

Nearby, a male red-breasted robin stood guard. When he saw the red feathers, he immediately attacked them, chirping wildly and flapping his wings in distress. I was dumbfounded.

Between chuckles, my grandfather explained that red feathers made the bird go berserk. I asked why, and he told me he wasn’t sure, but figured that the bird thought the feathers were another robin. He said robins protect their territory and will attack another robin on sight.

The magic of fixed action patterns

This is an example of what scientists call “fixed-action patterns” in animals. A fixed action pattern is a precise and predictable sequence of behavior. It’s an instinctive, automatic response that’s useful when you need to know how to convince someone to say “yes.” This sequence is set in motion by a specific “trigger.”

Fixed-action patterns are common among animals. But what about humans? What if you could use a trigger to set off a desirable sequence of behavior in a potential customer — like saying “yes” to a request you make? So you don’t feel like you have to write the greatest sales letter of all time?

In Influence: The Psychology of Persuasion, Robert B. Cialdini, a respected social scientist and specialist in the area of compliance psychology, says that “… automatic, stereotyped behavior is prevalent in much of human action …”

He cites an experiment by Harvard social psychologist Ellen Langer, where you can see this concept in action. Langer approached people waiting in line to use a copy machine and asked, “Excuse me, I have five pages. May I use the Xerox machine?” About 60% said “yes.”

Under similar circumstances, she did the same thing, but instead asked, “Excuse me, I have five pages. May I use the Xerox machine because I have to make some copies?” In this case, an overwhelming 93% said “yes.”

What happened to increase the “yes” response so dramatically?

It’s a well-known principle that people like to have a reason, perhaps to avoid being naive. A reason helps people make a decision and justify their action. However, in this experiment, “because I have to make some copies” does not provide any new information. It does not actually give a reason.

“Because” is usually followed by information and has become, for most people, a “trigger.” Once the trigger is learned, it is powerful enough to set in motion a behavior sequence, in this case a “yes” response, even in the absence of concrete information.

It’s easy to see the importance of fixed-action patterns in sales techniques. All we need to know is where to find the “stick and red feathers” that can generate a “yes” response in a variety of selling situations.

Here are seven common compliance triggers identified by psychologists along with my suggestions for applying them to writing copy.

There is an overwhelming urge to repay debts, to do something in return when something is done for us. This deep-seated urge is so strong, noted paleontologist Richard Leaky has said that it is the very essence of what it means to be human. Sociologist Alvin Gouldner points out that no society on Earth escapes the reciprocity principle.

Application: Give people something for free. Whoever is on the receiving end of your gift is then in your debt. What can you give? Anything: a free book, planning kit, sample, subscription, catalog, special report, or virtually anything else that’s related to your product or service, as long as it’s free. The urge to “repay” can then lead people to make a purchase.

When you’re learning how to convince someone to say “yes,” the key is to get the initial commitment, which can appear small, reasonable, and innocent. This commitment can not only lead to compliance via the principle of consistency, but also to further compliance for larger requests.

Application: Ask for a little “yes” first, then build on that. Sales people sometimes call this the “foot-in-the-door” technique. Begin by asking your prospect to agree to a simple request, such as making a small transaction or completing a simple questionnaire.

By getting people to make a decision, take a stand, or perform an action, you establish a new psychological “commitment.” Once you have that commitment, no matter how small, you can build on this small commitment and make ever-increasing requests.

Most of us are imitators in most of what we do. We look to others for guidance, especially when we are uncertain about something. We ask, “What do others think about this? What do others feel? What do others do?” Then we act accordingly, all thanks to the power of social proof.

Application: Show others using your services or buying your products. List testimonials of satisfied customers or clients. Feature stories of those who have been “converted” from another service. Show pictures of people using your product. Provide case stories from some of your best customers. When people see that what you offer is okay with other people, they are more likely to give it a try themselves.

No matter how reasonable we may think ourselves to be, we are always more likely to say “yes” to those we know and like. We readily comply with requests from those who are similar to us and for whom we have good feelings. It’s what makes refusing to buy Girl Scout Cookies from a friend’s child next to impossible.

Application: Be personal and likable. This is one element of selling that most people know instinctively, but often fail to put into action. Getting people to like you in person is one thing. But how do you do it in writing when people usually have no chance to meet you?

Reveal yourself. Show your feelings. Tell a story that prospects can relate to. Use flattery and praise. Present your sales message in such a way that you are not just selling something but working with others as an ally with common problems, concerns, and goals.

In this age of specialization, we are more prone to respond to authority than ever before. Regardless of an independent spirit, we look to experts or those we perceive to be experts to give us the answers and show us the way.

Even the mere symbols of authority, such as titles and specialized clothing, are enough to trigger a response that’s part of how to convince someone to say “yes.” For instance, note how seeing someone with a white smock and stethoscope instantly suggests “doctor” and makes anything that person says about medicine seem more authoritative.

Application: Provide signs and symbols of expertise. Establish your expertise by providing solid information. Show your credentials. Build trust by admitting flaws or shortcomings and demonstrating a lack of bias. Show similarities between you and your prospect or customer. Cite awards, reviews, speaking engagements, and books you’ve authored.

You can also “borrow” authority by associating yourself with those who have authority. For instance, show a photograph of yourself with someone your prospects will consider an authority.

In general, the fear of loss is more powerful than the hope of gain. By properly engaging the instinctive tendency to avoid losing something — or avoid losing the chance to possess something desirable — you can trigger a “yes” response with scarcity (available for a limited time only).

Application: Create time limits and limited availability. A “reply by” date is one of the most powerful ways to create scarcity. You can do this with a specific deadline or expiration date. If you can’t be specific about the date, use a general deadline, such as “reply within the next 10 days.”

Use limited availability by mentioning how fast your supply is selling or citing the actual number of items that remain. You can also put constraints on supply, such as limiting memberships to the first 500 or creating a limited edition with X number being produced.

Personalized shopping experiences are no longer the future — they’re here. When you customize your prospect’s experience, they start to envision themselves with your product or service before they purchase anything. Sounds like a no-brainer when it comes to how to convince someone to say “yes,” right?

A personal touch is equally as important when you’re forming new relationships with clients, editors, or supervisors. People who get along professionally agree on smart solutions and solve problems fast.

Application: Besides addressing prospects with their names whenever possible and tailoring their experiences on your website, make your writing personal, but not self-indulgent. When pitching guest post or collaboration ideas, do your homework before cold-emailing someone. Send an email they’d truly enjoy reading, rather than a generic message that’s easy to toss in the digital trash.

The power of the “but you are free” technique

And let’s not forget that the sales environment has shifted away from “buyer beware.” Customers now have more power than ever to research the best products, as well as the best deals and discounts. So, to compete, you have to offer them something they truly can’t find elsewhere.

And no one wants to be pressured. That’s why the “but you are free” technique is a classy and effective tool when making a suggestion. It’s your job to present a winning copywriting offer; it’s your prospect’s job to decide whether or not they want to accept the offer.

How to convince someone to say “yes” is often as simple as giving them the freedom to say “no.”