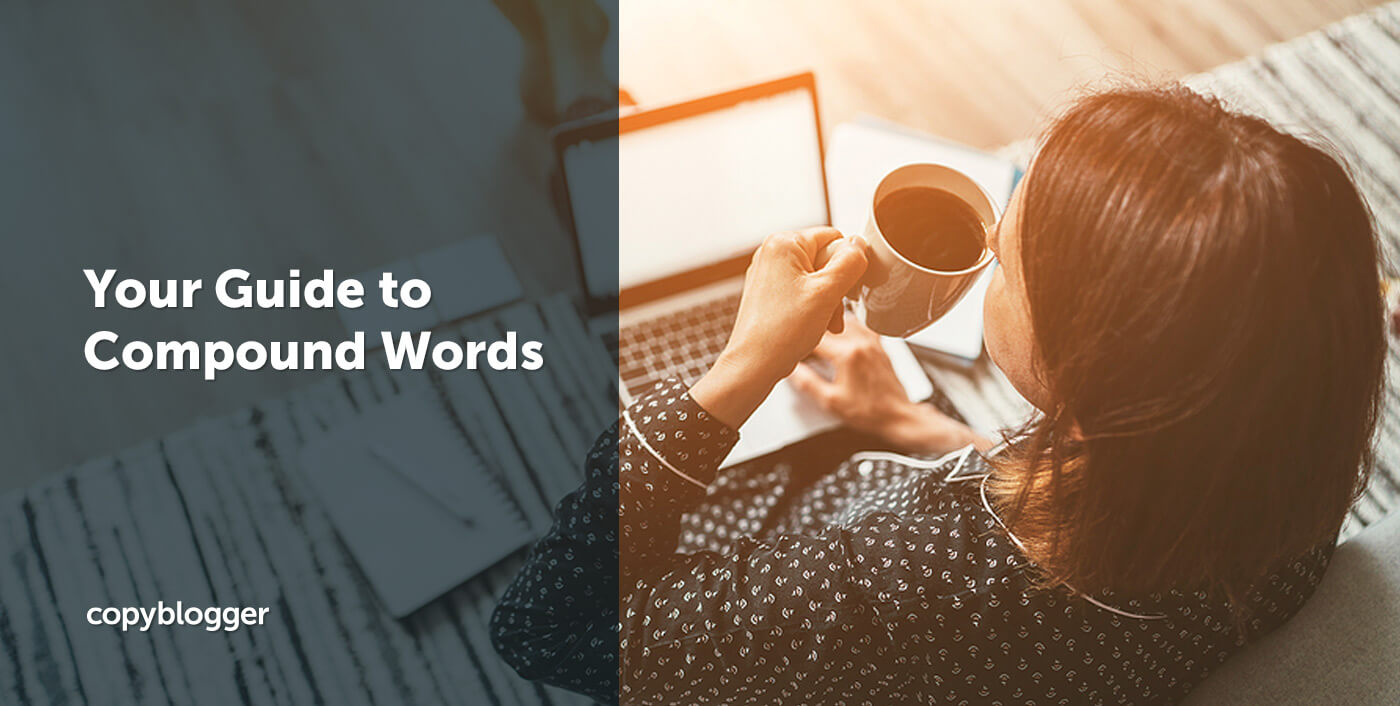 Here’s the thing about the English language, in general, that’s not just specific to compound words: It’s full of pitfalls — simple errors that can alienate readers, turn off subscribers, and annoy buyers.

That’s why Copyblogger has historically put a heavy emphasis on avoiding incorrect spelling and usage, such as these 11 common grammar mistakes.

And when you’ve been doing this as long as we have, you’re going to discover even more common errors. The most recent for me, though, has been a host of compounds.

“What is a compound word?” you ask … let me show you what I mean.

What is a compound word?

A compound word is simply a word that is formed from two or more other words. Typically, the new combination of words creates a new or broader meaning.

Compound words often produce writing mistakes because it’s easy to forget if they’re spelled as one word or two words. If they aren’t double-checked (see what I did there?) by an editor, they can lead to glaring errors.

If we take a look at each one, you’ll not only be better positioned to spot a compound word in the future, you’ll also cut down on spelling mistakes.

I think the open variety are the most tricky to spot. A key characteristic of this type is that they’re two separate words frequently used together.

Since they’re two separate words, it can be confusing to identify them. However, you know they’re compound words because they need to be written in a specific order to achieve a specific meaning.

Each separate word is a noun, but the combination creates more descriptive language.

They combine two nouns into a single word to create a compound word with a different definition.

Notice how each word is a standard word that can be broken down into two separate words. A compound word isn’t a blend of two words, such as a portmanteau.

Hyphenated compound words can be easily confused with open ones. Sometimes, a writer will hyphenate words when they should be separated with a space, or vice versa.

Seasoned writers know that whenever they hyphenate a word, they should look up the meaning and spelling to verify that their choice to hyphenate is accurate. Especially because some hyphenated compounds are hyphenated when used as an adjective but not hyphenated if they’re placed after nouns.

Still not convinced you should double-check? Keep reading …

If you’re ready to break the bad habit of letting compound word mistakes run rampant in your writing, review these common slip ups that can trip up your reader.

It doesn’t take much extra time to make sure your content isn’t tarnished with careless errors.

But, as Cobain knew, that’s grammatically incorrect — to a degree. See, the compound word nevermind is actually an old-fashioned way of saying “notice” or “pay attention,” but used in a negative style:

You’ll do well to pay Cobain no nevermind.

You’ll never need to use “no nevermind” in a sentence, since “pay attention” or “notice” will work better. But do use the two-word variation when you mean “please ignore.”

Never mind what I just said.

A lot vs. alot

Brian rocks out a lot when he listens to Nevermind.

“Alot,” on the other hand, isn’t a word, so you shouldn’t use it. Ever. People will laugh at you.

By the way, don’t confuse “a lot” with “allot,” which means to distribute or give out.

I will allot four donuts to each of you. That’s a lot of donuts.

All together vs. altogether

One means “as a group,” while the other means “completely” or “entirely.”

He stacked the records all together, and the collection amounted altogether to four hundred.

Every day vs. everyday

The single word can be used as a noun or adjective. It expresses the routine, the commonplace.

The two word phrase, however, expresses duration or time.

He listens to Nevermind every day on his everyday record player.

All right vs. alright

This one is a little tricky because they both mean the same thing: okay, very well, satisfactory, certainty, or safe.

I’m all right if you’re alright.

However, the single word is informal, which is why you’ll get the red squiggly lines in WordPress or Microsoft Word if you try to use it. The preferred use is two words, all right? Better yet, to avoid reader confusion, be specific:

Are you safe? Is that paper satisfactory?

Anytime vs. any time

Here’s another one that’s quite subtle.

We’re talking about the difference between “at any time” (whenever) and just “any time.”

If you’re going for the meaning “at any time,” use the adverb anytime. If you only mean to use the words “any time,” keep the words separate.

The most common mistake here is writing “at anytime,” since the meaning of the adverb already includes “at.” The correct version is “at any time.“

A while vs. awhile

Can you spot the common mistake? It’s when a writer uses “stay for awhile,” instead of “stay for a while,” because the meaning of the adverb awhile already includes “for.”

Sometime vs. some time

Sometime is another adverb. It’s used to communicate an unknown amount of time or unspecified time in the future. The two words “some time” (an adjective and a noun) communicate a period of time, usually a long one.

It’s the difference between “let’s get together sometime” and “it’s been some time since the old friends have spoken.”

Wondering if a certain word is compound?

Check out these common questions and use the skills you’ve learned so far to dissect them — then see if you’ve guessed the correct answer!

Is because a compound word?

Is around a compound word?

“Around” doesn’t look compound at first glance, but if we dig a little deeper, you’ll see it’s made up of the words “a” and “round.” Since the word is formed from two existing words to create a new meaning, it’s a compound word.

Is together a compound word?

“Together” is technically a compound word because it’s made up of three existing words — “to,” “get,” and “her.” However, this closed compound word is different from others that derive their meaning from the words that are combined, such as “breakfast” or “birthday.”

Is before a compound word?

“Before” is a compound word because, like the word “because,” it’s made up of the two words “be” and “fore.” “Fore” might not be a commonly used word today, but it is a word that means “placed in front.” So, it’s a closed compound word.

Is strawberry a compound word?

“Strawberry” is a compound word that consists of the two words “straw” and “berry.” It’s a good example of how two nouns can form a compound word. “Straw” isn’t an adjective that describes the berry itself. However, “blueberry” and “blackberry” are both compound words.

Is butterfly a compound word?

The last of our frequently asked questions is a beautiful one to picture. Yes, “butterfly” is a compound word made up of the words “butter” and “fly.” It’s a closed compound word because in order to achieve the proper meaning of the noun, the two words function together without a space.

Now let me introduce you to a special set that changes in meaning and shape when they are used as a verb, adjective, or noun … and can cause all kinds of problems.

The compound usually serves as an adjective:

Or the compound can serve as a noun:

You might wonder why we flip out over stress the importance of accurate grammar and usage. Well, there are a couple of reasons …

Sharpening the saw in the small stuff is a healthy habit for writers … no matter how long they’ve been in the business.

So, any time you think you might be using a word incorrectly, look it up. You’ll keep people from laughing at you, and get a little smarter in the process.

Previous article: How to Convince Someone to Say Yes: 7 Power Triggers to Help You Sell
Next article: A Low-Tech Content Calendar to Plan, Organize, and Share Your Ideas