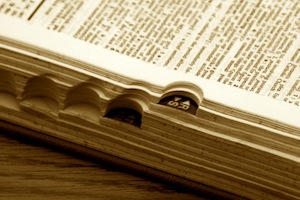 When it comes to assembling persuasive copy, like any other construction job, you need to rely on your skills, experience, and toolbox.

The toolbox of the writer is filled with words.

In defining what I believe is a critical element of crafting effective copy, I’ll make my case by amending the famous quote from Animal Farm: “All words are equal, but some words are more equal than others.”

And there are certain power words that hold more sway over our decision making process than others. You might be surprised to find that these “power words” don’t seem … well, all that powerful.

This speaks to just how damned efficient they are. Simple language is crystal-clear language, and these words make it clear just what you want your reader to do.

And you might be surprised just how effective these deceptively simple words can be.

I’ve listed these words below (along with studies related to their power) that will show you how to speak more persuasively to your audience.

Warning: I can’t stress enough — just as in the application of writing headlines that work — you must understand why these words are persuasive, and you must use them in the contexts that make sense for your audience and your business. If you just start slapping them on every piece of content you create for no apparent reason, you’ll quickly see just how unpersuasive they can be.

There, you’ve been warned. Now, let’s get on with the show …

There’s an often-cited study in the copywriting world about a piece of Yale research that reveals “You” to be the #1 power word out of a supposed 12.

Despite the fact that the study likely never happened, I have some actual research that reveals the power of invoking the self.

As it turns out, while people might like the word “you,” it is guaranteed that that they love reading their own name much more.

According to recent research examining brain activation, few things light us up quite like seeing our own names in print or on the screen. Our names are intrinsically tied to our self-perception and make up a massive part of our identity. No surprise then, that we become more engaged and even more trusting of a message in which our name appears.

Research has shown that we will gladly pay more for personalization, so isn’t it about time you start getting personal with your customers?

However, there is one small problem with this finding …

Writing general web copy with name utilization in mind isn’t usually possible, but by capitalizing on the power of permission marketing, you can adapt this strategy easily — many email lists are greatly aided by being able to start off messages with a customer’s name.

While that may not be important for your blog updates, if you maintain a variety of separate lists for your products (and you should), make sure you’re grabbing a first name to make your broadcasts trigger that personal aspect with customers.

People love free stuff so much they’ll actually make different choices, even when the respective value of the item or service remains the same.

Dan Ariely revealed this startling fact in his book Predictably Irrational, where he examined a very unusual “battle” between Lindt chocolate truffles and Hershey Kisses.

To test the power of the word “free” in relation to concrete value, the study first asked people to choose between a 1 cent Hershey Kiss or a 15 cent Lindt truffle (about half its actual value, generally considered a richer, superior chocolate).

The results were as follows: 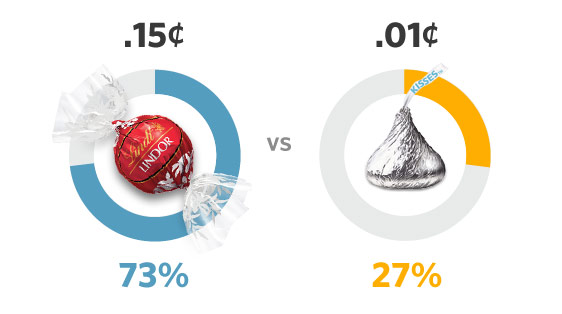 In other words, tastes were found to be very much in favor for the truffle. I mean, who’s going to pass up a deal, right?

Later though, another random group of subjects seemingly flipped on their opinion of these two treats. Ariely revealed that when the price was reduced by one cent for both brands (meaning the Kiss was now free), people altered their choices drastically.

With the new prices, here were the results: 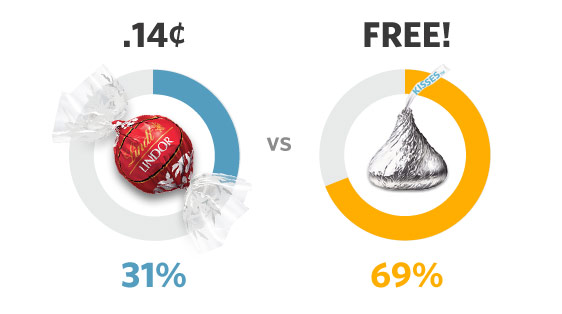 Although in the first test it appears we simply can’t pass up a deal, as it turns out, we really can’t pass up a steal. Although the relation in prices remained the same (a 14 cent difference between the two), people chose the Kiss far more often when it was free.

Ariely points to loss aversion (our disdain for losing out on things) and our natural instinct to go after “low hanging fruit” as the reasons why we are so susceptible to snatching up free stuff.

The danger of free: As we’ve seen here, there is a certain inherent danger in trumpeting free things. Having something for free will attract more people. But that will most certainly include a fair share of “bargain hunters” who aren’t likely to turn into the superstar customers that really grow your business.

Use free only when it makes sense, and only in the right context.

Emphasizing the “freeness” of your free guides, courses, information, support, etc., can go a long way in attracting attention. On Sparring Mind, I emphasize the fact that my newsletter is “free to join,” because although most marketers understand this, many folks don’t quite understand what it means to subscribe.

Conversely, you should use minimal pricing to keep out those barnacle customers who aren’t ideal long-term buyers, or who aren’t truly suited for your flagship offerings.

In a study from the classic book Influence by Robert Cialdini, tests were conducted on requests from a person in a hurry to use an in-office copy machine. The tests examined how different requests might affect people’s willingness to allow this person to “cut” in line.

In the first test, the participant simply stated:

Excuse me, I have 5 pages. May I use the Xerox machine?

In this scenario, around 60% of people allowed him to cut in line and use the machine first.

In the next scenario, the request was slightly tweaked. This time the participant said:

I have 5 pages. May I use the Xerox machine, because I am in a rush?

Did you see the ever-so-subtle difference between the two?

Let’s break this down: Not only was the request only minimally changed, but the “because” (his reason) was barely a reason at all! “Because I’m in a rush” wouldn’t stand up as a good excuse for most of us, right? Isn’t a majority of the working world in a rush?

Despite what we might like to believe, around 94% of people allowed him to cut in line this time! If you think that’s strange, check out the request used in the 3rd and final test:

Excuse me, I have 5 pages. May I use the Xerox machine because I have to make copies?

That went from having a barely passable reason to absolutely no reason at all for letting the man cut. In spite of this, 93% of people let him cut on this third trial, only a 1% drop from when he had a weak reason (“I’m in a rush”) and a 33% improvement vs. the first test.

A well-known principle of human behavior says that when we ask someone to do us a favor we will be more successful if we provide a reason. People simply like to have reasons for what they do.

Here’s the bottom line: Many companies are proud of the features that their product (or service) can offer, and that’s fine, but you have to remember that when you are focusing on writing persuasive copy, it all comes down to answering your customer’s #1 question:

What’s in it for me?

Although “because” may appear to have some sort of brainwashing effect on people at Xerox machines, it’s only really a matter of reasoning: even giving weak reasons have been shown to be more persuasive than giving no reason at all.

Only trumpet features and product traits you are proud of when they help make your point. Use them to create an incentive for customers to take action. And use “because” when pointing out these compelling reasons, but don’t rely on it as a crutch.

The subject of delayed gratification is an important one among neuroscientists, as many famous studies (such as the Stanford marshmallow experiment) showcase how being able to delay rewards to a later date is a skill needed to become successful. (I know very few entrepreneurs who would argue against that.)

Several MRI studies have shown just how fired up our mid-brain gets when we envision instant rewards, and how it’s our frontal cortex that’s activated when it comes to waiting for something (that’s a no-no for sales).

Words like “instant,” “immediately,” or even”fast” are triggers for flipping the switch on that mid-brain activity.

If you are in the business of selling web-based software, you already have an advantage here: “instant access” isn’t a vague promise, it’s often the reality. For those in the physical products or services business, reminding customers that they will receive their product quickly (or someone will get in touch with them ASAP) can go a long way in being the gentle push they need to buy.

We’ve seen how even “tightwad customers” can be swayed with these subtle changes in language to insinuate fast pain removal. It’s a reliable tactic for converting more prospects into customers as long as you follow the one golden rule …

Always deliver on your promises. And, whenever possible, overdeliver.

This is an area where many business get too optimistic, and although it’s smart to emphasis these instant rewards, it’s also always a good idea to under-promise and over-deliver, so be sure you can actually follow through on your promises or you may end up with a “tribe” that hates your guts.

This one almost seems paradoxical.

According neuroimaging research, we actually respond more favorably to recognized brands, and can have a hefty amount of disdain for any drastic changes. (Remember New Coke? Oh, the horror …)

On the other hand, it’s long been known that novelty plays an incredibly important role in activating our brain’s reward center and in keeping us content with our products.

“Newness” is important to products, especially because research has shown that they age far more quickly than “experiential” purchases. (In other words, you’ll hate your new headphones in 2 years, but that concert you went to 5 years ago probably aged in your mind like a fine wine.)

How can you achieve a zen-like balance against these two contradictory sides of the same word?

The important things to consider here are which parts of your business generate trust, and which parts generate utility. It’s your brand that creates trust, and as the saying goes, if it ain’t broke, don’t fix it.

Your products however are what customers get utility out of, and stagnant offerings are your first class ticket to an abysmally bored userbase.

Your core brand elements like your unique selling proposition, your dazzling customer service and your quality offering in the marketplace should be approached with excessive caution if things are going well.

With your products, it’s far easier to excite customers with new features and polish. Even if things don’t work out perfectly, a majority of customers will appreciate innovation attempts over no progression at all (unless you pull a Digg v4 and ruin everything in one fell swoop).

New fixes to old problems, new features and improvements, a fresh new design, or even new ways of getting your message out there (Red Bull anyone?) are all essential for keeping your customers “on their toes,” without losing the trust that has cemented you as an awesome brand in their mind.

Here’s what to do next:

Thanks for reading, and I’ll see you in the comments!

Join our Copywriting Interest List
Get updates on new copywriting resources, and be the first to know when our Persuasive Copywriting 101 class opens again.