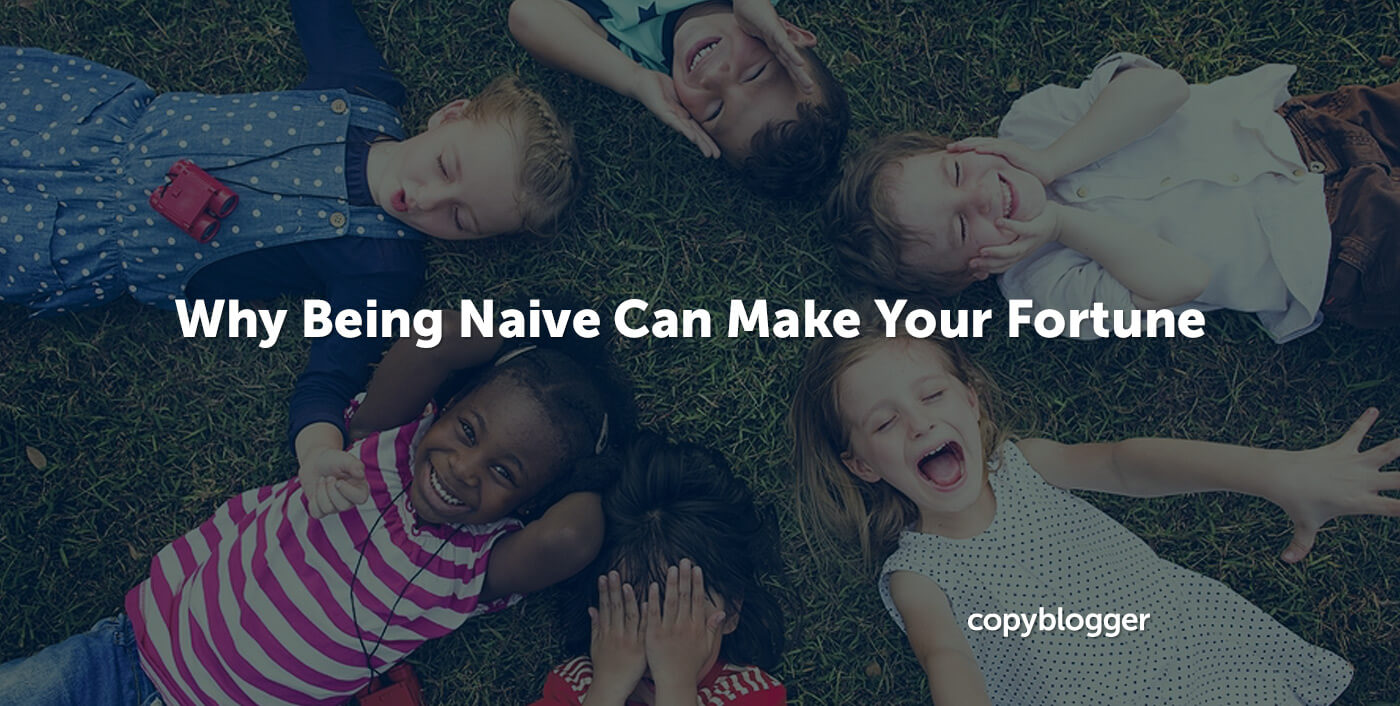 Back when I worked in the corporate world, I used to get called naive at least once a week.

My writing lightened up the stiff, lawyer-crafted language we used with our customers. Naive.

I was even dumb enough to occasionally tell the truth at meetings so we had some chance of fixing business-threatening problems. Naive.

Tsk, tsk, tsk. Such a bright girl, but I clearly had no head at all for business.

So I took off on my own.

Smack in the middle of an ugly international financial crisis, I “took the risk” of going without guaranteed income and making a living online. I tied my financial fortunes to my own efforts, rather than to the wisdom of senior executives and a prestigious board of directors.

(The real risk, of course, was that I’d be thrown in jail for multiple homicide. In comparison to that, self-employment looked like the safest bet.)

It’s worked out pretty well so far. But it seems that every year offers new possibilities for relationship building and opportunities to work on bigger things. And from time to time, I find it useful to revisit some of my naive ideas from my corporate days.

Because I still believe that being naive is one of the best ways to make a company great — whether that company is made up of one person or 10,000.

Signs of a naive person

Traditionally, being naive is associated with assertions or behaviors that display a person’s inexperience in a particular field or subject. A lack of sophistication and strict adherence to ideals are also signs of a naive person.

Can you see that, when it comes to creative business, naiveté might not necessarily be a negative quality?

In fact, it might be the exact quality that helps someone see opportunities, write better headlines, and use ethical sales techniques that other, more “experienced” people overlook or ignore — the winning differences that propel great innovations, great branding, and great marketing.

I first read Ben and Roz Zander’s extraordinary book The Art of Possibility around the time when I started my first business. I’ve read it many times since then, and I always take away something new.

The book starts with a brain-bending chapter: “It’s All Invented.”

“Every problem, every dilemma, every dead end we find ourselves facing in life, only appears unsolvable inside a particular frame or point of view. Enlarge the box, or create another frame around the data, and problems vanish, while new opportunities appear.”

The Zanders expand that to:

“It’s all invented anyway, so we might as well invent a story or a framework of meaning that enhances our quality of life and the life of those around us.”

This is an especially juicy time to walk through your business like Alice in Wonderland, realizing that the “appropriate, sensible” way to do things is often nothing but a pack of cards.

Don’t ignore the facts, especially the ugly ones. But do understand that it’s your game. You get to write the rules.

Nothing matters more than people

We’re told that some of that “human resources, goody two-shoes stuff” can be applied, like mascara, to our businesses — as long as cash flow is good.

But it’s a luxury. When times are tight, all that earthy, crunchy crap has to go. Those irritating employees are lucky to have jobs at all.

The late Tony Hsieh talked in his book, Delivering Happiness, about how that assumption could have lost him control of Zappos.

Hsieh faced a board of directors that wanted to cash out. That board had a hard time concealing their impatience with Hsieh’s “little social experiments.” In other words, his groundbreaking culture of employee autonomy.

The writing was on the wall. If Hsieh didn’t step carefully, the board would replace him as CEO and install someone who would impose a more traditional-looking system of discipline.

They wanted the company to grow up, to groom itself for a quick, tidy acquisition. Hsieh’s messy employee-centric approach didn’t seem in line with that.

Hsieh was savvy enough to manage his board while he found an investor smart enough to realize the truth — that his “little experiments” were what had turned a rather uninspiring idea (selling shoes online) into a billion-dollar business.

“You have to be good with people to work here. It turns out people are all we’ve got.”

Cluelessness can be an asset

One of my favorite business role models is Richard Branson.

Usually styled these days as “uber-successful billionaire, Sir Richard Branson,” Branson spent much of his business life doing things that were entirely clueless.

Branson is my favorite kind of naive businessman. The kind who tries everything that sounds like it would be fun. He works like crazy to make it happen and knows when to walk away from decisions that don’t work out.

Today, of course, he’s widely lionized. But for decades, he was generally considered to be an entertaining, naive flake.

He’s currently worth close to $5 billion. Give or take a million or two.

Having a clue is vastly overrated.

Naive does not mean stupid

And sometimes, such as when you’re learning how to pitch an article, it is smart to follow rules.

But naiveté is about rejecting stupid definitions of maturity. It’s about brushing aside rules that no longer make any sense (if they ever did).

You have to see a bigger picture, and choose to be brave enough to ignore conventional advice that doesn’t apply to you.

Be careful not to confuse being naive with willful ignorance. This goes back to ignoring the facts. You don’t want to keep working on something that’s … not working. Sometimes you have to stop and try a different way.

Similarly, taking shortcuts in order to seemingly get ahead will only come back to haunt you later.

With naiveté (rather than ignorance), there’s plenty of room for curiosity and learning, as well as space for experimentation and thoughtful observation.

But naiveté has no patience for ruthlessness (except with ourselves), jockeying for status, or trashing your conscience in the name of a paper success.

Ever been criticized for being naive? For being “too nice” to be in business? Or lacking the macho blood and guts you need to succeed?

We’d like to issue you an official permission slip to continue being (intelligently) naive.