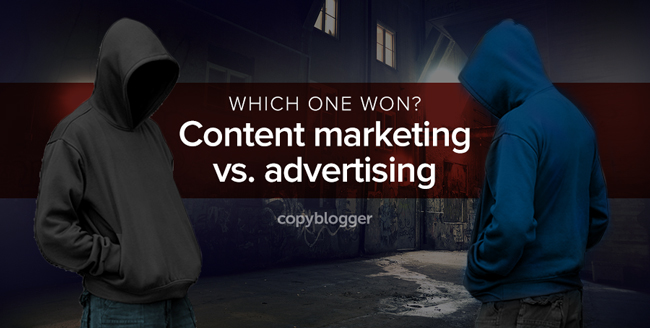 Traditional advertising pretty much had its way with the 20th century.

Big campaigns with big budgets from big companies influenced the things we did, said, and thought. And it’s safe to say that influence continues into the 21st century.

And which method is better?

We’ll answer those questions and more in this article.

To accomplish this task, advertisers run campaigns with a limited, but focused, use of media that may include:

The job of advertising media is to convince people that a product, service, or idea will solve their problems or satisfy their wants.

Here are four ways you could look at advertising:

However, traditional advertising has some notable disadvantages (and notable differences with content marketing).

If you look at the best advertising campaigns of the 21st century you’ll notice blue-chip brands — companies and organizations with deep pockets.

For most of us, even the bare bones Apple: Get a Mac campaign is out of our reach, never mind something like the complex production behind BMW’s The Hire.

It’s built around a campaign

Instead of a long-term effort, advertising campaigns usually run for a short period of time, say three to six months depending upon campaign objectives and budgets.

The product is the focus of the ad

Because of their expensive production and short shelf life, advertising campaigns put the product front and center.

In Budweiser’s iconic Whassup commercial, where a group of friends go around asking each other “Whassup,” two of the friends mention that they are drinking a Budweiser.

In Volkswagen’s The Force, a young Darth Vader attempts to use The Force on a Passat, which is front and center.

Traditional advertising is a combination of three entities: the publisher (television, radio, magazine), the company/advertiser (often companies hire an ad agency to create and manage the campaign), and the audience.

The company/advertiser buys space on the publisher’s media property for a limited time to get exposure to their audience. Once that time expires (once a month in a magazine, a 30-second spot during the Super Bowl), the advertising campaign media is removed, and the audience doesn’t see it again, which means …

The media is gone once the campaign ends

As I mentioned above, the digital age has changed this in many ways since commercials are often published on YouTube. But they still may be eventually removed from a company’s official channel.

The Marlboro Man, an idea created by ad agency Leo Burnett Worldwide for Marlboro cigarettes, is considered the third-greatest advertising campaign of the 20th century.

It was brilliant because it appealed to the rogue streak in men — that drifter bent. The campaign said, “Smoke Marlboros and everyone will think you’re cool.” What man doesn’t want to look cool?

Yet, like most advertising campaigns, it was a barrage of images and messages. There was no conversation. No relationship except “buy our product.” No space for feedback.

The disadvantage of putting the product “front and center”

Let me pause for a minute and explain why putting the product “front and center” in traditional advertising is a disadvantage. The truth is, when the product is part of the message, we understand right away that it’s a sales message.

That’s not a terrible thing — any reasonable person will understand that a company is in business to sell their products and services.

But this is where content marketing comes in because this hard-sell approach has gradually weakened traditional advertising. If we’ve learned anything about advertising and marketing in the last 20 years, it’s that customers want to be heard.

Before we go on, let’s briefly define content marketing:

Content marketing means creating and sharing valuable content to attract and convert prospects into customers, and customers into repeat buyers. The type of content you share is closely related to what you sell. In other words, you’re educating people so that they know, like, and trust you enough to do business with you.

Like advertising, content marketing aims to convince people that a product, service, or idea will solve their problems or satisfy their wants.

However, there are some important differences with content marketing.

The main difference between traditional advertising and content marketing is that with content marketing, the company becomes the advertiser and the publisher. Instead of selling your products or services to someone else’s audience, you build your own audience — and then determine what to sell.

That’s the story behind our company, Rainmaker Digital, which started as a blog and blossomed into six distinct product lines.

The product is not the focus of content marketing

With content marketing, you may spend roughly 90 percent of your budget on creating content that educates, inspires, and entertains — and only 10 percent on selling a product.

Ten percent may seem small, but the trust, relationships, and authority you build during the other 90 percent really does a lot of the selling for you.

With content marketing, you position yourself as someone who is an authority, can be trusted, and is likable, so when it comes time to sell something, people are already in line.

Since content marketing focuses on solving customers’ problems, keeping the audience engaged, and inspiring them to overcome challenges, the practice becomes a long-term game.

Heck, most of us don’t have the brand equity, authority, or pocketbook of a company like Apple, Dove, or Budweiser … so we can’t win with the one-off nature of traditional advertising (particularly if it flops). We can win, however, by consistently publishing quality content.

You open a two-way conversation

In many ways, content marketing was built to satisfy the consumer demand for a voice.

Blogs invited replies and questions through the comments section. Social media sites like Twitter and Facebook tore down the walls that separated consumers from companies, allowing people to talk directly to businesses.

This two-way conversation promotes a better business and better product when the company listens and adjusts.

A great example of a company that built a business around content marketing is Buffer, the popular social media app. During their early years, they first outfitted their blog with outstanding content and then the team started driving traffic to their website through guest posting and content syndication opportunities.

Canva, the easiest-in-the-world-to-use design software, forced people to take notice of this small company with its relentless publication of epic posts like 60 Free Fonts for Minimalist Designs or The 30 Best Free Social Media Icon Sets of 2015.

There’s another important issue I need to point out very clearly here: Companies who invest in content marketing should avoid building on other media properties. This is called digital sharecropping, and it exposes you to the whims of the property owner and prohibits you from capitalizing on the value of a media asset. Let me explain.

When companies invest in content marketing by publishing content on a property they own (their own website), they build a media asset that may be worth money down the road. For example, Brian Clark has been offered seven figures for the copyblogger.com domain — just the website, not the products that actually generate revenue.

People understand the immense value that driving a ton of traffic brings to a company. Content marketing helps you build those traffic streams.

When to use advertising

Let me make this clear: Here’s what I’m not doing. I’m not recommending that you should never advertise. When you think about the benefits of both advertising and content marketing, you’ll realize that one is not better than the other. You just need to figure out which one will help you meet your specific goals.

So, when should you launch an advertising campaign?

One of the biggest challenges new businesses and freelancers face is exposing their products or services to prospects. Think of advertising as a mechanism that quickly closes that gap.

This could be as simple as running a month-long Facebook ad campaign or a Google AdWords PPC campaign.

Of course, advertising is expensive — from the planning and production of the media to the buying of ad space. But if done right, it can result in a quick flood of visitors to your site.

It was a fast-paced, accurate way to learn about what worked and what didn’t.

Of course that was not my money, and you may only be able to budget $200 a month toward Facebook ads, but the cost may be worth the results.

Copyblogger built an audience through content marketing (two blog posts a week for a few years) before we sold anything from the site. Once we had an audience clamoring for a product, and they told us what that product should be, we built it and sold it to the audience.

Today, the website is 10 years old, and you will occasionally see a promotion — whether it’s an announcement about the Rainmaker Platform, the launch of our podcast network, Rainmaker.FM, or that we’re reopening Authority to new members.

So, when is the best time to use content marketing? All the time. Here are some specific examples.

Now that we’ve covered the differences between content marketing and advertising, let’s test your knowledge with a little quiz.

Can you tell the difference between content marketing and advertising?

Here are the rules: Below you’ll find five real-world examples. Your job is to guess which ones are content marketing and which ones are advertising.

Then I’ll explain the answers.

1. Blendtec’s “Will It Blend?” videos

The Blendtec YouTube channel displays many of the classic features of content marketing — consistent publishing, entertaining format — but this video is advertising because the product is the main focus of the content.

2. Old Spice’s “The Man Your Man Could Smell Like”

Wieden+Kennedy, the advertising agency behind this campaign, originally launched two or three commercials on short rotation, but soon discovered their popularity and spun out more than 100 minute-long YouTube videos.

That’s certainly content marketing, right? Again, no, because the product was front and center, and they are no longer making similar videos. It was a limited-time campaign.

As Contently’s Joe Lazauskas said, GE is the new Red Bull when it comes to content marketing.

“Tomas Kellner, a former ‘Forbes’ editor, crushes his reporting, and the stories on GE Reports regularly go viral on Reddit. Brands usually go viral on Reddit for ruining the world or releasing really bad lip-syncing videos, not for their content marketing.”

Can you guess why? While the product isn’t really front and center, it is central to the plot, and the storyline drives this movie trailer.

It’s a one-off commercial announcing the launch of Madden NFL 16, which makes it more of an advertorial than traditional content marketing.

While the title of the Rainmaker.FM podcast network refers to Rainmaker Digital, our company name, none of the shows explicitly discuss our products except for a short ad bumper at the start or end of each show.

So, how did you do on that short quiz?

Let me know in the comments if you have any outstanding questions or thoughts. I would love to hear from you.