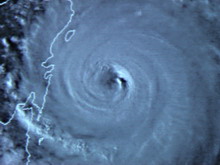 What does powerful, engaging content have in common with the brutal intensity of a hurricane? Quite simply, they are both unstoppable, irresistible forces.

Powerful content must resonate so strongly with the reader that she can’t turn away. Likewise, once you’re caught in the torrential rain, crushing winds, and merciless storm surge of a hurricane, you’ve got no choice but to ride it out to the end.

It may seem strange to use an adversarial analogy when trying to attract and engage readers, but attention is an adversarial function. Attention is a filtering process, which means that people are looking for any reason NOT to read your content.

When bombarded with hundreds or thousands of messages daily, the human mind finds it much easier to flee than to surrender precious attention. So, your content must lash out with irresistible force against the filters and keep the reader engaged from beginning to end.

Let’s take a look at how the storm develops.

The Storm Hits: Headlines and Hooks

If your headline is weak, the reader is gone… he boarded up the windows and left town before traffic got bad. That’s because the filtering process is strongest at the headline, and why skillful headline and title writing remains one of your top priorities.

You don’t have to write Cosmo-style headlines to capture attention, but you better know how to write a headline that attracts the people you’re after. Remember the “4 U” approach from Writing Headlines That Get Results?

The unique aspect of your headline is also your hook. And the hook must be carried over into the opening in order to truly suck the reader into the storm.

Keep in mind Hemingway’s advice about beginnings: Use short opening paragraphs. Too often I’ll be sucked in by a headline, only to be slammed with an impenetrable opening paragraph. It’s certainly possible to get people to read larger blocks of text, but it’s much easier once you’ve gained momentum.

I’ve written about openings before, but here’s a strategy that instantly engages and holds attention throughout. Create an open loop by starting with a dramatic story or anecdote, but don’t reveal the resolution before moving into the body of the content. By leaving the reader hanging, you’ve created a psychological tension that keeps the mind seeking closure and naturally engaged with the content.

For Pulp Fiction fans, think of the shocking opening scene (video not safe for work). We don’t see or find out what happens to Pumpkin and Honey Bunny until the final scene of the film. That’s one example of an open loop.

Into the Eye of the Storm: Crystal Clear Body Copy

After battering away at the attention filters with our torrential opening hook, it’s time to ease up and deliver the promised beneficial information. The eye of a hurricane is the calm center of the storm characterized by low surface pressure, light winds and no rain, and it’s a good guiding concept for the meat of your content.

Body content is an easy place to lose a reader to scanning, so make things easy with crystal clear, action-oriented and direct language. Structurally, this is where subheads, bullet points and/or numbered items will make a big difference in reader comprehension and retention.

Above all, deliver value. The emphasis on clarity in the body of your content leaves little room for fudging. If you don’t know your stuff, the storm blows over before you can move the reader to inspiration or action with a powerful close.

Have you ever read a reasonably useful list post on a blog, only to be left with a sense of emptiness when it just stops? A strong, passionate close is a hallmark of persuasive writing, and returning to the hurricane model, impossible to avoid once the eye passes by.

Rhetorical masters understand that the close means everything. After catching attention by appealing to the interests of the audience and laying out the logical aspects of an argument, those well-versed in oratory launch into the most emotionally-stirring portion of the presentation to prompt action or gain acquiescence.

Take a look at the close of Martin Luther King’s “I Have a Dream” speech (excerpted here). Rather than trailing off, the momentum of King’s message increases to Category 5 hurricane force.

For most content, you’re not going to get that dramatic. But structurally, it’s a great way to think.

For example, if you used the “open loop” technique mentioned above, the beginning of your close is the time to launch back into the story and close the loop, which leaves the reader emotionally satisfied by removing the psychological tension. Then express how the illustration supports the points made in your body content, and ask the reader to take some form of action if appropriate.

The Battle for Attention is Never Ending

Publishing and marketing online is a battle for attention. And it’s not getting any easier.

The trick is to focus on providing insane value to your readers and prospects. But don’t forget about those ruthless filtering mechanisms that each person employs to save themselves from information overload.

This is where the battle for attention is fought and won by successful online publishers and marketers. So get yourself in the “hurricane mindset” to craft content that truly rocks.

Previous article: Sharpen Your Copywriting Skills with the 60-Second “Stopwatch Challenge”
Next article: Freelance Writers: 7 Advantages of Working in Your Dream Market