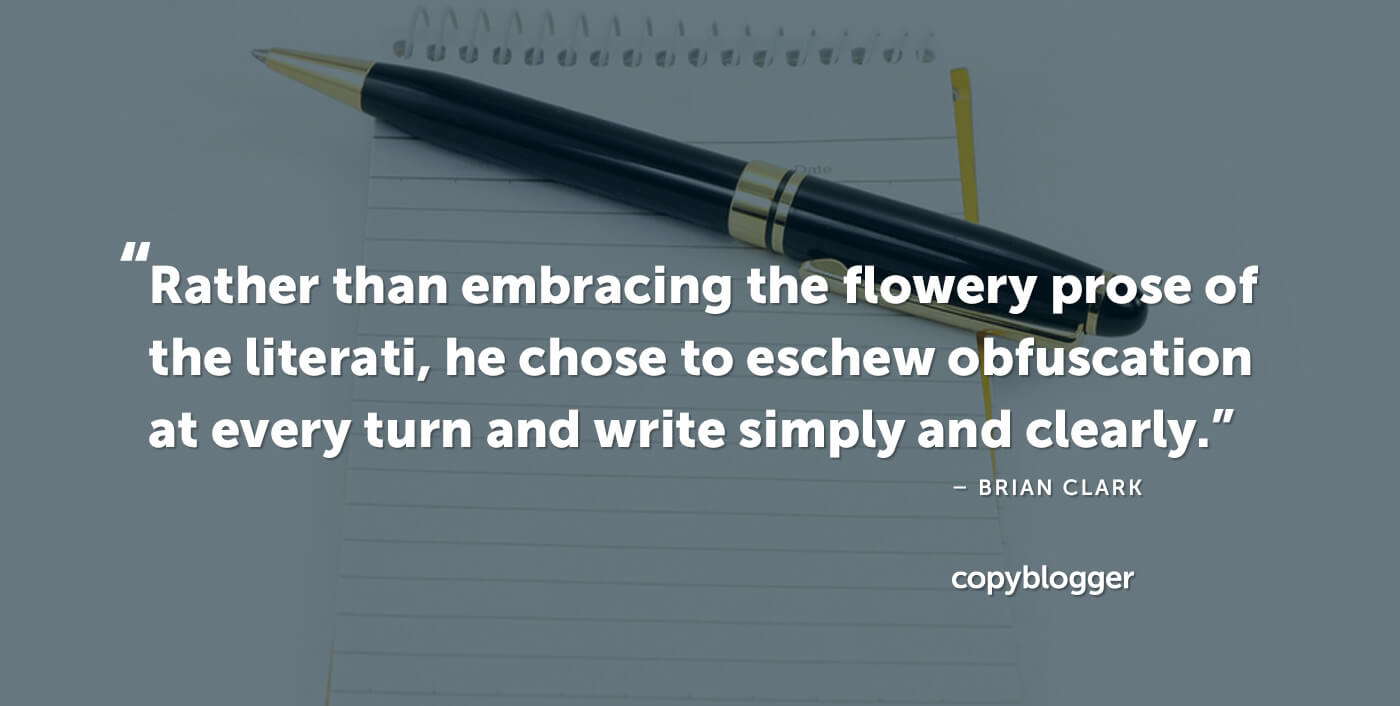 Think you’re not in a position to learn how to write like Hemingway?

Many business people faced with the task of persuasive writing for marketing purposes are quick to say:

But really, who better than Hemingway to emulate?

Rather than embracing the flowery prose of the literati, he chose to eschew obfuscation at every turn and write simply and clearly.

“Succinct” is one of the most accurate words to describe Hemingway’s writing style.

You’ll often find his name on a list of inspirational quotes for writers.

Keep reading to see why anyone who wants to write like Hemingway with persuasive language will need to give up long-winded explanations, tangents, and vague phrases.

Now it’s time to jump into some Hemingway writing style examples. Let’s see what Ernest can teach us about how to write a good blog post.

These tips work for effective written content, as well as anything you might be writing for audio or video.

Hemingway knew how to get to the point to write better content. He was famous for a terse minimalist style that dispensed with adjectives.

In short, Hemingway wrote with simple genius, which comes in handy when you’re learning how to pitch an article.

Perhaps his finest demonstration of short sentence prowess was when he was challenged to tell an entire story in only 6 words:

Here’s David Garfinkel’s take on how to write like Hemingway:

“It’s muscular, forceful. Vigorous English comes from passion, focus and intention. It’s the difference between putting in a good effort and TRYING to move a boulder … and actually sweating, grunting, straining your muscles to the point of exhaustion … and MOVING the freaking thing!”

4. Be positive, not negative

Since Hemingway wasn’t the cheeriest guy in the world, what does he mean by be positive?

Basically, you should say what something is rather than what it isn’t.

The latter is what Michel Fortin calls using up words:

Stating what something isn’t can be counterproductive since it is still directing the mind, albeit in the opposite way. If I told you that dental work is painless, for example, you’ll still focus on the word “pain” in “painless.”

Instead of saying “inexpensive,” say “economical.”

Instead of saying “this procedure is painless,” say “there’s little discomfort” or “it’s relatively comfortable.”

Actually, Hemingway did only have 4 rules for writing, and they were those he was given as a cub reporter at The Kansas City Star in 1917.

So, in order to have 5 for this post on how to write like Hemingway, I had to dig a little deeper to get the most important of his tips for professional writers:

“I write one page of masterpiece to ninety-one pages of shit,” Hemingway confided to F. Scott Fitzgerald in 1934. “I try to put the shit in the wastebasket.”

Previous article: Did Alanis Morissette Get Irony Right?
Next article: 3 Ways to Make Writing a Little Easier … without Lowering Your Standards