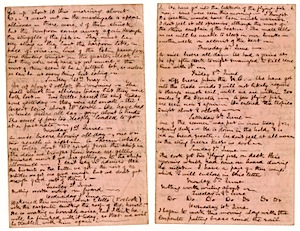 It felt like the walls were closing in, the room growing smaller.

My heart was hammering hard enough that I could see my pulse against the back of my eyes.

I was having trouble breathing, an automatic function that was suddenly requiring conscious thought.

The lab’s normal smell of yeast — food for the stock of fruit flies — had grown pungent, vaguely offensive.

The people around me felt sinister, I avoided them.

I knew — on a primal level I hadn’t visited before or since — that I had to get out. I was trapped in a box, like an animal.

What does any of this have to do with marketing or writing or business?

Funny you should ask …

The movie Footloose, and the battle for your brain

I’ve always been a writer.

Writing is a strange animal. It can be an art and it can be a vocation, but it’s seldom both.

For me, it was always an art. Oh, sure … as an artist, I knew all about those people out there who made a living by twisting writing into something unnatural — creating nonfiction or ad copy — but that was entirely different from what I did.

That kind of “assembling words into sentences” was, as far as I was concerned, more akin to accounting than writing.

What I did with words was pure, blue-sky creation.

So, accordingly, I did what artists do. I made my art, I let it be what it wanted to be … and when it was done, I tried to sell it.

And I got precisely … nowhere.

The whole of the endeavor — from the time spent creating to the time spent failing at selling — really pissed off the left side of my brain, which was skeptical of this art crap and realistic about its lack of income potential.

Funny organ, the brain. They say the right side handles creativity and the left side handles logic and taking care of business, making the two a bit of an odd couple.

Personally, I imagine the halves of the brain as Kevin Bacon versus Jon Lithgow in the movie Footloose.

So while the right side of my brain was busy living the dream, the left side packed its briefcase, put on its dress hat and tie, and hit the streets to find me something productive to do with my time.

“What was I good at that might actually make a buck someday?” it asked.

I was good at left-brain stuff. I was good enough, it turned out, to warrant a Ph.D. fellowship at Case Western Reserve University, where I’d get paid (pitifully, but paid nonetheless) to take classes in the A.M. and study fruit flies and electrophoresis in the afternoons.

After graduation, I could get a paid postdoc position or two, then a lucrative job at a research firm or pharmaceutical company.

Problem solved. The left side of my brain was jubilant.

But that’s where the trouble started.

How fruit flies helped make me the writer I am today

When I started at CWRU, I stopped writing. I had to.

I had a long commute, long days in the lab, and a wedding to prepare for back home. I’d been a hybrid right/left-brain guy, but I transitioned.

And that would have been fine, except for one thing: I wasn’t meant to do science. I was meant to write.

And, even though the people were nice enough, I disliked them for their single-minded focus on science. Don’t these people ever just hang out and be ridiculous? I wondered. Will my casual jokes be wasted, and will they ever understand my pop culture references?

But I ignored all of that, because you’ve gotta make a living. Writing was great, but art almost never manages to pay the rent.

I told myself that the situation I was going into was pretty cool. I got to use fancy machines. I got to play with chemicals. And hey … I was (and still am) interested in science.

So I ignored the voices of protest … until they became insistent.

Until workday mornings started to seem blacker and darker than they actually were. Until I started getting indigestion and a nervous heartbeat. Until I started being spooked by the most innocuous things, and until I started seeking out constant company because being alone terrified me.

Until, eventually, I started to have full-blown panic attacks.

And when that happened, I immediately did two things, both of which came out of instinct.

First, I left my program and the labs and refused to look back. I had no other training and no prospects, but it didn’t matter. This was about survival. I had to leave.

The second thing I did seemed to happen by chance… but looking back now, I see that it was far from coincidental.

I started to write again.

What it means to be a writer

It took six months away from the lab, pursuing a fulfilling, upwardly-mobile career as a Borders Bookstore cafe barista, before I stopped being afraid of my own shadow and began to feel like myself again.

During those months, I didn’t make much money. I didn’t become more realized as a businessperson.

It probably looked from the outside (and to my soon-to-be-in-laws; thanks, Frank and Carole, for hanging in there) as if I were wasting my life. But it didn’t matter. I was free.

And more importantly, I was writing.

The fruit of that tumultuous half-year was a 700-page monster of a humor novel about an uprising at a bagel deli.

It was loosely based on the places and the people I’d known before I’d tried science as a life path, and was my way of going back to a time when I felt fulfilled, happy, and safe. When I’d left that life and begun my “career,” it had felt like a death.

Writing the novel was my way of grieving.

When the novel was done, I tried to pitch it to agents and failed completely, but it didn’t matter. Writing that novel wasn’t about making money or becoming famous.

It was about healing.

That book was about reminding myself who I was, and what I was supposed to be doing with my life.

When I got married the next year, I had to declare my occupation on our marriage license.

At the time, I was still a cafe barista and had never made a dime by writing words, but when the clerk asked what I did, I told him I was a writer. I still remember how saying that made me feel.

You tell people that you’re a writer, and they don’t get it.

They’re mired in the left-brain / right-brain dichotomy, uncertain how you could “be” something that’s usually considered a hobby.

So they’ll ask what you write, and who you write for … but ultimately it comes down to one question: “What does that mean, ‘You’re a writer’?”

I have an answer to that question now.

I see a lot of people who have blogs, so they write posts.

I see a lot of people who are copywriters, so they write copy.

A lot of people who call themselves writers think it’s their job — in various senses of “job” — to put words together. They make sentences. Answer arguments. Explain features and benefits. Create dialogue.

But few ask, Why does what I’m doing matter? Or more to the point: What does it all MEAN?

The best writers have a purpose. They have a reason for doing what they’re doing.

Everything these people write is a right/left-brain fusion, a unique and beautiful thing that manages to convey a point AND express emotion AND drive a business outcome AND move the reader in one way or another.

The best writers don’t just assemble words. They assemble big ideas, and then use those ideas to do big things.

The best writers have a story.

They’ve fought for their ideas.

They hit you with their words so hard, it’s like a violent encounter.

Jon Morrow told me once in an interview (which you can get right here), “When I’m writing a blog post, I literally imagine myself bludgeoning someone with a baseball bat. I want my words to hit them that hard … because you can’t ignore someone who’s hitting you with a baseball bat.”

The best writers want to change the reader.

If a person reads their words but leaves as the exact same person they were when they started reading, the very best writers feel like they have failed.

I want to change you here, today.

I write almost every day, and I write a lot. I have to … because I don’t want to be reminded again what happens when I stop.

I want you, as a writer, to find that spark within yourself.

If you are a writer and have been simply “assembling words,” I’d like you to stop.

And ask what your writing really means to you.

Be bold. Be gentle. Be strong. Be compassionate. Be violent.

And start to change the world.

About the Author: Johnny B. Truant is a writer. You can sign up for his free series on how to start making more money with your own writing here.

Previous article: The Four “Productivity” Personality Types and How to Write for Each One
Next article: Introducing the StudioPress Marketplace: Great WordPress Themes from Exceptional Designers