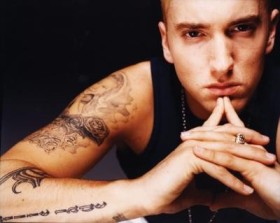 Ten years back, my soon-to-be wife, Cindy, and I first noticed the bombarding beat for Marshall Mather’s “My Name Is.”

“What an ass,” I said as the two of us sat to watch the Grammies a year later. “It’s sad he can sell so many records just by being vile. Really, how much talent can that possibly take?”

“Have you heard the record?” Cindy asked.

She pursed her lips in silence as I stuttered through a series of half-articulated examples — the criticisms of others slipping through the filter of my voice. Unlike me, she was withholding judgment of the music until she’d heard more of it.

“You know if you listen to the album you’ll be a lot more entitled to an opinion, right?”

My wife has taught me, and continues to teach me, more than anyone else.

The next day I bought the Slim Shady LP along with the newly minted Marshall Mathers album. I then spent the next few months in a new sort of aural awe.

I’m not sure what my expectations were, but they certainly weren’t to meet a man who would murder my preconceptions of the alphabet.

Though I’ve always been drawn to great lyricists and songwriters, I’d never heard anyone able to effectively indulge satire, rage, sorrow, shame, guilt, regret, power, passion, loneliness, bravado, stupidity, genius, leadership, idiocy, misogyny, sympathy and, believe it or not, tender compassion. And Eminem was doing it in a stream of pentameter that would, I’m certain, cause William Shakespeare to shudder.

Plus, the dude is a brilliant storyteller.

Marshall Mathers is a lyrical sniper with a shotgun, and vents more in a few hundred words than many are able to effectively communicate in pages of copy. When I listen to an Eminem record, I’m hearing a man who cares about every single syllable and the exact tone of its delivery.

This isn’t to say all his songs are good. In fact, each album has a handful of songs I find both repugnant and unendurable. Yet they are always peppered against gems of absolute genius.

Eminem is a complicated artist, and could easily provoke pages of arguments on his positives, negatives and overall impact on our culture for better or worse. But as a writer and marketer, few can touch what he’s managed to accomplish.

Meaning that if we pay attention, there’s plenty to learn.

What Eminem can teach you about writing

1) Write and read all you can

Marshall started writing while just a child, constantly sanding the rough edges of his craft, knowing without doubt that the only thing that would get him out of the trailer park and into a better life was furious effort and endless practice.

Marshall familiarized himself with the greats until storytelling was as natural as drawing breath. He may have started by imitating the pioneers who came before him, but Eminem soon blended their legacy into his own brew that was like nothing else.

Eminem’s best tracks harbor some of the tightest writing I’ve seen in any medium. One has to wonder just how long he spends on each song, considering how securely each syllable is cemented in place.

Not only can Em craft a compelling argument in prose, he can also structure it in a way that would dazzle Dr. Seuss, not only by rhyming words that shouldn’t rhyme, but by packing more poetry into a verse than should be technically possible. Only fastidious editing can pull the written word so taut.

3) Write what you know

One of the things that makes Eminem so polarizing is that his message flies from mind to mic with only the thinnest filter in between. Listening to his music is like tuning into a live therapy session that would make Tony Soprano seem stable by comparison. It’s easy to believe that Marshall is speaking directly from his heart and unique set of experiences.

The best of Em’s songs achieve something rare in commercially produced music — they realize a powerful climax prior to their conclusion. Many of Marshall’s songs are written as arguments, and it’s usually in his third verse when he drives his point home, often with a lyrical sledgehammer.

5) Be concise and use powerful sentences

Marshall pares his arguments down to the marrow. His intuitive sense of flow allows him to seamlessly drift from the measured cadence of ordinary speech to an unrivaled intensity of verse, but it is always the power of his writing which enables him to drive his point home with such precision.

What Eminem can teach you about marketing

Eminem is a terrific writer, but if he wasn’t also a natural marketer, he might very well be still living on the wrong side of 8 Mile.

1) Put yourself out there

Be tireless and undaunted. Marshall paid his dues in underground clubs as the only white boy to step up and take the mic.

I was playing in the beginning, the mood all changed. I been chewed up and spit out and booed off stage. But I kept rhyming and stepwritin the next cypher, best believe somebody’s paying the pied piper . . .

Em knew that no one was about to hand him anything. If he wanted his voice heard, it was his job to spread it.

As Sonia recently pointed out, Jenny Lawson and Naomi Dunford aren’t for everyone, but those who love them, really, really LOVE them.

See I’m a poet to some, a regular modern day Shakespeare, Jesus Christ the King of these Latter Day Saints here. To shatter the picture in which of that as they paint me, as a monger of hate and Satan — a scatter-brained atheist. But that ain’t the case, see it’s a matter of taste. We as a people decide if Shady’s as bad as they say he is. Or is he the latter — a gateway to escape? Media scapegoat, who they can be mad at today . . .

Build a backstory that is unique to you and you’ll develop a following that can belong to no one else.

Marshall’s storytelling was evident in his first LP, but he cemented his place as a teller of unforgettable tales in the second album, most notably with the song Stan, which tells the story of a crazed fan who does double duty in the song as a doppleganger for Marshall. Eminem used this narrative as both a means of self reflection and as a response to the many critics questioning the cultural impact of his music.

Eminem’s music is crammed with experimentation. From the simple lo-fi beats of his earliest work to the wicked carnival rhythms which characterized his partnership with Dr. Dre, and all the loopy meters in between, it’s easy to imagine that Marshall isn’t happy unless he’s trying something new.

Not every experiment works, but at least he’s willing to play in the lab.

A big rule of marketing is to address audience objections before the audience does.

Eminem has a history, going all the way back to his first major release, of addressing critics head on without flinching.

How many retards’ll listen to me and run up in the school shooting when they’re pissed at a teach-er, her, him, is it you is it them? ‘Wasn’t me, Slim Shady said to do it again!’ Damn! How much damage can you do with a pen? Man, I’m just as %#&@#! up as you woulda been if you woulda been, in my shoes, who woulda thought, Slim Shady would be something that you woulda bought?

Marshall Mathers is complicated and undeniably controversial, and though his critics would correctly point out that his music is filled with hate and vitriol, few of them seem to acknowledge that he is also manipulating his own material, taking his arguments to such ridiculous extremes that he turns them into farce.

Love him or hate him, the man known as Eminem has proven that he’s an important force in both modern music and culture. You don’t have to like his lyrics or his message to learn something from him. I’m grateful for the day my wife wondered out loud if I really knew what I was talking about.

Previous article: The Art of the Paragraph
Next article: Are You Getting Off Track With Your Readers?