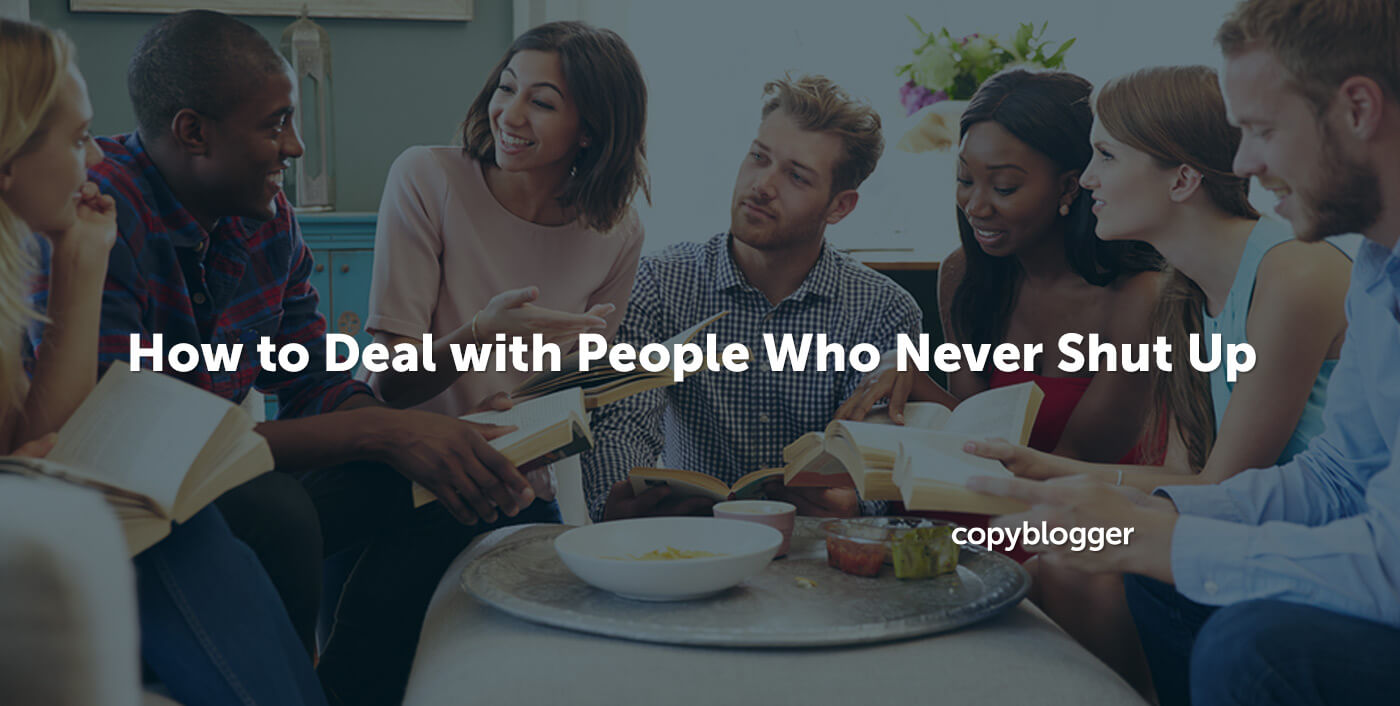 Do you ever fantasize about what you’d say to people who never shut up?

But really, you just wish they would stop running their freaking mouth.

Know what I’m talking about?

I’m guessing you do. In fact, I’m betting you go to extreme lengths to make sure no one thinks you’re one of those people.

You know how to STFU, and the last group you want to belong to is that Tribe, right? You couldn’t respect yourself.

Stop worrying if people would tell you to shut up

When you’re worried about other people telling you to STFU, several bad things happen when trying to gain social media stature:

You think this is smart. And to a certain extent, it is. If you want to get through life without anyone disliking you, then buttoning your bottom lip, keeping your eyes to yourself, and getting on with your business is the perfect strategy. Just like you can learn how to write like Hemingway, you can master how to speak like Hemingway.

But no one tells you that it’s also a good way to spend your life in fear.

You can never say what you really think for fear that someone will disagree. You can never tell other people what they really need to know for fear that you’ll ruin your relationship with them. You’ll never get around to writing the book or blog you’ve been planning for fear that no one but you will think it’s important.

Sure, everyone who knows you will like you, but not many will know you. You’ll lose all the qualities of a good writer. The fear of “shut the f*ck up” will have driven you into mediocrity. It’ll crush any chance you ever had at greatness.

How do you balance the two?

How do you say what you think without becoming a “know it all” who everyone wants to punch in the face? How can you make sure that other people will find you interesting instead of annoying or naive?

Well, you can’t. Mainly, it’s because you’re not omnipotent, and you’re not in control of what everyone else thinks.

But you can avoid making some common mistakes.

The 7 annoying types of people who won’t shut up

These mistakes are so common, in fact, that they’ve all been turned into clichés.

I’ve never seen anyone collect them all in one place before, though, so just for your benefit, here are seven types of people who never shut up.

Type #1: People who are too big for their britches

The people I most often want to shut the f*ck up are what my mother would call “too big for their britches.” They’re trying to sound smarter than they really are, pretending to know more than they really do, or acting like their life is better than it really is. They come off as phony, and it rubs everyone the wrong way.

The truth: you can’t fake being an interesting person. If you find yourself feeling like you have to pretend, then the problem isn’t your writing. It’s you. Go spice up your life, and you’ll find it infinitely easier to write something other people want to read.

Type #2: Snobs who look down their noses at everyone

Of course, you can take it too far. Some people have done so much that they seem to look down their noses at everyone. For them, it’s not a matter of trying to impress anyone. They genuinely believe they are superior. They’re the Michael Jordan of their industry, and no one comes anywhere close to matching their talent. What’s more, they make sure everyone else knows it.

Every once in a while, I see beginning bloggers dipping into this mode. Usually, it’s a successful person that’s starting a blog, and they believe their achievements entitle them to continued attention. Big mistake.

No one is entitled to attention, not even celebrities. If it became obvious that they were looking down their noses at everyone, they’d lose huge portions of their audience.

For a medium that’s supposed to be about self-expression, most bloggers are surprisingly cold. Their writing reminds me of something I might’ve read in Biology 101. It sounds like they’re trying to impress the teacher with their knowledge, and they’ve forgotten that blogging isn’t writing an essay. It’s a conversational medium.

To be conversational, you can’t be cold. You have to be warm, edgy, and most importantly, FUN.

Type #4: Anyone who talks the talk but can’t walk the walk

You know those people who are always talking about what they’re going to do, and what they’re saying sounds really good, but they never actually get around to doing it? After a little while, you stop believing them. If they keep it up, you eventually stop listening altogether. No one has time for someone who talks a good game but doesn’t back it up with action.

Your readers might not care too much, but other bloggers watch this type of thing. Do it long enough, and you’ll lose their respect, which is disastrous when you’re trying to grow a blog.

Type #5: People who beat around the bush

Why do some people never shut up? Some residents of the Southern United States can be very sensitive about this one. To them, beating around the bush isn’t poor communication. It’s cultural heritage. You don’t just come out and say what you mean because, well, that’s “just not the way things are done ‘round here.”

I’m from the South, currently living in the South, and I love my Southern heritage, but beat around the bush for more than a couple of minutes, and I’ll ignore you with the politest of Southern smiles. I don’t have time for figuring out what everyone means, online or otherwise. Either get to the point, or STFU.

Type #6: Morons talking out of the wrong end

In short, they’re talking out of their ass.

When you’re a blogger, it’s easy to make the same mistake. You start out with lots of stuff to write about, but sooner or later, the well just kind of runs dry.

The problem is, your readers expect you to keep publishing on a regular basis, and that means finding something to write about and learning how to write articles fast. In a moment of desperation, you might be tempted to choose a topic you know is foolishness, just to keep your readers happy.

Big mistake. Online, people are even less tolerant of BS than they are in real life. If you want them to listen to you, you’d better either say something that has at least some foundation in reality, or say nothing at all.

Sometimes, it doesn’t matter how interesting you are. Talk for too long and people will resent you for using up their time, even if they enjoyed listening to you.

They’ll also hesitate to connect with you in the future.

Dealing with people who never shut up

It’s one thing to acknowledge these different categories. It’s another to learn how to get people to shut up. If you’re looking for some pointers, check out these different scenarios.

Why do some people never shut up?

How to tell someone they talk too much, in a nice way

If you need some quiet time and you regularly encounter a chatty person, it can be difficult to figure out the appropriate way to politely resolve the situation. But you’re going to have to learn how to tell someone they talk too much, in a nice way.

One easy thing you can do is make it about your needs, rather than what the other person is doing wrong.

Communicate about the type of peaceful environment that works for you and ask the other person if they can be considerate while they’re around you. That way, they can respect your boundaries without feeling that they’ve done something wrong or that they have to change their personality.

When to scold people who never shut up

If you’ve expressed your needs and the other person still won’t respect them, you might be left feeling like why are people so f*cking stupid? But it’s important to not take things personally. The other person is likely not trying to annoy you on purpose — they’re just used to getting away with their behavior.

People who won’t shut up often don’t listen very carefully, so you might need to tell them how you feel multiple times. Sternly remind them that you don’t have time for nonsense, and that you’d appreciate it if your communication with them was swift and brief, rather than long-winded and time-consuming.

You can also lead by example …

The best rule of thumb: make your point as quickly as possible, and then shut your mouth.

That said, I think I’ll take my own advice …

Previous article: Why You Think Content Marketing Doesn’t Work
Next article: How to Publish Regularly, Even If You Lack Writing Confidence