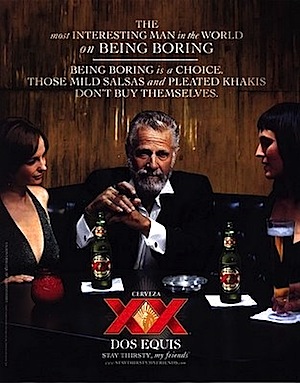 It’s good advice, but it’s nothing new. You’ve probably known from the beginning that being able to interest readers is a crucial part of growing a popular blog.

It’s pretty obvious that no one is going to stick around unless they find your blog interesting.

But how are you supposed to do it exactly? How can you “be interesting?”

Far too much of what we write about attention and interest is abstract. We talk about differentiation, value, and triggers — all useful concepts, but you can’t point to them.

You can’t hold out your hand and say, “Give me some differentiation.” As a result, it’s hard to wrap your mind around what those things actually mean.

I’ve been paying attention to the things that command attention, both of myself and others, and I’ve made a list of 21 techniques that work. This list is far from all of them I’m sure, but it should be enough to get you started …

3. Communicate what others can’t

As writers, we take ideas from our heads and put them on the page. Sometimes we forget how difficult that is for some people and how valuable that makes us. Lots of people would give anything to be able to say what they mean. But they can’t. So, they turn to songs, books, and art that communicate for them. Be a producer of those things, and you’ll never lose their attention.

Chip and Dan Heath, authors of Made to Stick, say that one of the best ways to set yourself apart is to break people’s “guessing machines.” Take a surprising position, making outlandish analogy, or otherwise do the opposite of what you normally do. As long as it’s unexpected, people will stop and pay attention.

Bloggers are far too serious. We’re so busy teaching that we sometimes forget to entertain. As a result, large portions of our readerships fall asleep. And what’s the best way to wake people up? Humor. Public speakers have been using it for ages, and as long as it’s appropriate for your audience, humor can wake your readers up and get them paying attention again.

7. Offer them an aspirin

Some of the best blog posts ever written are simple as an aspirin. Your reader has a headache, you have a cure, so you offer them that cure in the form of a blog post. They pay attention … not because of how pretty or well crafted your blog post is, but because it cures their headache. Conclusion: try acting like a pharmacist, not a blogger, and you’ll never lack for attention.

Ever noticed that a disproportionate number of advertisements feature a scantily clad woman? That’s because it works. It draws the attention of not only men (as you’d expect), but also women. For whatever reason, nearly everyone finds their attention drawn to it. Here’s proof that it even works with blog posts.

9. Tell them who they are

“Who am I?” is not just a question; it’s a universal quest that most of us follow for our entire lives, continually defining and redefining ourselves, always insecure about whether who we are being is really us. As a blogger, you can (and should) harness that insecurity. Turn your blog into something that defines your readers.

Every once in awhile, use your expertise to make a bizarre claim about the future. If you have any authority at all, people will take notice. Imagine if Brian or Sonia wrote a convincing, well reasoned argument that online courses are the business model of the future. Oh wait… they did, and some of the biggest names in online marketing continue to talk about it.

Many blog posts are like miniature textbooks; they’re instructive, well-organized, and put you to sleep with their lack of enthusiasm. If you want to become famous on the web, stop trying to sound like an all-knowing teacher and unleash the “inner dork” inside of you — the part of you that’s so enamored with your topic that everyone else thinks it’s funny … but they pay attention anyway. More on dorkyness here.

The fact is, pretty much everyone has felt the foot of adversity on their neck, but very few of us respond to it with courage and grace. Be one of those people, and you’ll find the world will be watching.

Want to stir people up? Make fun of their god, their politics, their family — anything they hold dear. Yes, they’ll be offended, but lots of other people will think it’s hilarious. If you can’t stomach being hated by a portion of the world and loved by another, then you don’t deserve to have a blog.

This one has been drilled into us so many times that I almost didn’t include it … except for one thing: people still don’t get it. Yes, stories support your points, make solid openers, and teach people while entertaining them, but a good story can make you a legend. I’m not talking about the little anecdotes that pepper the blogosphere. I’m talking about the story that haunts you on your deathbed. Forget about all the others. Tell me that one.

16. Break an important piece of news

Every time Google does something new, thousands of bloggers write about it. That’s great for Google, but where’s the real benefit for the bloggers? The first one to break the story is the only one that matters. It gets all of the traffic, links, and authority. Everyone else is just an echo.

For a long time, everyone thought you had to be the best to be successful. Then Chris Anderson came along and turned the world upside down with The Long Tail. He disproved what a lot of people held to be true, and it made him (even more) famous. Granted, it’s hard to engineer a breakthrough, but if you run across one, people will talk about you for years.

Want to make a good post better? Pick a picture that expresses exactly what you mean, and put it at the top of your post. Yes, it takes time, but the extra traffic is more than worth it.

Metaphors are the paths we create to lead our readers to our ideas. Create one strong enough, and it will become a highway of attention, leading readers to your blog more quickly than any other technique here (except maybe the last one. More on metaphors here.

Many bloggers crank out posts the way slaughterhouses crank out chickens. They’re ugly things, fit for nothing but consumption. If you want to surprise people, stop and put some actual effort into your blog posts, creating a work of art. You’ll be surprised by how many people remember it long after it’s been swept off your front page.