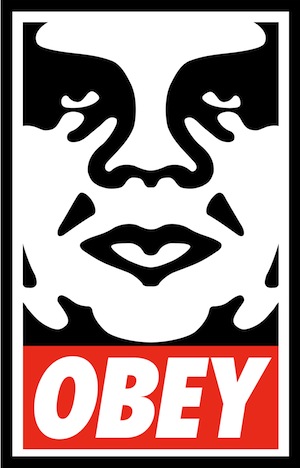 The word “OBEY” first caught my attention in 2000.

It was printed underneath a huge black and white silhouette of the famous wrestler Andre the Giant, and plastered across a derelict billboard on Wilshire boulevard in LA, of which there are hundreds.

It appeared both haunting and hilarious amidst the bland, big-box advertisements for Office Depot and Vons grocery chain.

What did it mean? Was it a call to arms, coercion, a warning? I really wanted to know.

Then it seemed to be everywhere I looked, light posts, sides of abandoned buildings, and then suddenly on a t-shirt I bought at an independent shop on Melrose Avenue.

I felt like I was part of something, that I knew the secret handshake.

Now Shepard Fairey, entrepreneur to some, criminal to others, is considered to be one of the art world’s most iconic and collectible commodities.

What’s the secret behind his success?

What does it take to go from making $4.25 an hour, hand printing skateboard stickers, to being one of the most influential American artists of our time?

Others might point to the controversial image of an unknown senator from an historic presidential campaign.

But perhaps there is something underneath all of the noise and media attention that you don’t recognize about street artist Shepard Fairey.

I’ll argue that Fairey is one of the greatest living content marketers.

There is no secret; Shepard Fairey is one of the hardest working artists in America and a dedicated content producer. He employs scores to help design his apparel line, create ad campaigns for mega-brands like Pepsi, and even album covers for Led Zeppelin.

He employed a captivating story from minute one, always producing work both unique and entertaining, and always true to his message.

By appropriating the styles of 80s punk band flyers, pop artists like Andy Warhol, and constructivist propaganda, he created a “unique story proposition“, and produced loads of free content from the start.

Your story must take on a life of its own

Two decades before he designed the cover of TIME Magazine, sold-out gallery shows, or appeared on The Colbert Report, Fairey used guerrilla tactics to put up his street art in highly visible places all over the world, night after night after night.

He worked for years doing graphic design by day to create a steady income so that he could concentrate on his first love, his art.

And by sharing his public art for free over many years he created something viral — the brand Obey Giant — and his audience demanded more. After a couple years, they were the ones spreading the message.

With the help of the internet, his posters hit the streets over a million times all over the world, and the emotional response to his work was undeniable.

In the acclaimed Banksy documentary Exit Through the Gift Shop, Fairey summed it up:

He saw that the traditional model was on the decline and was prepared to get rich slow.

Over the years he a built a blog, and a loyal email list, and now that email list buys up every limited edition print that he offers in record time … often turning purchases around immediately to collectors, for a large profit.

To review: great content builds trust and rapport over time. Obey Giant has done just that.

Shepard is no stranger to run-ins with the law. He has been arrested, roughed up, and sued for his non-traditional methods of spreading his message.

For all of his success, he has had his share of setbacks, and recently settled the criminal case filed against him by the AP for “fair use” of a rather high-profile photo.

Sometimes, in the pressurized worlds of publishing, journalism, and art, unfortunate liberties are taken, and it is not unusual for prolific content creators to let their emotions get the better of them.

Building a large audience over time has its benefits, but it can be a high-wire act where bad judgment is highly scrutinized.

Although Fairey ultimately received a slap on the wrist and 2 years of probation, he was forced to settle out of court with the AP in the civil case for a reported $1.6 million over the misuse of a single photo.

Nonetheless, that very artwork that caused the firestorm is still housed in the National Portrait Gallery in Washington, DC, enshrined forever with Fairey’s name on it.

Are you publicly displaying your work, in order to demonstrate your expertise and talent?

Shepard Fairy is only one of many examples (like the site you’re reading right now) of how the distribution of high quality content can drive a business, even an art business.

Are you ready to become a smarter content marketer?

Previous article: How to Build an Email List that Builds Your Business [Free Webinar]
Next article: 7 Very Clickable Marketing Links