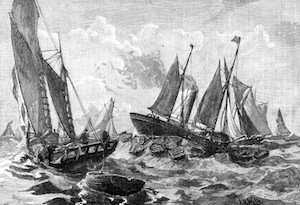 Once you decide to learn more about the craft of copywriting, you quickly find out there are two schools of thought.

One school hammers the reader with red headlines, yellow highlighting, and aggressive copy that grips the reader like a terrier shaking a squirrel.

The other school develops a compelling personal voice, nurtures a relationship with the reader, and uses soft-sell techniques to nudge the reader down the path to purchase.

So which one is right?

Well … they both are.

How to harpoon a customer

It’s easy to make fun of traditional sales pages, but they’ve been widely used because for a lot of years, they worked like crazy. And there are still versions that work well today. Like infomercials and Cosmo headlines, they may look dopey, but they’ve convinced millions of people to take action and spend money.

Readers for these pages typically arrive from an ad or, somewhat less commonly these days, an affiliate referral. The prospect tends to make up his mind in a split second about whether or not he’s in the right place. He then spends another three or four seconds deciding if this offer is going to meet his needs.

Red headlines, yellow highlighting, irritating pop-ups and pop-overs, and the other tricks of the trade are all ways to grab a stranger and focus his attention on what you have to offer.

Sure, long sales pages can be cheesy, but if you only have one shot at the prospect, they can work very well. A well-written traditional sales page acts like a harpoon. When a likely prospect swims along, if the writer’s aim is good and she gets enough power behind that harpoon, she can make the sale.

Is a harpoon always the right tool?

Harpoons work great when you need to strike quickly. But they have a few problems.

First, the “ugly” version that used to be widely used gives an impression of shoddiness and a lack of ethics.

That impression isn’t always accurate — long sales pages have been used for great stuff as well as junk. But unless you’ve already established credibility with your audience, the prospect can’t tell the difference. If the reader doesn’t urgently need what you’re selling, she’ll hit the back button as fast as she can.

Second, it’s really hard to write a good “harpoon” sales page that can convert a prospect in one shot.

The difference between effective sales letters and miserable failures can be surprisingly subtle. If you aren’t already Clayton Makepeace, you may find that although your letters look like his (to your untrained eye), they don’t work like his.

Third, cheap traffic is getting hard to come by.

With competitive pay-per-click keywords going for a few dollars instead of a few cents, these single-shot long sales pages are becoming less and less effective. The masters can still pull it off, and do … but you have to be a master.

If you’re still inspired to learn this strange and fascinating form, study the crusty old guys who developed the original techniques. Gary Bencivenga, Joe Sugarman, Clayton Makepeace, and Dan Kennedy all have resources out there that can start you on your apprenticeship.

You could also use a net

There’s an alternative approach you might want to consider.

Instead of hurling your single-pointed communication as forcefully as you can, consider encouraging your prospect to wrap himself in a friendly, supportive net.

In other words, rather than trying to harpoon customers with single-shot sales letters, snare them in a net of useful, relevant content.

Whether it’s a freeform stream like a blog or the organized sequence of an email autoresponder, a well-crafted content net not only snags your prospect for this sale, it keeps him fat and happy for the next one.

And you’ve probably noticed that it’s very handy for things like SEO and social sharing as well. The more connected we are with communication technology, the better the net works.

How to use a net without getting tangled up

Great single-shot copywriting is usually the result of many years of work and study.

Creating a net of great content over time, on the other hand, is a lot easier to master. You don’t have to get every word perfect. You don’t need an arsenal of sales tricks.

It’s mostly a matter of figuring out what your customer wants and needs, then getting out of your own way. And the copywriting techniques you do use can be “pretty good” instead of “The next incarnation of Gary Halbert.”

As you’ve probably guessed by now, the content net is the copywriting method we favor here at Copyblogger. You’ll still benefit from a well-crafted landing page (not an ugly one, please, we’re in 2012 now). But frankly, the fish are a lot easier to catch when you’ve been keeping them happy in your content net.

If you’re interested in finding out more specifics on how to do that, I put together a free, 20-part course called Internet Marketing for Smart People that can give you a solid head start.

It talks about the delicate balance between audience relationship, selling, and traditional copywriting. Go snag it now, and start weaving a net of your own.

Editor’s Note: This is a Copyblogger Classic post, originally published in June, 2008. We’ll be republishing classic content from the archives from time to time, updated — as this post has been — to be sure the advice is as relevant as ever.

Previous article: How to Build Your Email Marketing List with a WordPress Website
Next article: 7 Writing and Marketing Links Worth Reading