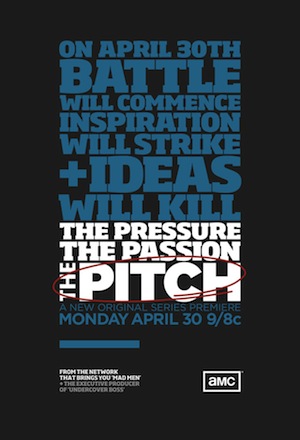 Warning: If you’re addicted to spending ungodly amounts of money in an effort to interrupt enough people into becoming “aware” of your product, service, or idea … skip this. You ain’t gonna like it.

Mad Men. The Walking Dead. The Killing. AMC has created some of the best television of the last two decades. So, when I saw the trailer for their latest — The Pitch — I was pre-sold.

Two nights ago, I took the dog for a walk, grabbed a drink, and then settled in on my beloved blue couch to see if AMC could do it to me again.

The Pitch is a weekly docu-drama following two advertising agencies as they compete to win major business.

It’s also, in my opinion, a record of the death of traditional advertising.

May our dear cousin rest in peace.

The myth of creativity in selling

The pilot episode of The Pitch starts with a meeting wherein the potential client (Subway) briefs both agencies on what they’re looking for. It’s cool to see behind the curtain of this process, but the cool factor degrades rapidly as both agencies fly back to their offices to build their campaigns.

In between scenes of the “creatives” throwing “creative” ideas across their respective tables, we’re treated to insights from the advertisers such as …

We pride ourselves on creativity, not playing it safe, doing things that no one has ever seen before.

Huh? Speaking to an audience, and selling to them, is largely an exercise in having the wisdom to enter a conversation that’s already happening in the prospect’s mind. It’s using the language the audience is already using.

Creating things that “nobody has seen before” — aside from the hyperbole of that statement — could work well as ride in an amusement park, or a fireworks display, but it’s the kiss of death in the art of selling.

Here’s another gem from the “creatives” …

We ask clients to take risks, because we’ve taken risks.

Huh. I’m fairly certain that a client wants to sell their product, not “take risks.” And who cares if you’ve taken a risk? Really, who cares?

Copywriters are paid to communicate the benefits of owning a product, using a service, or exploring an idea. We are not paid to take risks, whatever that may mean.

I’m all in for creativity, and for art. I’ve given much of my life to the serious pursuit of it, but when it comes to selling, creativity as it’s being tossed around by these agency types is more a hindrance than a help.

Back when we were all watching three channels on the television, a Clio award-winning spectacle stuffed in between scenes of The Dukes of Hazzard might have captured our attention, but only because that’s all that was on.

And even then, in the words of the man:

If it doesn’t sell, it isn’t creative. ~ David Ogilvy

The game has not changed, it’s been obliterated

Speaking recently about the end of the television/industrial complex, Seth Godin uttered:

… the model [was] very simple. You run $100 in tv ads, you made $110 in profit. And this was true for 35 years. Mad Men was not about good ads, it turns out if you just ran a lot of ads — of any kind — they made more money than they cost. And just in the last few years, it all fell apart … the underpinning of our entire economy went away.

If you’re throwing brand advertising at the masses and hoping something will stick, you’re playing a game that’s already over. Consumers have taken their ball and gone home.

Sure, multinational companies are still swinging for fences that are no longer there, but they have the millions to blow on creative ad campaigns, for now. And spending millions feels good. Seeing your billboard downtown, or your commercial on television seems like a strategic win. At least you’re doing something, right?

Our concern is the message this sends to small and medium sized businesses. Maybe you’re looking at these tactics, and sensing that money thrown at media is the only way to reach your prospects.

The irony of Jared

Through my frustration of watching this episode of The Pitch, I couldn’t help but think about Jared Fogle.

Yes, good old Jared, the guy who told us — over and over — a compelling story of how he lost so much weight, simply by eating at Subway.

Now that was a story that sold.

During the duration of the Jared campaign, Subway sales more than doubled to $8.2 billion. Following Jared’s brief departure as Subway spokesman in 2005, sales immediately dropped 10 percent, prompting Subway to quickly bring him back.

As much as is possible in the 30 second format, it embodied many of the basic elements of good content marketing. It was useful. It was inspiring. It was educational. It was about benefits, not advertising awards.

Ironic that the company that spotted Jared’s killer story and ran with it for a decade now wants to play a game with “creatives” who figured being a starving artist didn’t sound so great.

Three steps to a successful approach

The equation used to be: money x media = business.

In other words, every company is a media company.

What does this look like in the real world? Here are three steps to creating a “campaign” that will last:

This is a very simple strategy that can be very difficult to execute. But it’s absolutely worth it.

If you had enough money, the good old days of brand advertising were truly good, like shooting fish in a barrel. Those days (and that world) are long gone, but the opportunities of the world we now live in dwarf the past.

One more time from Mr. Godin …

When I was coming up, the thought that I could have a million (or more) people hearing what I had to say was insane. But now, anyone who wants to — and is willing to put in the years, and get some lucky breaks — can do so.

The beauty, of course, is that most companies have no of need a million-person audience. Depending on your business, a mere fraction of that number will keep you busy for as many years as you’d like. The only real question is, what will you do now?

Previous article: How to Locate and Define Benefits that Turn Prospects into Buyers
Next article: How the Explosion in Online Education can Revolutionize Your Business