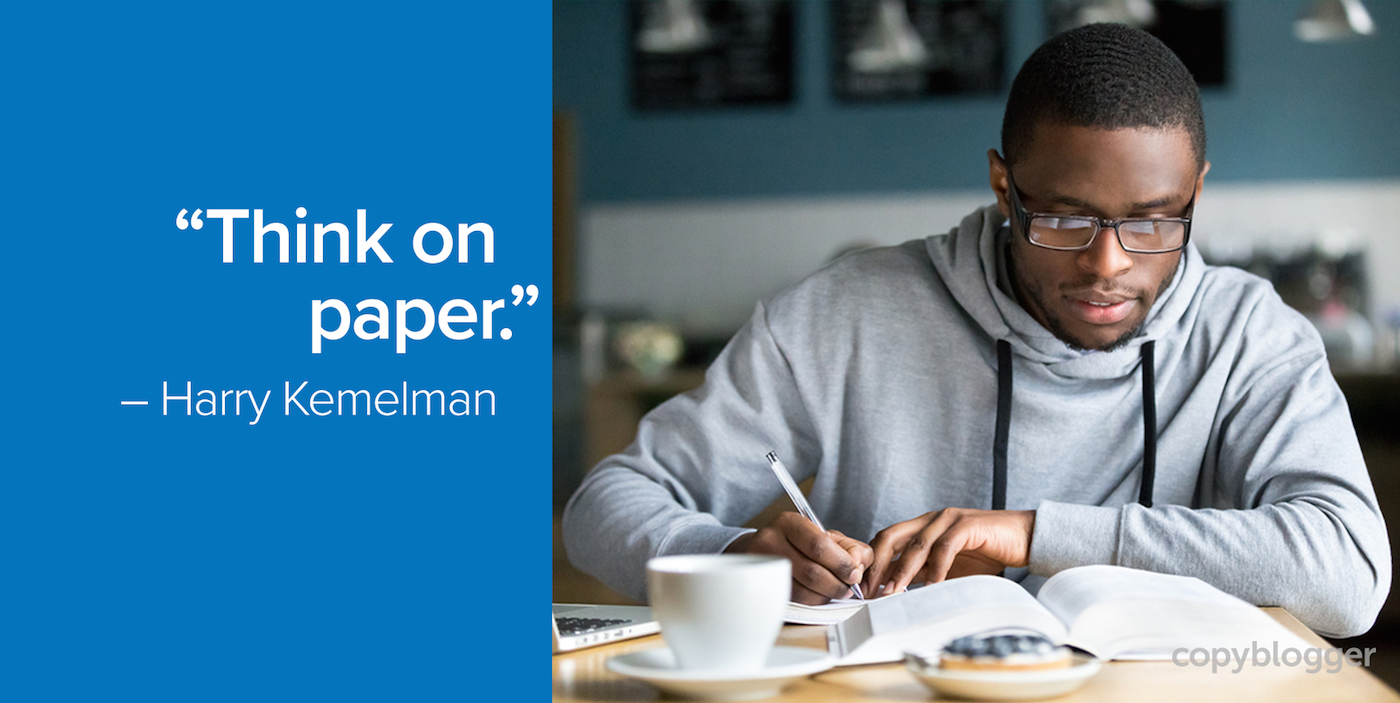 Whether you’re a pro content writer, fictionist, screenwriter, academic, poet, stateswoman, or bard-preneur (h/t Sonia Simone), you’ve likely experienced anxiety or elation about any number of the habits we all have in common.

Authors of all stripes share a deep connective tissue that compels them to congregate in coffee houses and taverns — across the globe — to tell one another stories of their travails over a beverage or two.

But there are five fundamental things that set serious writers apart from the rest.

1. Show up regularly.
2. Get started, no matter how inspired they’re feeling.

Showing up is an undervalued talent.

You could be a word-counter, time-blocker, Pomodoro technician, or an edge-of-your-seat procrastinator … all serious scribes show up regularly to write.

Frankly, it doesn’t matter how many words or how long you commit to butt-in-chair time … what matters is that you do it over and over until you have something of value for you, your audience, benefactors, clients, subscribers, or publishers.

A steadfast commitment to the art is part of your psychology

For The Writer Files podcast, I had the pleasure of interviewing writer and educator Bec Evans — co-founder of the digital writing coach Prolifiko — on the neuroscience of habit.

She and I spoke about the big impact of small habit changes on building a successful writing routine:

“Researcher, Dr. Robert Boice, studied writing productivity, and he always compared daily regular schedules, people who just write every single day, with people who binge write. And he found that on all measures of success, the daily habit wins.

“The only one that the binge writers scored more highly on was depression, because it was very much seen as people rushing to meet deadlines in a panic.” – Bec Evans

She reminded me that serious writers don’t wait for the muse to visit them before they start, and this is echoed by many famous writers I’ve spoken with over the years.

One pro journalist who subscribes to the Boice method, and sits down every weekday morning to write, is Guardian columnist Oliver Burkeman.

He also shared a book with me on the podcast by author Paul J. Silvia titled How to Write a Lot. In it, Silvia discusses the fallacy of writer’s block and the power of habit:

“You don’t need … special motivation to write a lot. You don’t need to want to write — people rarely feel like doing unpleasant tasks that lack deadlines — so don’t wait until you feel like it. Productive writing comes from harnessing the power of habit, and habits come from repetition.” – Paul J. Silvia

The power of simply starting is an incredible psychological tool for serious writers who want to learn how to overcome writer’s block.

The cursor blinks ominously in the pole position at the beginning of every piece of writing.

But as soon as you start a project, you are naturally compelled to want to finish it, no matter how long it takes. The human brain doesn’t like loose ends.

I spoke with neuroscientist Michael Grybko about some of the reasons why writers run into issues with deadline anxiety and the importance of developing a “pattern of positive thinking and accomplishment” to stave off writer’s block:

“Try to be more approach-motivated and [one tangible thing] we can do to help facilitate this is set obtainable goals, even small stuff.

“As you go through a project … ‘All right, I want to get this much research done today,’ your brain’s going to reward you a little bit … ‘Okay, here’s a little dopamine. Success. Way to go!'” – Michael Grybko

Scheduling a mere 10 minutes a day is all you need to start that habit. Sit down, open laptop, don’t move ’til words.

Habits and human potential author James Clear wrote an article titled “Why Getting Started is More Important Than Succeeding” where he noted:

“Being the best isn’t required to be happy or fulfilled, but being in the game is necessary.”

All serious writers know that small, incremental steps are the only path to achieving great work, and that you can’t edit a blank page.

Some of your best work will come by virtue of you wrestling with the words on the page, not in your head.

“Don’t think and then write it down. Think on paper.” – Harry Kemelman

When I spoke with New York Times bestselling author and co-founder of Wired magazine, Kevin Kelly, we talked about the importance of drafts and formulating ideas as you work:

“I don’t feel like I’m a writer. I write to figure out what I’m thinking … for me the killer thing is the first draft.

“I don’t have an idea to write; I write it to have an idea. So that means writing stuff that won’t be used, but I have to go through the process.” – Kevin Kelly

Once you start a project, your brain works on it in the background (what neuroscience calls the default mode network) and does some of the work for you, subconsciously.

All serious writers know that every inspired or brilliant page is typically preceded by a dozen shitty ones.

It’s all “grist for the mill”

In the book Several Short Sentences About Writing, the author, Verlyn Klinkenborg, talks about a serious writer’s job.

By giving yourself the opportunity to clarify your thinking while you write, you open yourself up to being more efficient and creative simultaneously.

“Where do sentences come from?

“How do they reveal themselves in your thinking?

“Sometimes you know exactly what you want to say. And you find the words to say exactly that.

“But just as often, what you want to say emerges as the sentence takes shape …. thought and sentence are always a collaboration.” – Verlyn Klinkenborg

Somewhere between the sentences, a subtext emerges from the interwoven ideas that occur as the work becomes … itself.

The blank page is a canvas you initially fill, however minimally or ostentatiously. Slowly but surely, serious writers pare the work down, or shore it up, to its usefulness.

Usefulness is what the reader takes away, not the length or the shape of the piece at its inception. Your initial keystrokes will likely never be seen by a reader.

4. Get bored, and understand it’s part of the process.
5. Meet their deadlines no matter the hardship or duress.

Writers need to remember that writing is a tedious and, at times, maddening endeavor. It ain’t sexy.

I asked the bestselling sci-fi author of The Martian, Andy Weir, about how he stays motivated:

“A great writer … I blanked on who it was … said, ‘Sometimes you’re writing and you’re extremely motivated, cranking out words … and other times it’s just a slog. Every word on the page is a huge amount of work, and you feel like crap, like you’re hammering away … it doesn’t feel good at all.

“‘One thing you’ll notice is, if you wait a week, and then look back on the stuff you wrote, you can’t tell the difference between when you were motivated and when you weren’t.’

“It’s really important to remember that the quality of your work isn’t greatly affected by the amount of enthusiasm you had at the moment you wrote it.” – Andy Weir

Deadlines are the pressure that make a diamond

Every serious writer I know also has a methodology that gives them a professional advantage to hit their deadlines. They’ve done it so many times it becomes second nature to them.

The award-winning creator, producer, and host of the megahit Lore podcast, TV show, and book series, Aaron Mahnke, came on the podcast to discuss his writing regimen and share some advice for serious writers.

We spoke about his commitment to creating the show like clockwork and why its success doesn’t give him the luxury of procrastination:

“I have to write and I don’t wait for inspiration or the right mood.

“I just sit my butt down and I write words. I’ll tell you a secret. The words you write on your most inspired day are 99 percent as good as the words you’ll write on the hard days.

“If you put them in a deck and shuffle them and ask somebody to tell you which one is better quality writing … those days where you struggle for the words are just as good.” – Aaron Mahnke

Without some kind of deadline, either self-imposed or professionally mandated, most writers become preternaturally lazy

New York magazine columnist and essayist Heather Havrilesky talked with me about meeting her multiple deadlines:

“Try to get into the zone quickly, and if there’s flow, just go with the flow no matter what kind of madness you’re writing. I find the more deadlines I take on, the better my writing flow is. Having a weekly column really helps there.

“I think people who have giant projects hanging over their heads, and they can’t get in the flow, they’re blocked. A lot of it is because they don’t have a daily writing exercise. Like any kind of exercise, if you’re not limber enough, it’s going to feel like you don’t even know how to do it.” – Heather Havrilesky

All serious writers meet their deadlines with ease, and they don’t sweat it because they have the tools at hand to keep the cursor moving until the job is done.

“There are writers. And then there are professional writers.” – Stefanie Flaxman

Personally, if I’m on a deadline, my office gets really clean. But I know that procrastination is part of my process, so I don’t beat myself up about it.

Multiple New York Times bestselling author Daniel Pink spoke with me about his incredibly consistent, workman-like process, and I often refer back to it for inspiration and as a model of true professionalism in writing:

“When I’m working on a book or it’s at that stage where I’ve done enough research, where I feel like I’ve more or less mastered a lot of the material and can move on to executing it, I actually think of it as bricklaying where I’ll come to my office, show up in my office at a certain time, like say 9:00 a.m.

Only serious writers have the ability to focus on what’s important and tune out what’s not.

Most turn off the internet, for the record.

It’s their deliberate practice, grit, persistence, commitment to growth, and inner drive that sets them apart.

What sets you apart?

Previous article: The Content Path: Moving from Attention to Action
Next article: Become a Writing Champion by Turning the Hard Stuff into a Game